Cars were jam-packed along the road in Chapel-le-Dale and also at Ribblehead but elsewhere parking spaces were virtually empty. We parked alone near Ribble Head House, and set off south over the Thorns Gill packhorse bridge (shown in 14) and past the ruins of the once-substantial Thorns Farm, once a grange for Furness Abbey, according to Hartley and Ingilby (1956). We had come to see, firstly, the Ribblesdale drumlin field which Waltham (1987) described as “Britain’s finest”. Waltham had been rather over-the-top about the Hutton Roof Crags karren as well (98) but he is not alone in enthusing about the drumlins. Many writers remark on this aspect of the Yorkshire Dales geology and landscape, often likening the appearance of the drumlins to (rather large) eggs in a basket.

According to Stephens (1990), “of all the features deposited by the last ice sheets, arguably the drumlin would rank as the most evocative of the former passage of an ice sheet” since drumlins are “unmistakably the work of the ice”. In the case of the Ribblesdale drumlins, ice sheets moved west from Langstrothdale into Ribblesdale and then swung south-west and south. These changes of direction are indicated by the orientations of the long axes of the drumlins. The ‘eggs in a basket’ effect is, I'm sure, best appreciated from the air – from a hot-air balloon perhaps – with a low sun casting shadows to show the shapes of the drumlins. On the ground one is aware only of walking up, down and around various smooth humps that are quite unlike the limestone crags on the valley sides.

After a pleasant hour or so navigating ourselves around the humps, we reached Nether Lodge, where we met a stream of walkers from the opposite direction. These were Three Peakers, taking the Bank Holiday Saturday opportunity to tackle the classic 24-mile walk over Pen-y-ghent (694m), Whernside (736m) and Ingleborough (723m). That’s why all the parked cars were there. Many of the walkers were clearly part of a sponsored group. It is the convention nowadays to do the walk anti-clockwise, starting in Horton-in-Ribblesdale. So these walkers had completed one of the three peaks (Pen-y-ghent) and had about 18 miles still to go. One of them asked us – since we were being a nuisance walking the wrong way but clearly looked exceedingly fit – whether we had already conquered two peaks, which would have meant having walked 18 miles clockwise from Horton since breakfast.

Ingleborough, from near Ribble Head House

Whernside, from near Nether Lodge, with the Ribblehead Viaduct in the middle 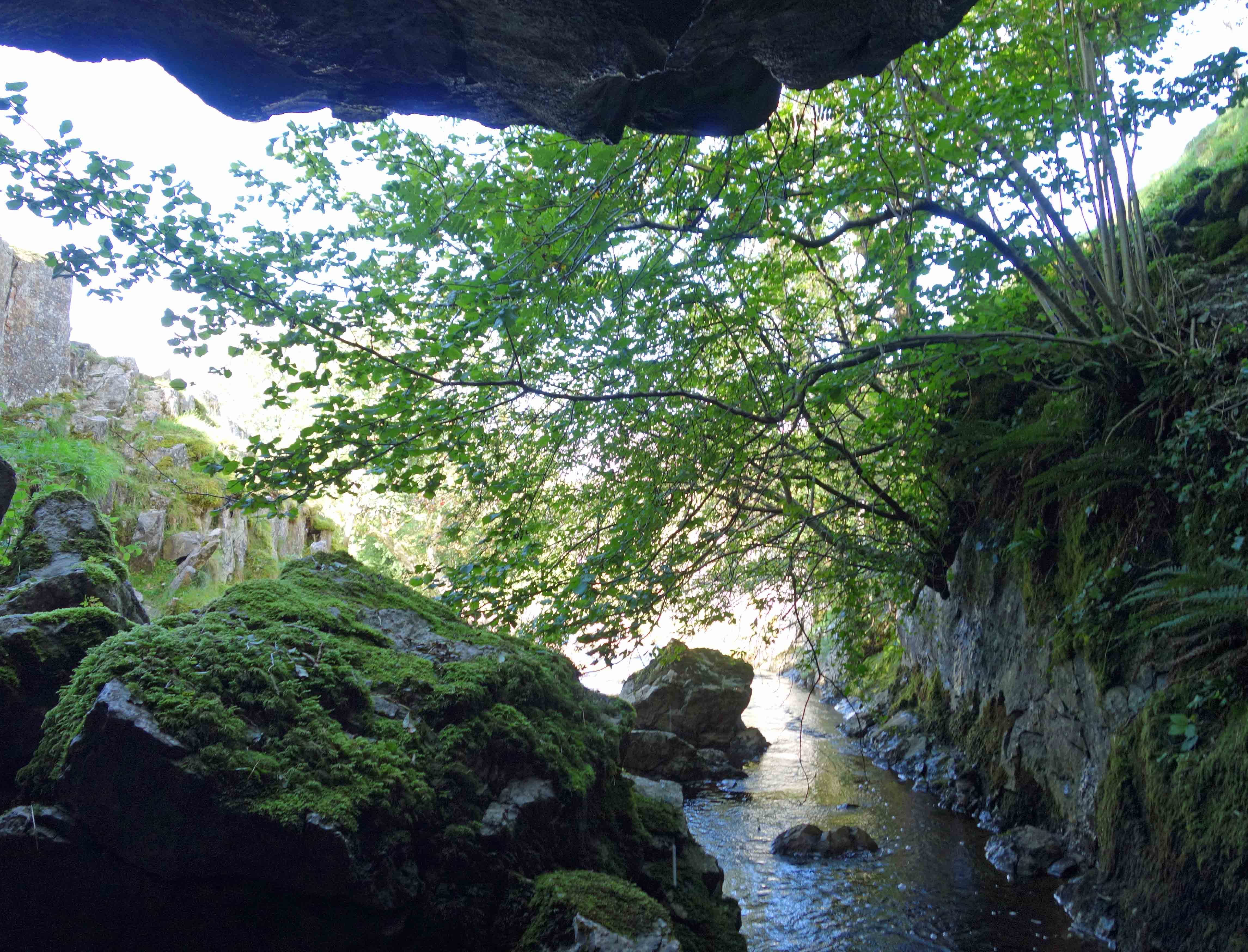 We paused at God’s Bridge, which is (as God’s Bridges usually are) a natural bridge formed, in this case, by a huge limestone slab lying across Brow Gill Beck. Of course, almost all the Three Peakers marched straight over the bridge as they didn’t have the time to pause to look at it. They certainly couldn't detour a little to see Browgill Cave - they might need every bit of time and energy later. Here the beck emerges from a rather impressive cave which it is possible to walk some distance inside, although there was too much water gushing out for us to do so.

We returned to the Three Peaks path to continue against the endless stream of walkers. Sheep looked at them, puzzled, wondering why they were all following in a line like, well, sheep. Who on earth thinks it’s sensible to take on these regimented marches, twelve hours of toil, aches and pains, blisters and sore knees, up and down three mountains?

We did – a long time ago, so long ago, in fact, that at the time our friends calculated that our son (who's now a summer chicken) was conceived on our Three Peaks walk. It was a more isolated and relaxed walk then, but not that isolated and relaxed. The Wainwright (1970) description of the Three Peaks walk comments at one point that “a decision must be taken: whether to trespass or not to trespass”. In those days, you made your own way, as best you could to avoid the quagmires, especially on the long trek between Pen-y-ghent and Whernside. Today’s walkers don’t need to make any decisions. They hardly need a map. The path is a reinforced thoroughfare most of the way and in any case all you need to do is follow everybody ahead of you.

We left the Three Peakers at High Birkwith, the residents of which must be mightily relieved that Three Peakers are now signposted well to the north of them, and dropped down past Low Birkwith, over the River Ribble, under the railway line, through the hamlet of Selside, and across the road and Selside Shaw to reach the area around Colt Park, part of the Ingleborough National Nature Reserve. Here, there are fenced off limestone crags where the native flora is protected to allow it to flourish (and where you need a permit to enter), fields where experiments are carried out to see how our flower-rich meadows may be restored, and at an old quarry a reserve where many relatively rare native plants may be seen. However, this was not the time of year to see flowers, so we resolved to return another time. Instead, we appreciated the play of light and shade on the drumlins across the valley.


&nbsp103.   Bogged Down around Rawcliffe Moss
&nbsp101.   Passing the Time at Heysham
A list of all Saunterings so far