I am often humbled by coming across people who seem incredibly knowledgeable on some particular topic, presumably after a lifetime’s dedicated study of it. Whilst contemplating a walk on Hutton Roof Crags I read a blog by Bryan Yorke. For years he has been reporting on his observations around the crags, especially on the flora. He kindly gives a list of 79 species of flora that he has found there. I had never heard of most of them but I was tempted to try to learn the names so that when I ventured onto the crags I could proudly identify plants from angular Solomon’s seal to zigzag clover, as the case may be (or even point out Polygonatum odoratum or Trifolium medium, if I had an impressionable companion, which I don’t).

But then I read Tony Waltham’s book called Yorkshire Dales: Limestone Country (Waltham, 1987), which includes a section on Hutton Roof Crags. He doesn’t mention the flora once – not just in the Hutton Roof Crags section but in the whole book. He is much more interested in crags, cliffs, caves and potholes. As far as Hutton Roof Crags is concerned, he enthuses about the karren, a term which again I am not sure that I had ever heard of. These he considers “spectacular” and “on a scale unmatched elsewhere in Britain, and account for Hutton Roof Crags being so widely known”. So, obviously, I must try to find the karren.

As far as I can determine, Yorke’s blog does not discuss the karren at all, or any other geological feature much. Clearly experts have their niches and stay deep within them. They look at the same things but see them differently. I must moderate my ambitions: I cannot hope to acquire an expert’s depth of knowledge in everything. So I set off towards Hutton Roof Crags with some optimism that I could locate the karren, with Waltham’s guidance, but as far as the flora goes I would just set out to spot interesting plants that later I would try to identify from Yorke’s list. 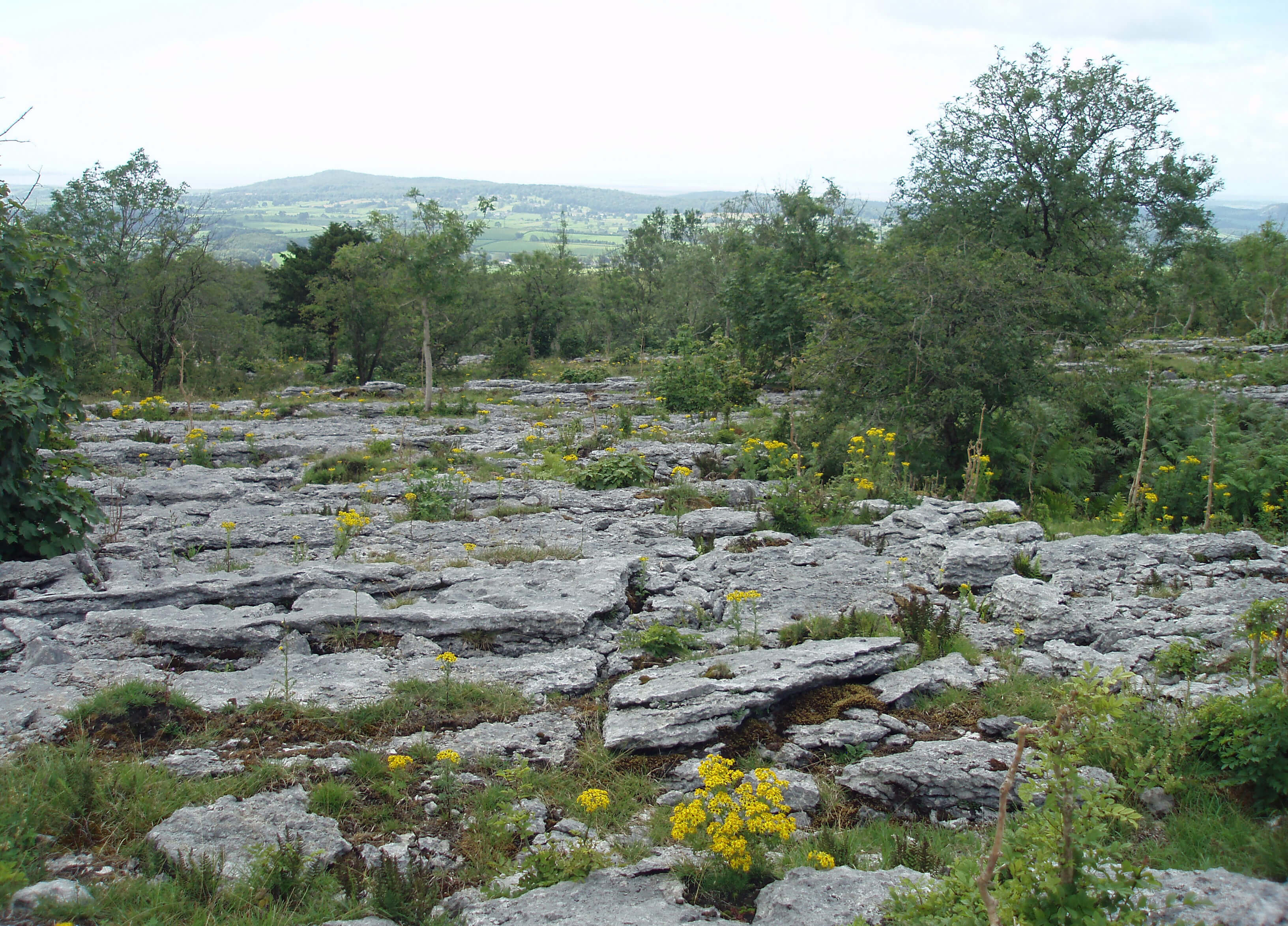 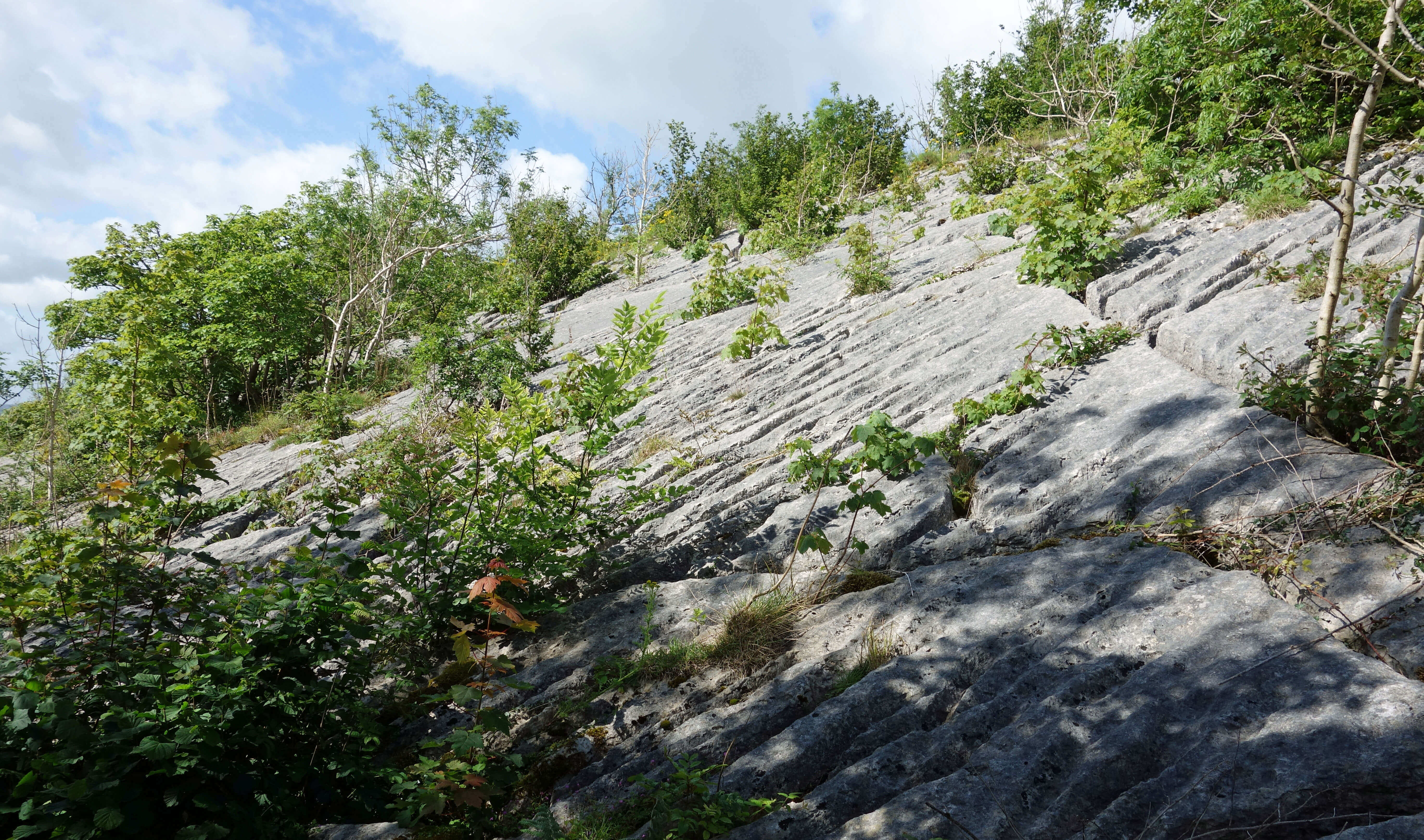 We walked from Plain Quarry to Hutton Roof, passing the National Nature Reserve of Park Wood, and headed up Blasterfoot Gap. The bracken was high. It’s a shame that Hutton Roof Crags is so overwhelmed by bracken that in many places it is hard sometimes to locate the paths and almost impossible to walk off them. However, we could see The Rakes off to the left, with a path towards them. Karren (or, to be precise, rinnenkarren, according to this website) are long, parallel grooves caused by rainwater dissolving the limestone, the grooves becoming wider and deeper lower down the limestone. The Rakes karren (shown right, with a general view of Hutton Roof Crags further right) were not, to me, a particularly impressive sight. I have seen similar elsewhere, without knowing a name for it, because limestone always shows signs of water erosion although it does, of course, require a considerable expanse of sloping rock, as at The Rakes, for a whole vista of such grooves to form.

We walked up, with views to the Lakes and Dales and Morecambe Bay, dropped down to the road below Farleton Knott, followed the bridleway to reach Lancelot Clark Storth (what a name for a scrubby wilderness!) and continued up to the trig point. All the way we kept our eyes peeled for flowers – but we didn’t see much variety. The most prevalent was a tall, handsome one, with fine yellow flowers (shown left). The centre of the flower was 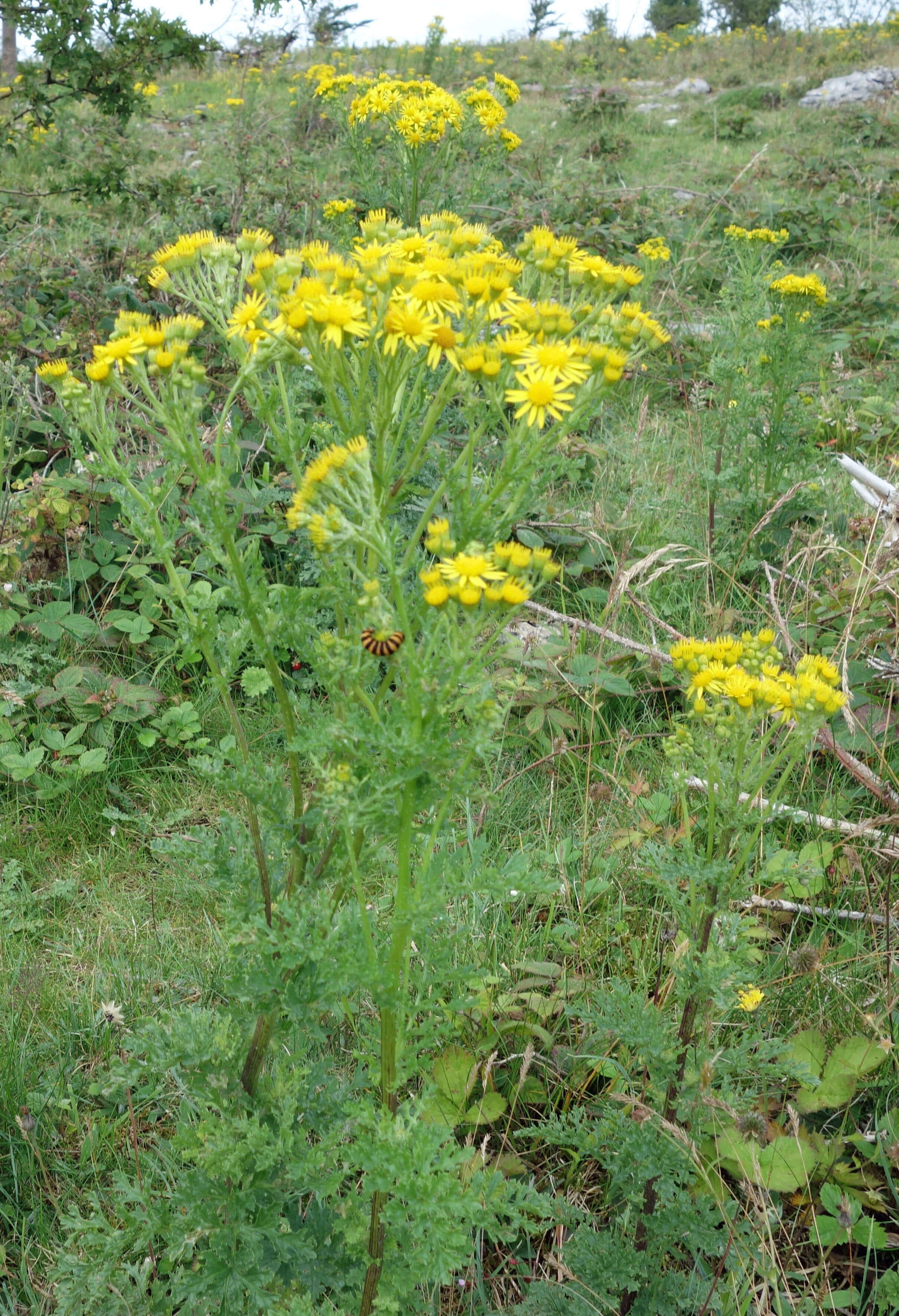 like a mini-sunflower, from which spread a dozen or so rays, with curls at the ends. The flower-heads grew in clusters to provide a welcome splash of colour to the bracken-dominated crags. I have searched carefully through Yorke’s 79 species but cannot find it there. I will have to email Mr Yorke to inform him that he has missed one.

No, of course, the yellow plant is ragwort, which is regarded as a weed by most people, especially owners of cattle and horses, for whom ragwort is poisonous – the cattle and horses, that is, although no doubt the owners too if they were foolish enough to eat it. Similar may be said of the cattle and horses: they are not normally foolish enough to eat it (Hutton Roof Crags has some distinctive Red Poll cattle, a breed that has its own Society: I think people can join too). They will only do so if the ragwort has been sprayed so that it doesn’t look like ragwort, or if the ragwort is included in hay for them, or if they are desperately hungry. So it’s us that have made ragwort a danger to cattle and horses. 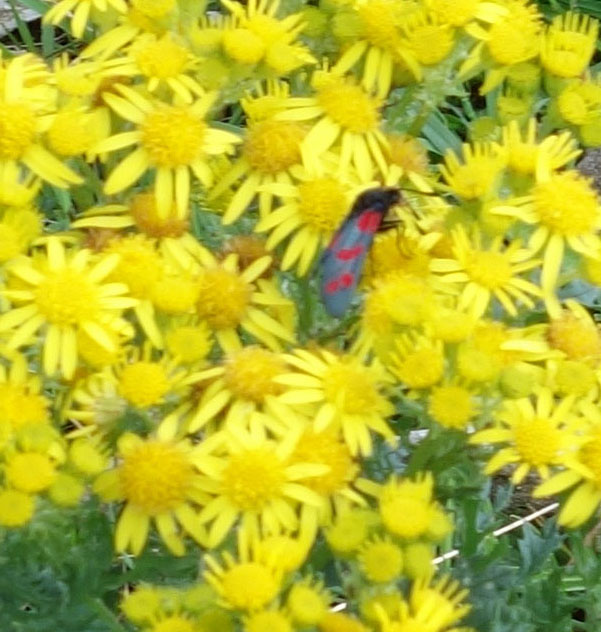 Nonetheless, the cattle and horse-owning lobby persuaded the government to introduce the Ragwort Control Act of 2003, although it was watered down somewhat when it was pointed out that the ragwort is important to many insect species, including some rare ones. The most gaudy of these is the cinnabar moth. We amused ourselves by looking for its caterpillars, which have gold and black stripes (there is one on the ragwort left, shown in close-up, near right). We also looked for the moth itself, but saw only one (shown far right).

If I had memorised Yorke’s 79 species names then I would still know very little about the species. Most of the names are meaningless although some (for example, spring cinquefoil) give a hint of some property. Old dialect names are sometimes more informative – those for ragwort include stinking willie, yallers, mare fart, summer farewell and staggerwort.

A recent book, called Pudding-Pokes, Flittermice and Bishy-Barney-Bees (Brewer, 2020), catalogues dialect names, many of which are dying out. The title’s bishy-barney-bee, for example, is a Norfolk name for a ladybird. It may seem a childish name to you, in which case I must have been ultra-childish because to me it was usually the bishy-bishy-barney-bee. It still is. In company I feel obliged to call it the ladybird, but with some reluctance because bishy-bishy-barney-bee at least tells me one thing (that its red and black resembled the garb of a bishop) whereas the name ‘ladybird’ is just plain silly. Ladybirds aren’t birds and half of them aren’t ladies.


&nbsp99.   Heather on Hawthornthwaite Fell
&nbsp97.   Remeandering the Lyvennet
A list of all Saunterings so far