Part of the Lyvennet was remeandered in 2014. We went to see if there were any sign of it now – and to walk in the quiet Lyvennet valley, which is tucked away in the rural region between Appleby and the M6 at Shap. The Lyvennet arises on Crosby Ravensworth Fell as Lyvennet Beck, flows north for about ten miles through the villages of Crosby Ravensworth, Maulds Meaburn and King’s Meaburn to join the River Eden near Temple Sowerby, having become the River Lyvennet somewhere along the way.

We tackled a figure of eight route from Crosby Ravensworth. First we walked north-east to the ruins of Crake Trees, once a two-storey tower house. It is of 14th century origin and was abandoned in 1881. As ruins go, this one has gone far – but it has returned a little. According to a man we chatted to, a lot of money has been spent restoring the ruin so that it is at least safe – so much so that we were encouraged to walk around it. But why preserve a ruin in a particular state? I prefer a ruin to be left to disintegrate, naturally.

The ruins of Crake Trees 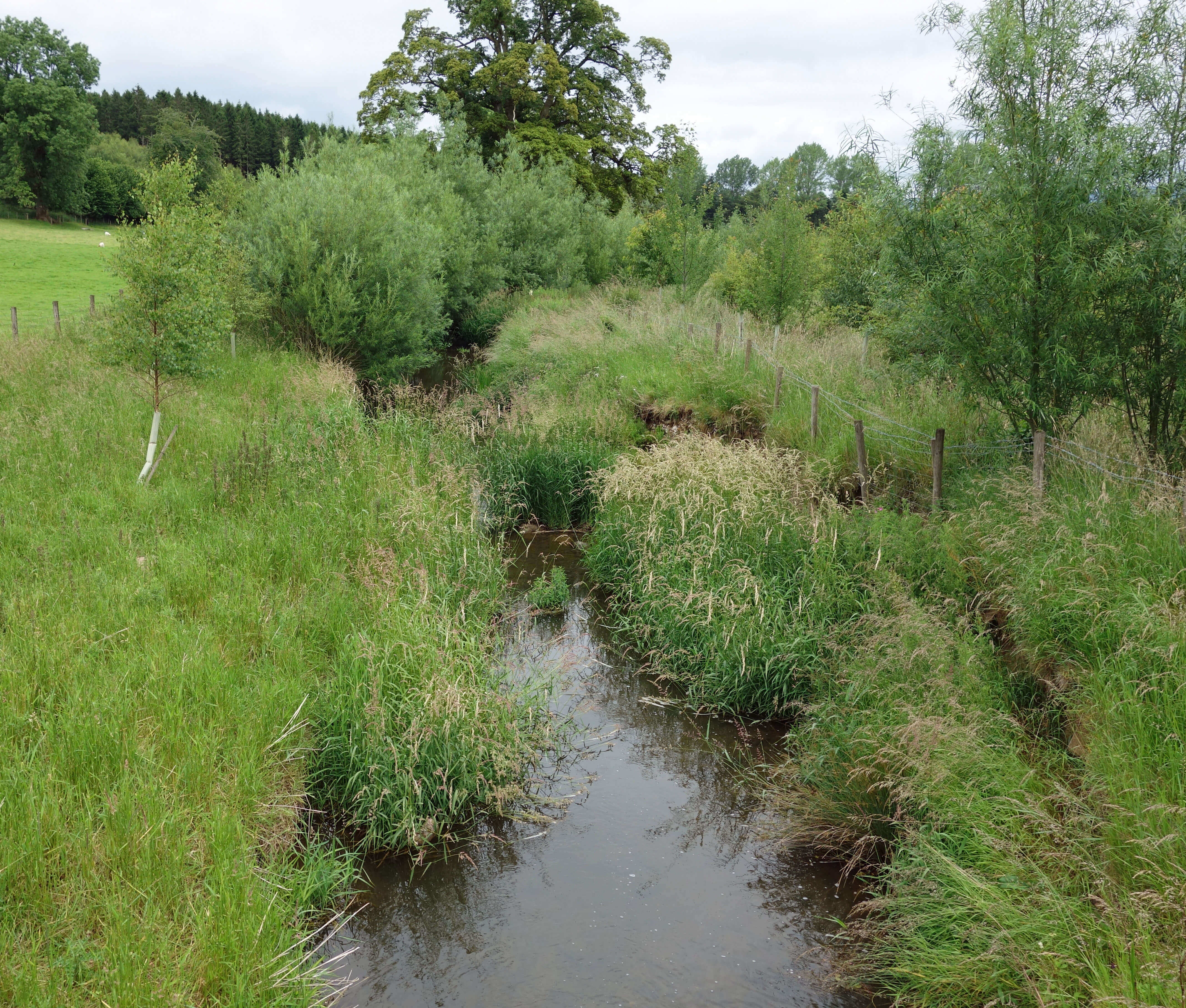 We walked on, with views of the North Pennines, to Howebeck Bridge, which is over Howe Beck (shown right), and Dairy Bridge, which is over the Lyvennet. It is here that the remeandering was carried out but, not knowing what the watercourses were like before, we would never have suspected. The only indication of work on the watercourses was the fences on the banks to keep out cattle and so enable luxuriant vegetation to flourish. The banks seemed overgrown. On reflection, however, it is clear that this is their natural state. It is the other banks that are undergrown because sheep and cattle nibble and trample them.

A watercourse naturally forms meanders because erosive forces are greater at the developing bends. Over the centuries, therefore, a river becomes more meandering (except when it cuts across the neck of a meander). Most of our watercourses have been demeandered (that is, straightened) at some time, mainly so that riparian land-owners may gain more usable land that is less liable to flooding – although hurrying rainwater downstream may cause flooding there instead. However, a straight river channel, through which water shoots unnaturally fast, is not good for wildlife. The bed is eroded faster, river sediment is less likely to settle, small insects cannot survive, and the fish and the birds that depend upon them will disappear. Consequently, there is a programme to remeander rivers, that is, to reinstall or create meanders where a river has been straightened. Of course, this may not be possible where there has been building on the bank or where the landowner objects.

Remeandering is one of a class of ‘rewilding’ projects that acknowledge that our attempts to interfere with nature have caused problems and that sometimes nature had evolved to know best. Elsewhere in North-West England there are projects to ‘resaltmarsh’ farmland that has been claimed from saltmarsh, to ‘rebog’ moors by blocking drains added to improve farmland, and to ‘reforest’ hills from which we have removed trees.

We next came to the village of Maulds Meaburn. Is it for real? It looks like a Hollywood film director’s specification for an olde Englishe villagee, with a large meadow, a few sheep, a gentle stream, some neat bridges, and stone cottages scattered about on both banks. However, they seem to have forgotten the village shop, pub, school and church. Is there any village life? What do the villagers do? There are a number of footbridges, benches and picnic tables for villagers to wallow in the prettiness, but none were doing so when we passed through. We noticed one house with a blatantly modern frontage. I bet all the neighbours disapprove.

Maulds Meaburn is, in fact, an ancient village, with the map showing narrow fields stretching out behind the cottages, presumably a remnant of medieval strip farming practices. The name of Maulds Meaburn comes from a disagreement in the 12th century between King Henry II and the landowner Sir Hugh de Morville which resulted in the king taking ownership of part of the land (within which lies King’s Meaburn to the north) and leaving the rest to Hugh’s sister Maud. The Meaburn part means ‘meadow stream’, of course.

We then walked on past Flass House, which has a shorter but more melodramatic history than Maulds Meaburn. The house was built in 1851 in an Italianate style, with twenty bedrooms, for the brothers Lancelot and Wilkinson Dent, opium dealers. I expect that there will be a campaign soon to regard opium dealers as we now regard slavers. The Dent family left in 1973 and in 2000 the house was bought by a couple, the wife of whom had written ‘Devil Woman’, which was Cliff Richard's biggest US hit. They separated, leaving the husband to manage Flass House, which he found he couldn’t do without the help of a gang of cannabis-growers. The five gang members and the husband were jailed for a total of 39 years in 2015. The house then went to pot as it was vandalised after encouragement by an intruder's Youtube video. (The video is still on-line: why Youtube continues to show what seems to be an illegal activity and why the video-makers aren’t charged I don’t know.) The house was sold for Ł500,000 in 2019. There were some cars parked but we could see no sign of renovation work.

We duly arrived back in Crosby Ravensworth. An advantage of parking at the middle of a figure of eight route is that you can leave the food in the van and have a leisurely break there in the middle of the walk, which we did, beside a beck (Dalesbank Beck) that runs prettily under small bridges and by the imposing St Lawrence's Church to join the Lyvennet, with swallows, swifts and martins swirling about.

The second, lesser, half of the walk was a simple stroll upstream by Lyvennet Beck, over Holme Bridge, along to a footbridge, and back on the other side. It was very pleasant and peaceful although we saw nothing of particular interest, other than many pink granite erratics. The beck was crystal clear, as it needs to be if it is to continue to host the rare white-clawed crayfish. As far as I could tell, the beck had been protected and straightened as usual, without any major remeandering. I wonder how effective remeandering is if it is only carried out on a small part (say, half-a-mile) of a longer (say, ten-mile) river. If salmon, say, cannot cope with the straight, fast (nine-and-a-half mile) parts then they may never get to appreciate the meandering, slow (half-a-mile) part.

Whatever, I am all in favour of remeandering myself.


&nbsp98.   Karren and Flora on Hutton Roof Crags
&nbsp96.   Castles and Towers from the Cross of Greet
A list of all Saunterings so far