95. &nbspBarbondale and the Dent Fault 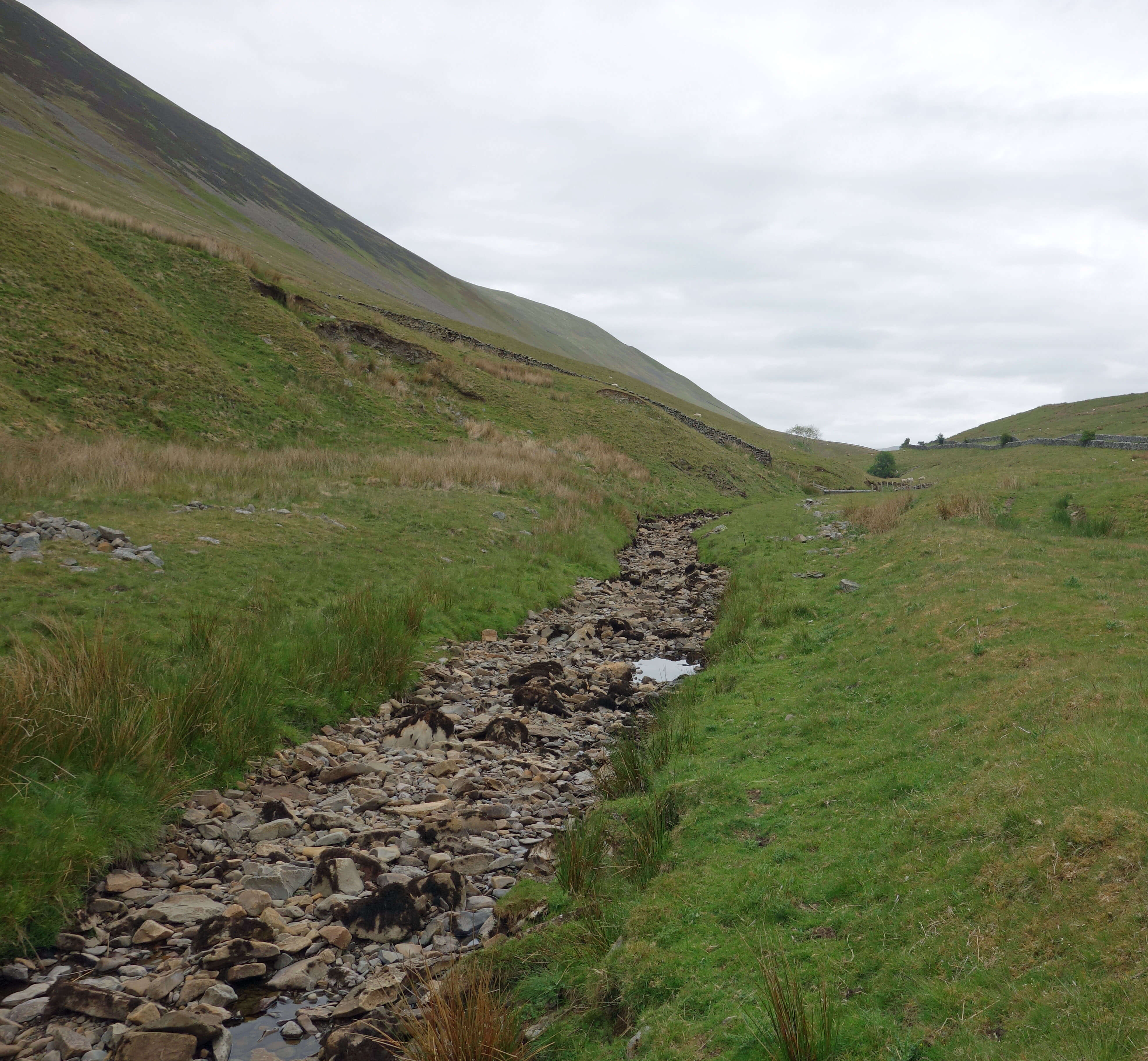 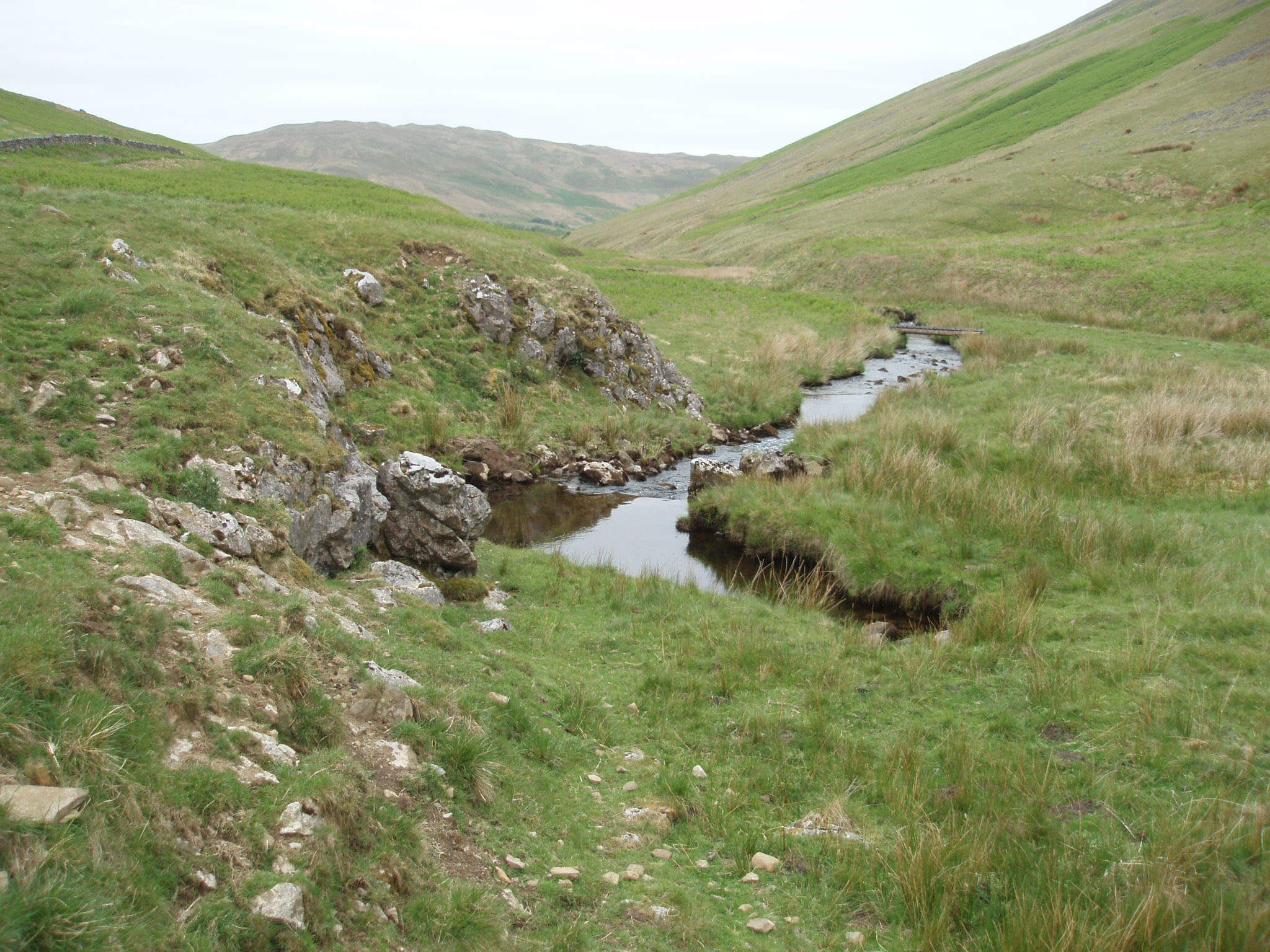 In 1831 Adam Sedgwick (1785-1873), Dent-born Professor of Geology at Cambridge University, presented a paper to the Geological Society of London in which he described, for the first time, a fault ōpassing along the south flank of Casterton Low Fell, up Barbondale, thence across the valley of Dent, through the upper part of the valley of Sedbergh, and along the flanks of Bawfell [now spelled Baugh Fell] and Wildboar Fell [Wild Boar Fell], to the ridge between Mollerstang [Mallerstang] and Ravenstone dale [Ravenstonedale]; and that along the whole of this line there are enormous and most complex dislocations ģ The ruptures produced by it are fortunately on a scale too great to be overlooked or misunderstood.ö

I am capable of overlooking and misunderstanding anything but with SedgwickÆs strong hints about what to look out for we set off north from Blindbeck Bridge, walking on the west bank of Barkin Beck. We passed our inexpert eye over the rocks on the slopes up to Calf Top of Middleton Fell ¢ a grey slate, it seemed. A dipper or two were happy to lead us upstream although the grey wagtails seemed more agitated. The beck was low but flowing contentedly enough until, after a mile or so, just before Short Gill Bridge, it split into two. The left branch (shown left, looking upstream) was dry. The right branch (shown right, looking downstream) flowed only a short distance and was issuing from under a large rock.

We had reached limestone, through which water disappears to emerge later at a resurgence when it meets a lower impermeable layer. We were therefore on or across SedgwickÆs fault, now called the Dent Fault. The Dent Fault is one of the most important geological features in North-West England. As Sedgwick said, it runs roughly between the two Kirkbys (Lonsdale and Stephen). It divides the Silurian rocks of the Howgills and Middleton Fell (to the west) from the Carboniferous strata of typical Dales landscapes (to the east). The former are some 70 million years older than the latter. The Dent Fault thrust the Silurian rocks upwards and is, I read, one of the best examples in England of a reverse fault, as opposed to a normal fault, where the displaced rocks move downwards (it is called normal not because it is more common but because it seems natural to imagine gravity causing rocks to fall). A reverse fault is caused by compression, with tremendous forces along the line of the fault. 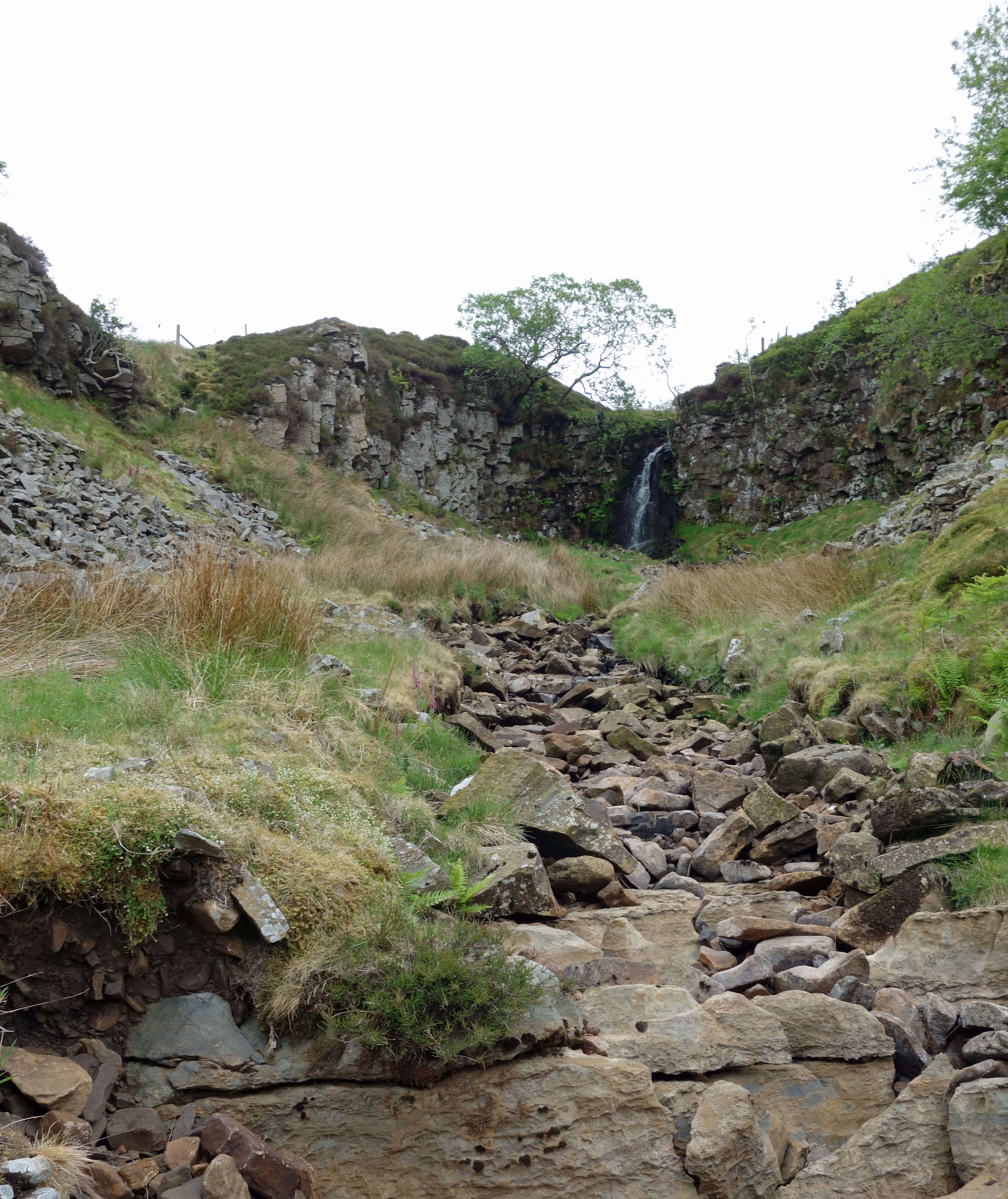 However, walking alongside Barkin Beck we had seen no sign of the promised ruptures. These only became apparent to us as we walked up beside Short Gill. Here, a prominent ridge of limestone, unlike anything on the smooth slate slopes opposite, had been distorted, with some strata appearing to be on end. The only previous time that I have visited Short Gill I walked down beside a bubbling beck that suddenly disappeared at the limestone ridge to leave a weird silence. Today, though, the bed of the beck continued to be dry for some distance as we continued up, until we reached an upper waterfall (shown right), below which the water immediately disappeared through rocks.

We emerged from the Short Gill ravine to tackle the long slog up to Crag Hill (682m). Rounding one bend we came upon a buzzard perched on a post just ten metres ahead. It didnÆt notice us for a while. It was probably focussed on the voles. I have never seen so many voles on one walk ¢ they were constantly catching our eye as they scuttled into their little burrows ahead of us. From Crag Hill we could see as far as Pendle, Black Combe and Wild Boar Fell but it had remained overcast so that everywhere was a rather dull grey.

The walk down past Richard Man and over the moor was of little interest. We heard two cuckoos, or rather two cuckoo calls from one cuckoo - a rather plaintive end to its cuckooing season. We passed a few shakeholes that told us that there was limestone underneath but there was no clear ridge as at Short Gill. We must have crossed the Dent Fault again but noticed nothing that emphasised its presence.

You have to admire the chutzpah of early geologists. The science of geology had only existed for a few decades and its early practitioners necessarily knew nothing of, for example, the theories of glaciation and plate tectonics but nevertheless they were bold enough to say that features which humanity had not previously paid any regard to cannot possibly be overlooked or misunderstood. After all, at that time most people in Britain read the first sentences of the Bible, saying that ōIn the beginning God created the heaven and the earth. And the earth was without form and voidö, and considered that to be the end of the matter. Sedgwick was himself ordained as a priest but that didnÆt stop him trying to impose form upon GodÆs creation and finding faults with it.


&nbsp96.   Castles and Towers from the Cross of Greet
&nbsp94.   Away from It All on Caton Moor
A list of all Saunterings so far