103. &nbspBogged Down around Rawcliffe Moss

In 1745 the weather caused an event five miles west of Garstang the like of which will almost certainly never be seen in Lancashire again. The event itself was not the most spellbinding but the fact that it happened in 1745 and that similar wonĺt happen again tells us something about the history of the region. On this walk I encircled the site of the 1745 event.

I began from the eponymous church of Churchtown, that is, St Helenĺs, which I understand is called Ĺthe Cathedral of the Fyldeĺ. This tells me two things. First, that there is no actual Cathedral of the Fylde, and quite right too because the Fylde is flat and it would be unseemly for a spire to puncture the vast skyscapes, although there is in fact a tiny spire on St Helenĺs, hosting a weather-vane. Secondly, that this church, fine as it may be, is not a cathedral, which is good to know because I couldnĺt define what a cathedral is. Does a cathedral have to have a spire? Does a spire have to be spiral? 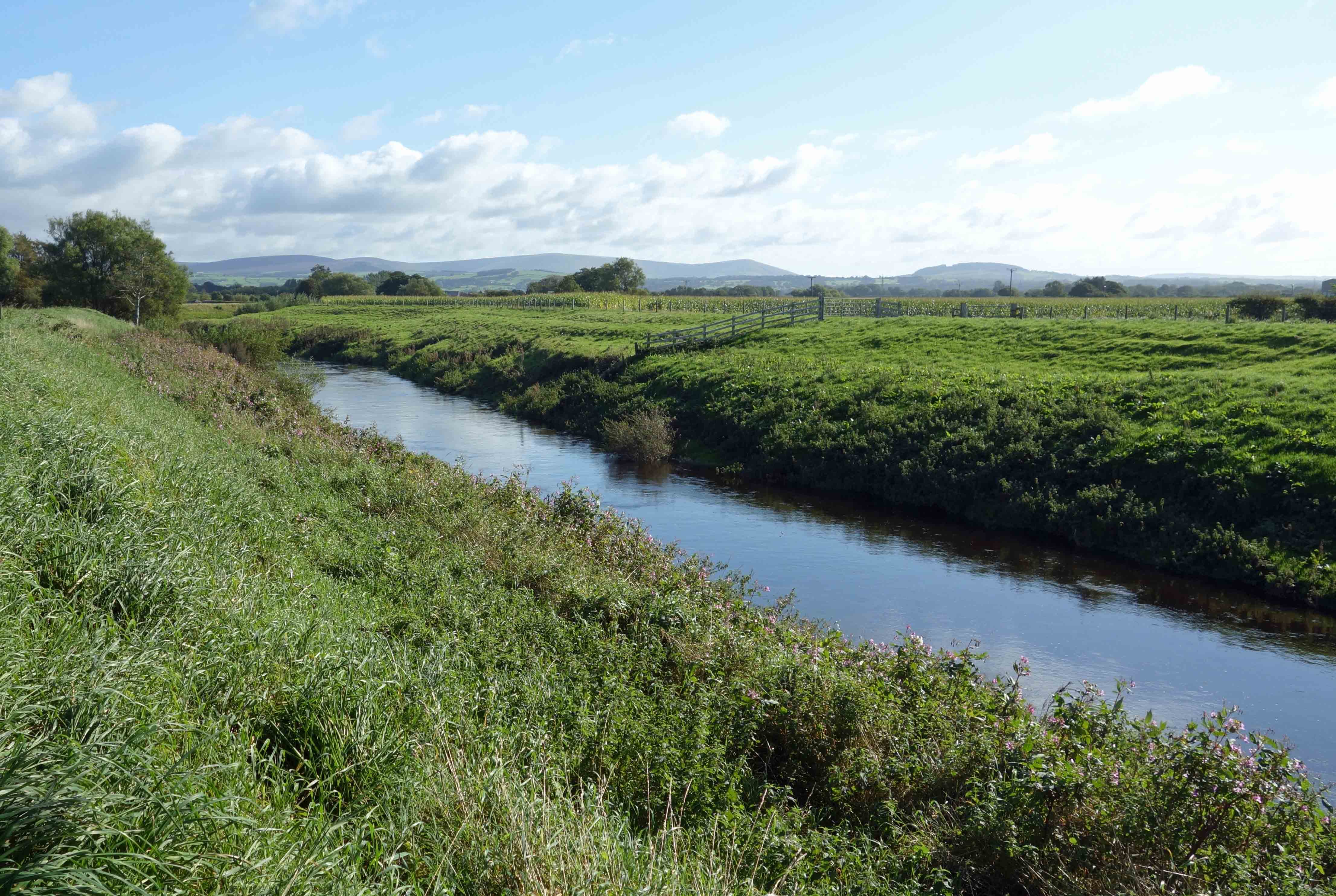 I followed the Wyre Way westwards, through the sickly sweet smell of rampant Himalayan balsam, ameliorated somewhat by the sewage works. After a mile the Way left the River Wyre for the A586, which wasnĺt much fun, and passed a sign saying St Michaelĺs-on-Wyre, which caused me some angst. When I started these Saunterings I resolved, when in doubt, to use the Ordnance Survey spelling of place-names. However, not many people spell Haystacks as Hay Stacks or Scafell as Sca Fell as the OS does, and when it comes to compound names like St Michaelĺs-on-Wyre the OS is not consistent in its use of hyphens. In this case, the OS opts for St Michael's on Wyre. But surely the people who put up road signs should know. Within the village it is invariably St Michaels, with no apostrophe.

So distracted was I that I walked through St Michaelĺs-on-Wyre without noticing anything of it, although I did pause at the end of it, at the church, St Michaelĺs (of course), which is, like St Helenĺs, a Grade 1 listed building. I continued by the Wyre, which according to the OS map is at its tidal limit at this point. Since the Wyre still has fifteen miles to go to reach the estuary at Fleetwood it obviously has a sedate journey from here. The Wyre is now snug between high banks to prevent flooding, which meant that when I left the Wyre to walk along the quiet Rawcliffe Road I could no longer see it. I then passed Horrockses, whose sign said that it was a ôCuriosity Shop, Dress Agency and Hat Hireö, which perhaps is just what the few locals need.

Beyond Ratten Row I walked north away from the Wyre, climbing all of about five metres, to survey the scene. But there was nothing to see, in all directions. It was flat for miles, like the Australian outback. No, flatter ľ and greener ľ and wetter ľ and without the kangaroos. I will need to take a Creative Writing course to describe the scene adequately. In the meantime, I can only say that there were many fields, most green and a few yellow, some with sheep or cows or horses. I had seen maize by the Wyre but from here on I saw no crops. The first of the farms passed was the wryly named Belle Vue. At least, thatĺs what the OS map says. As elsewhere in this region, the names given on the map often donĺt seem to be owned by any particular building. 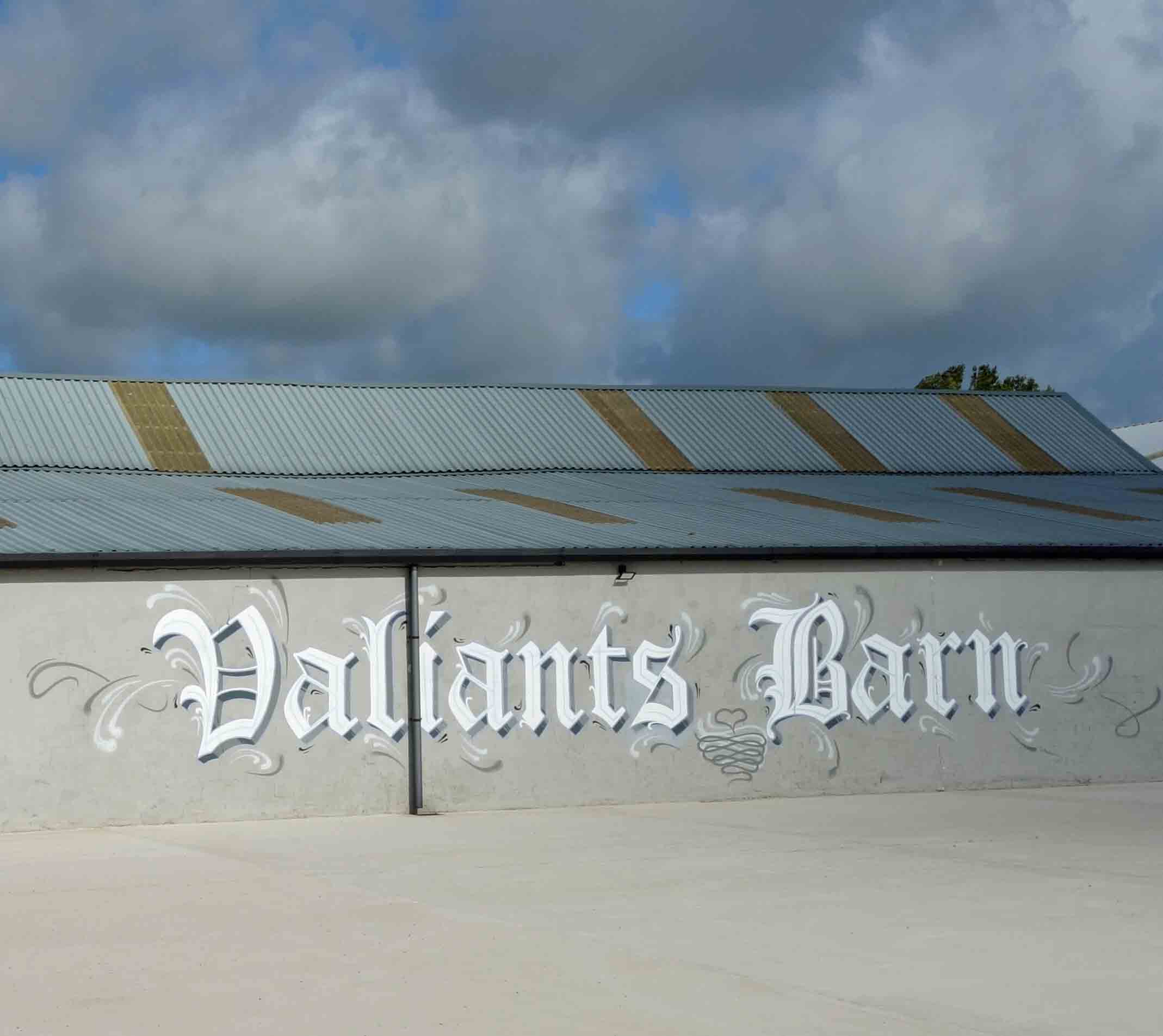 However, Valiantĺs Barn displayed its name in large ornate letters (I couldnĺt work out why).

Passing Wilson House Holiday Park, I turned east on Skitham Lane, which I followed for three miles. It was the most tedious three miles I have walked since I started these Saunterings. While I think of something interesting to say about it, hereĺs a question: Where would you say is the heart of Lancashire? The county of Lancashire is, of course, much smaller than when it included Manchester, Liverpool and what is now south Cumbria, but it is still large enough to have a heart. Where?

I passed a place that sold ľ what? Have a guess (Iĺll tell you at the end of the paragraph). And on through Skitham, a name that probably derives from the old English Ĺscitanĺ, from the proto-Germanic Ĺskitĺ. The Ĺkĺ has softened in modern English. Ah, now, I am sure that you are agog to know what happened in 1745. An analogy may help. Imagine that you made a sponge cake but it was too soggy. You trimmed off the collapsed edges so that the cake had a neat little wall. Then you accidentally left the cake in the rain. The sponge continued to absorb the rainwater ľ until it could absorb no more, at which point the cake Ĺburstĺ and flattened itself over a wide area. (Sliding-door wardrobes ľ did you guess it?)

A Ĺbog burstĺ occurred on Rawcliffe Moss in 1745. The bog was a raised mire, which is naturally higher in the centre but in this case was unnaturally considerably higher because the surrounding peat had been removed for burning and the land had been drained, causing further shrinkage to lower the land. A similar situation can still be seen today at Winmarleigh Moss to the north, a small bog but the largest remaining in Lancashire, where the bog stands rather weirdly perched a metre or two above surrounding farmland, which is not what you expect of a bog. After heavy rain saturated the Rawcliffe Moss bog it collapsed to spread its contents over a wide area. A witness said that the centre of the bog sank to leave the bed of a river a mile long and half-a-mile wide.

The reason that a similar bog burst will not occur in Lancashire again is that there is little similar bog left. People in Fylde continued to extract peat for burning until the 1950s and the land has been comprehensively drained. The old bogs of the Fylde are now criss-crossed by many ditches, creating rich pasture. The outcome of the peat extraction and the drainage is that the land is now lower than it was and therefore at higher risk of sea-flooding, which is, of course, why the Pilling Embankment was built in 1981.

I had achieved my main ambition of the day ľ to see the site of a bog burst, although no evidence of it remains today ľ but now what? I didnĺt think I could cope with any more excitement so I walked on to the village of Nateby. Actually, there was no alternative. The road went on, above the level of the fields, so that I could be sure that I wasn't missing anything. I passed Trashy Hill, as anybody would. Hereabouts, any eminence that it is a couple of metres higher than the fields is called Something Hill. How droll. 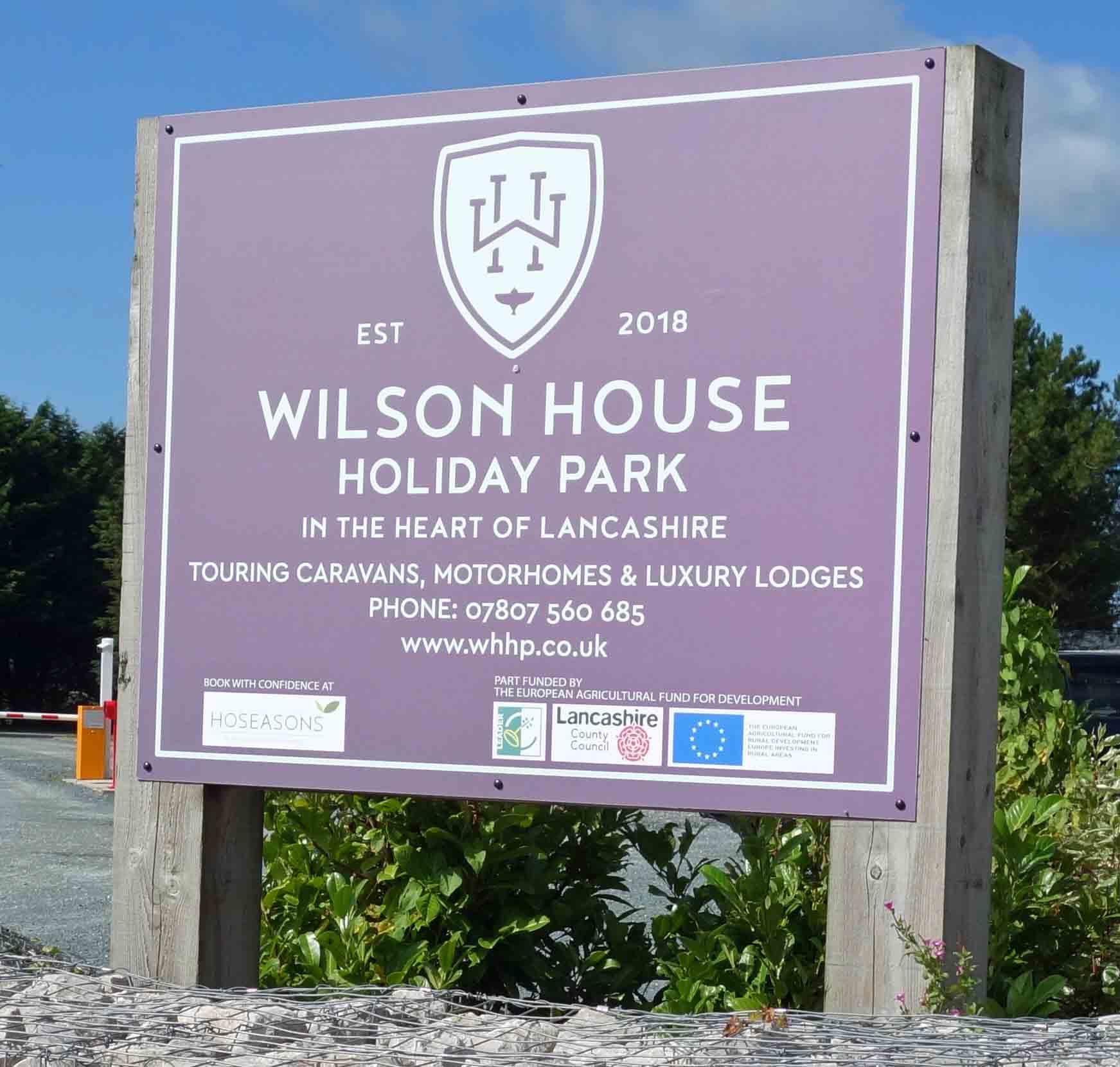 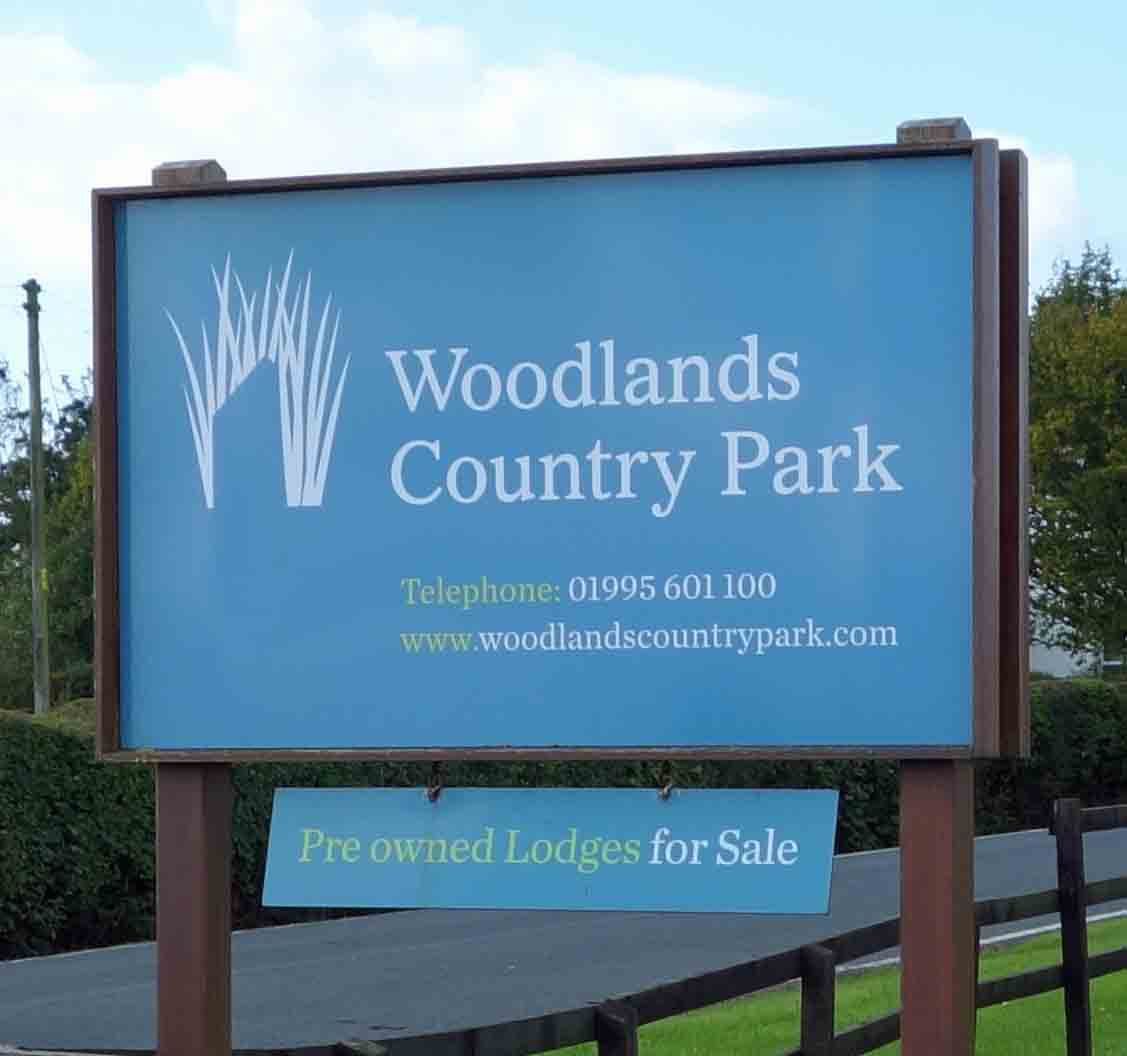 So, where is the heart of Lancashire? The Wilson House Holiday Park is in it, according to its sign. Myself, Iĺd say that this Park is in the middle of nowhere. The sign says that it was completed in 2018 after EU funding. Oh for the days when we could pay our taxes, have our government send money to Brussels, for a committee there to decide that a Holiday Park here is just what this region needs. I next passed Woodlands Country Park, with an ornamental entrance. Somebody has spent a lot of money here (the sign didnĺt mention the EU this time). There must be a bigger market for people who really do want to get away from it all than I thought.

I approached Nateby with some trepidation because the only previous time that I had visited (in 2007) I was suspected of loitering with intent. At that time, the Nateby region was in a spasm of excitement because someone had thought heĺd found the remains of a Roman road (a side-road from the Lancaster-Ribchester road to the Wyre estuary) and someone else had thought heĺd found, from aerial photographs, a huge circular henge. I hurried then to visit before hordes of tourists engulfed this would-be Stonehenge of the North. I parked near the school, had a snack and prepared to set off while the kids ran about the playground. They were ushered indoors and two teachers came out to ask what I was up to. I mentioned the Roman road and the henge, which reassured them that I was a weirdo but one harmless to their children. There has, I think, been no more news about the henge (which there surely would have been if it were significant) and the news about the Roman road is that it is unlikely to be one.

This time I stayed clear of the school but I wanted to see the church again, or rather the sign on the church. I realise that this is a touchy topic but I have to say that Christians sure make it hard for someone like me. Love thy neighbour is all very well as a principle but in practice it seems that Christians hardly love one another. Any slight disagreement over some sub-clause of the Christian faith leads to another group flouncing off and setting up yet another ľism, with its own churches and so on. Lutheran, Anabaptist, Waldensian, Catholic, Presbyterian, Congregational, Calvinist, Apostolic, Mennonite, Pentecostal, Adventist, Coptic, Protestant, Orthodox, Quaker, Christadelphian, Methodist, Hutterite, Moravian, Evangelical, Anglican, Unitarian, Baptist, Episcopal, Wesleyan, and on and on. I have no interest whatsoever in the precise differences between them.

With Churchtown and St Michaelĺs-on-Wyre in the parish of Kirkland this is a region that takes its religion seriously. The Nateby church sign says that it is a ôStrict & Particular Baptist Chapelö, whatever that is. The sign also says ôall welcomeö so they probably don't have bouncers at the doors keeping out those who are not particularly strict. Sadly, the sign no longer says ômarriages solemnisedö as it did in 2007. I do hope that our Strict & Particular Baptists are not treating their marriages too frivolously nowadays.


&nbsp104.   From Bampton Grange to the Lake District's Highest Hills
&nbsp102.   Upper Ribblesdale: Drumlins, Three Peaks and a Cave
A list of all Saunterings so far