Autumn has arrived, so we went to see some leaves. The leaves are turning and falling, having had enough of 2020. Havenít we all?

We walked from Milnthorpe, over the River Bela, and across the Deer Park of Dallam Tower. I canít immediately think of another Deer Park in North-West England (at least, not one with deer in it). So we savoured it in case it is the only one. Actually, we saw only two fallow deer (on the walk south) but many sheep. Between them, they keep the fields trimmer than our garden lawn.

From the Deer Park, thereís a view of Dallam Tower, looking remarkably horizontal for a tower. Presumably, there was once a proper tower. The present building is of the early 18th century and was remodelled in 1826 by the Kendal-based architect George Webster (1797-1864). Webster was involved with a great many of the grand halls and churches that were built or re-built in the north-west in the 1820-1850 period, including, for example, Holker Hall, Conishead Priory and Eshton Hall. Beyond Dallam Tower there are views across the Kent estuary to the Lakeland hills.

We walked through Beetham and across fields past the ruins of the 14th century Beetham Hall, where there is now a crematorium, as far as Hale, where we entered the woods that cover the large area of Beetham Fell. Credit where itís due: whoever is responsible for signposting the footpaths through these woods has done an excellent job. Without the signposts it would be difficult to follow woodland paths when there are many leaves on the ground and when walkersí footsteps cannot establish clear paths over the limestone. At one point the path crosses sloping limestone grooved with runnels that we can now confidently identify as rinnenkarren after our expedition on Hutton Roof Crags (98). 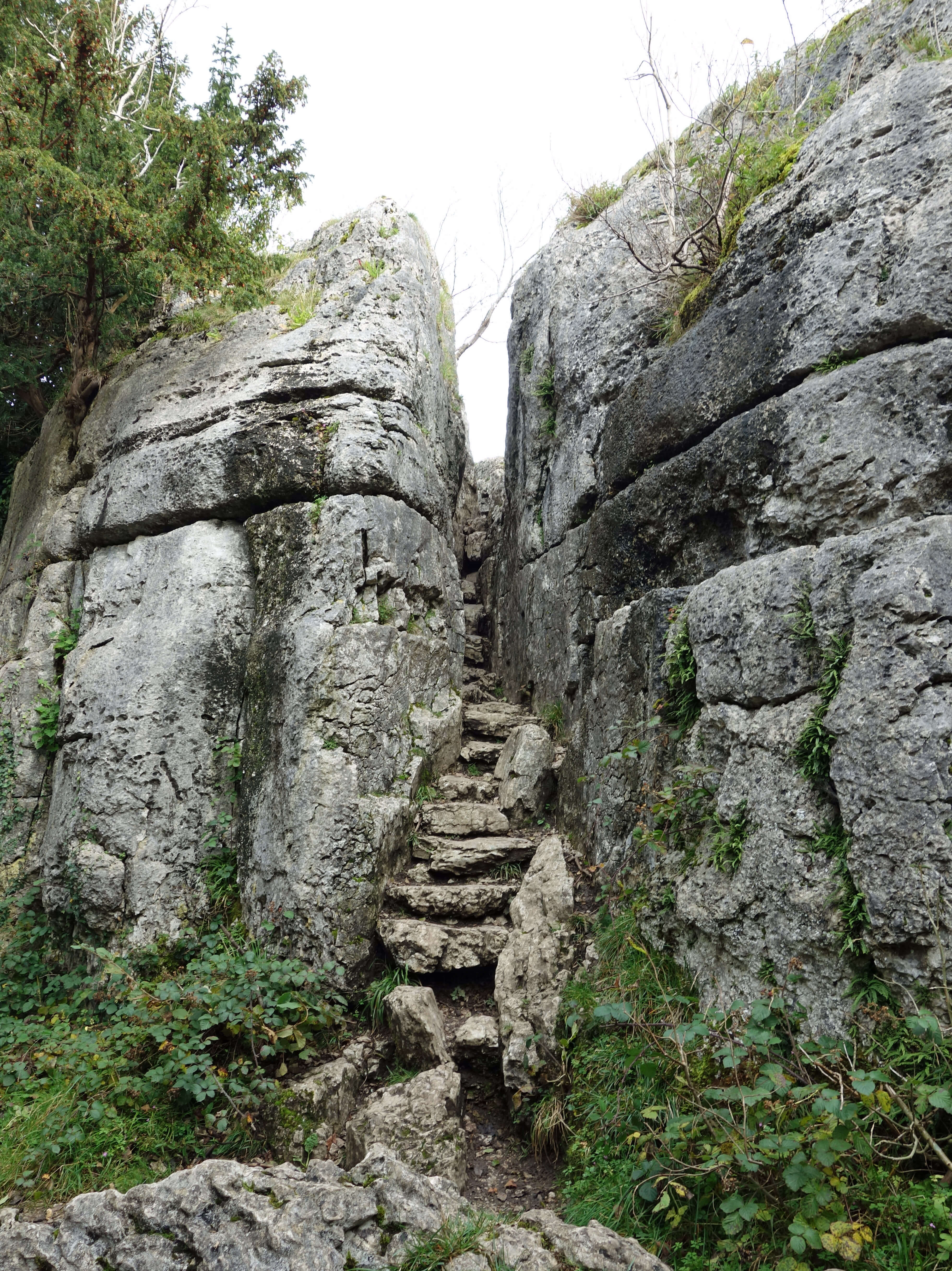 Past Slack Head, we headed for the Fairy Steps, the central feature of these woods. The Fairy Steps form a steep, narrow path through a limestone outcrop. The Visit Cumbria website says that the Steps are on an old corpse road and that coffins were manhandled up this narrow gap, which, it says, ìis hard to believeî. Let me be frank: I donít believe it. The Steps can be avoided by following a more manageable path around to the south. 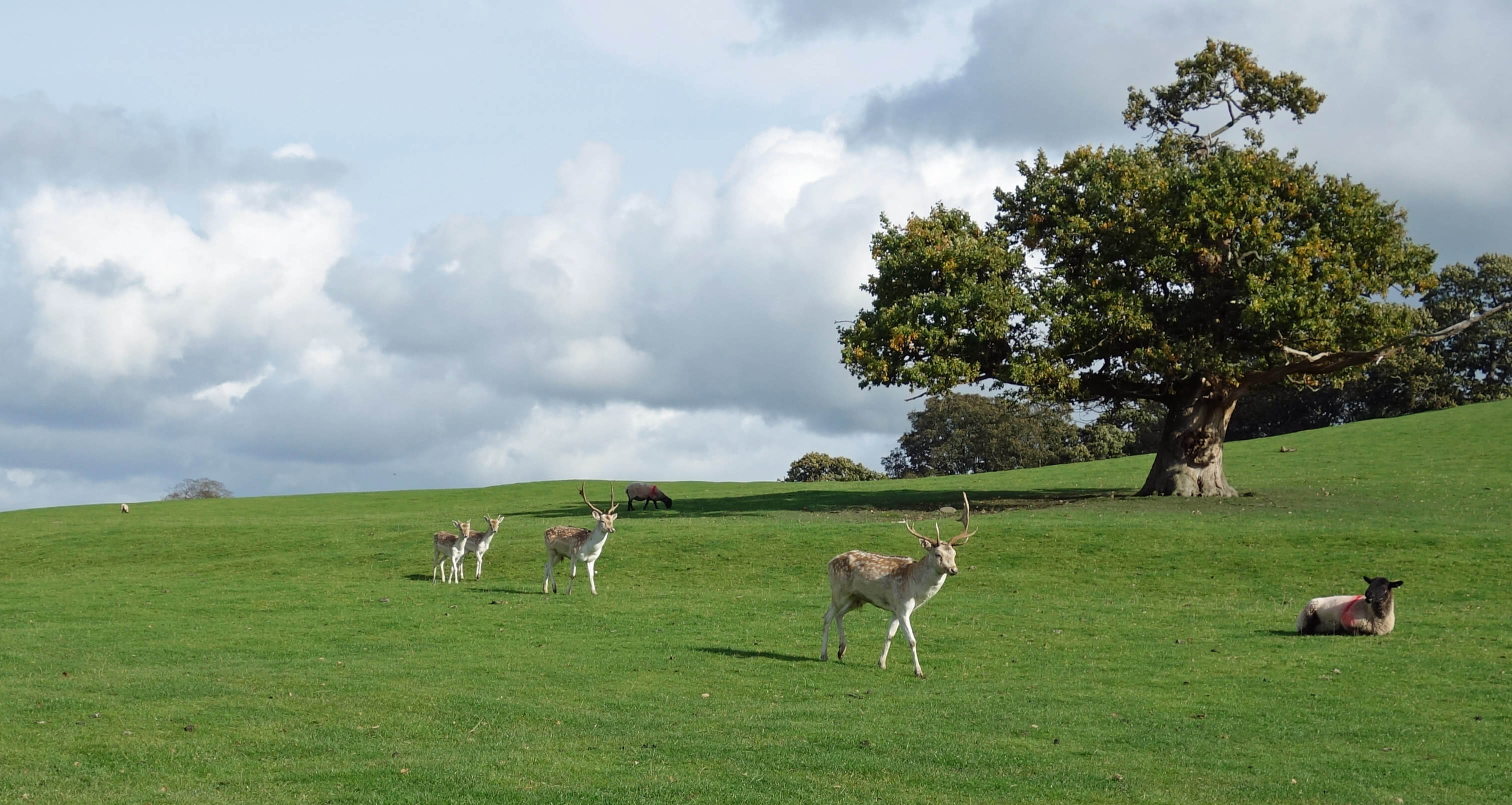 Anyone going to the trouble of bearing a coffin here would have had more respect for the deceased than to try to lug it up this cleft. Anyway, where was this corpse road supposed to run? Corpse roads were to transport the dead from isolated places without burial grounds. The regions west and east of Beetham Fell were hardly isolated. Did they not have their own churches? I am more inclined to believe in the fairies granting me a wish if I can get through the passage without touching the sides.

We walked on through the woods, with the leaves of the trees displaying colours of all shades within the top half of the rainbow (reds, oranges, yellows, greens). At Hazelslack we were unable to gain a clear view of the ruinous pele tower of Hazelslack Tower. So we walked on across fields and through woods, past Haverbrack to re-enter the Dallam Tower Deer Park.

This time we saw a large herd of deer browsing under trees. Further on, as we reached the crest of the last rise, four deer (two with antlers, two without) walked over to thank us for our interest in their deer friends and to wish us a safe journey home. I couldnít help wondering if we were safe with them. I assumed so since people are free to wander among the deer and I have never heard of a walker being attacked by a deer ñ as is not the case for cattle. Recently, there have been two incidents where walkers have been killed by cows. Sorry, what with the mention of the crematorium and the coffins, it seems hard at the moment to put aside thoughts of our mortality, even during a perfectly pleasant, unchallenging walk through fine scenery.


&nbsp106.   Twelve Ponds and a Power Station
&nbsp104.   From Bampton Grange to the Lake District's Highest Hills
A list of all Saunterings so far