Grisedale Tarn is one of the highest, largest and deepest tarns in the Lake District. It sits below Fairfield at 538m, has an area of 0.11 sq km and is 33m deep. It provides a fine objective for a walk, especially if the mountain tops are likely to be windy, cold or in cloud. All three appeared to be the case as I set forth from Grasmere. A chilly wind sent the autumn leaves scuttling about and ahead of me I could see that Fairfield and Seat Sandal, between which I aimed to walk, were in cloud.

Seat Sandal and Fairfield in cloud, from Grasmere

As I headed from Mill Bridge along the ancient track that leads to Patterdale, I passed a house that had a plaque saying “St Bees Head 40 Robin Hood’s Bay 150” embedded in its wall. It kindly tells coast-to-coast walkers that they have far, or very far, still to go. I had less far but it seemed far enough with a real struggle against the wind. It was an excellent path but it had the disadvantage that the best view – of Grasmere, Helm Crag and surrounding hills – was behind, causing many pauses, welcome though they were. The hills were covered in bracken, which was a dead brown except occasionally – very occasionally – when it would become alive as if a spotlight scanned over the hillsides when a fleeting, small gap appeared in the cloud. Eventually I reached Grisedale Hause, the col between Fairfield and Seat Sandal at about 590m, through which the ferocious gale made progress intermittent.

Towards Grasmere, from the path to Grisedale Hause

At last, I looked down upon Grisedale Tarn. It was dark, with clear edges as if drawn on a map. Occasionally, the tops of waves would be whisked off and sent swirling over the tarn. I can see why some people consider the tarns to be the pearls of the Lake District. Almost everybody focusses upon the large lakes and the mountains but in reality they have no more grandeur than those of the Scottish Highlands and elsewhere. It’s just that in the Lake District they are huddled together for our convenience. The tarns, however, are more distinctively Cumbrian. Well, Scotland has its tarns but it doesn’t call them Tarns. Yorkshire has about fifty named Tarns but most aren’t really tarns, in my eyes: they are just upland pools of water. For me, a tarn (for example, Red Tarn) sits, still and dark, nestled between two mountain ridges (Striding Edge and Swirral Edge) below a mountain top (Helvellyn).

Most Lake District walking books describe ways to get to the tops of mountains. They are usually written by men who rock-climb or scramble and who have condescended to explain how ordinary walkers can walk up the mountains to see real men like themselves in action. However, there are books of lowland Lake District walks and also books describing walks to tarns, for example, Drews (1995) and Naldrett (2017). The acclaimed artist William Heaton Cooper produced a volume of paintings of Lake District tarns (Heaton Cooper, 1960). So there are admirers of the tarns. And just as there are people who go peak-bagging, inevitably there are those who go tarn-bagging.

Two questions immediately arise. First, how do you bag a tarn? For example, I stood above Grisedale Tarn – what should I do next to consider it bagged? It is clear how you bag a peak: you stand at the highest point of it. Do you stand by the tarn to bag it? Do you have to walk round the tarn? Do you have to paddle in it? Do you have to swim in it? Or across it? Two men, whose silliness I will not glorify by naming them, swam in all (all, to their satisfaction anyway) 463 tarns, according to a 1959 Guardian Miscellany item by Harry Griffin. I wasn’t bothered about bagging Grisedale Tarn. I turned right to cross the outlet from the tarn that forms Grisedale Beck, which runs to Patterdale, and then returned on the north side of the tarn to reach the col between Seat Sandal and Dollywaggon Pike, so completing three-quarters of a circuit. 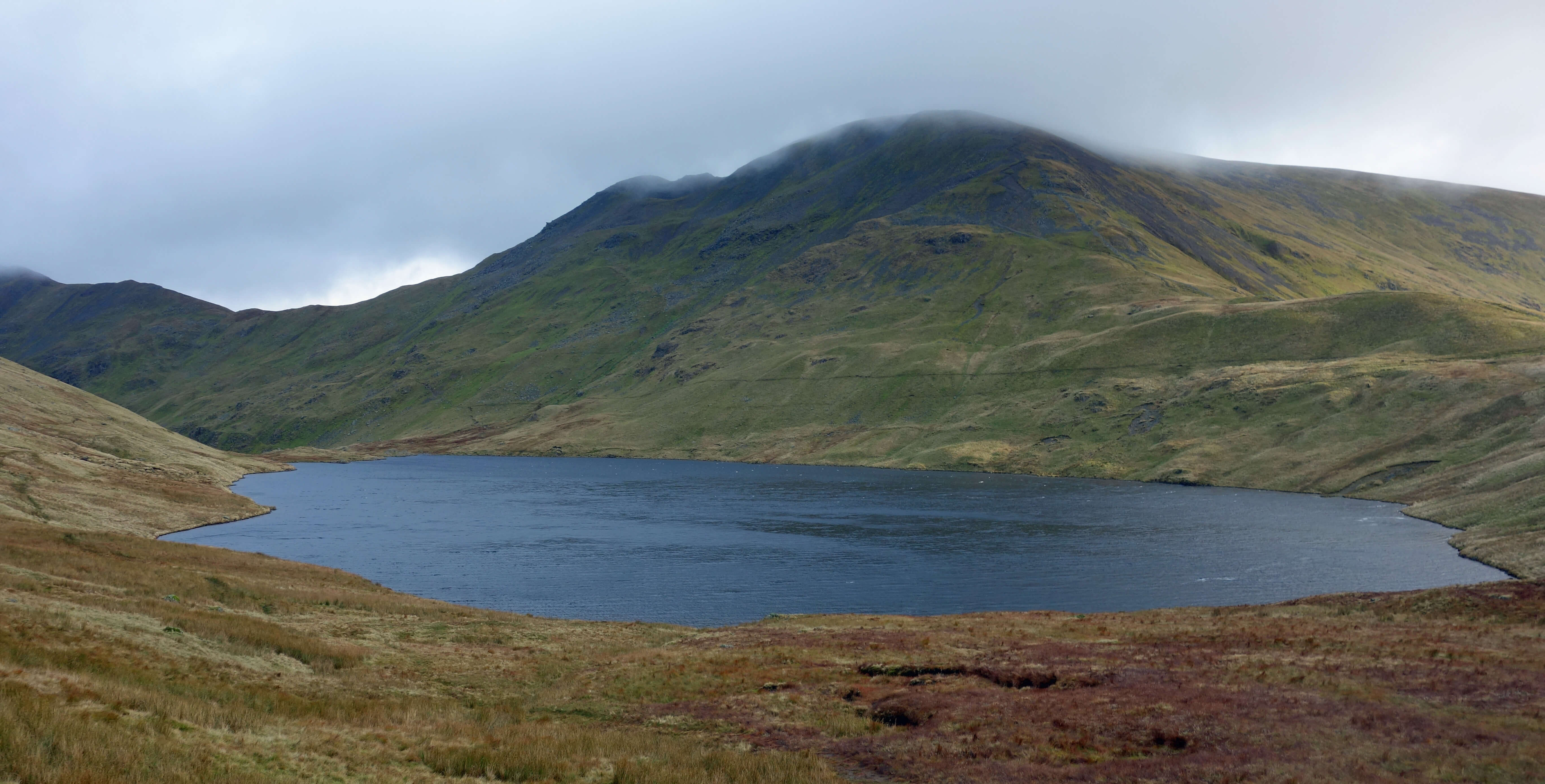 Grisedale Tarn, with Fairfield behind and Grisedale Hause to the right

That ‘463’ above prompts the second question: What exactly is a tarn? My dictionary defines a tarn as “a small mountain lake or pool” but Wikipedia adds the clause “formed in a cirque excavated by a glacier”. How big does a body of water have to be to count as a tarn? Can it be too big? Is Burnmoor Tarn really a tarn? It is bigger than Elter Water, which is counted as one of the sixteen lakes. Does it have to be a ‘permanent’ body of water or do large puddles after heavy rain count? Must a tarn be entirely natural? What about Seathwaite Tarn, which was a natural tarn before being turned into a reservoir by Barrow Corporation in 1907? Does it have to be on or by a mountain? Does it have to have been formed by glacial action? My prototypical tarn, Red Tarn, is clearly formed by glaciers having carved out a hollow and deposited debris to close it off, but then all the hills of northern England were covered by ice and could be said to be, to some degree, formed by glacial action.

Does a tarn need to have a name? Does it need to have a name including Tarn? That would simplify matters! But if so that would exclude many pools that most would consider to be tarns, such as Blea Water below High Street. Does Innominate Tarn count as a name? What about the large pool above Steel Fell that was inexplicably missing from OS maps until it was added in the late 1980s, but still without a name? This tarn (if it is one) is possibly the largest unnamed pool in the Lake District. Those who attempt to answer all these questions come up with a list ranging from about 250 to 2,500 Lake District tarns.

When I set off from Grasmere I had in mind the option of, after visiting Grisedale Tarn, heading west to Dunmail Raise, climbing Steel Fell, continuing to see another tarn (the anonymous one), going on to Calf Crag, and returning to Grasmere. As I left the col (at 574m) I could see the flank of Steel Fell, seemingly far below, with Ullscarf, High Raise and the Langdale Pikes rising beyond. However, as I continued scrambling down on the path by Raise Beck I saw that the traffic on Dunmail Raise was miniscule and realised that I had some considerable way to drop down. By the time that I had reached the road Steel Fell had risen to vertiginous heights above me. I could see no obvious path of ascent. After my slow struggle up to Grisedale Hause, I really didn’t fancy another battle uphill into the wind, so Another Tarn will have to wait for another day.


&nbsp66.   In Search of the Paythorne Salmon
&nbsp64.   Beyond the Leagram Pale
A list of all Saunterings so far