This walk was in homage to our new Poet Laureate, Simon Armitage. His poetry is to me a closed book – about twenty of them, in fact – but I like his prose, especially Walking Home: Travels with a Troubadour on the Pennine Way (Armitage, 2012). Over half of the 268-mile Pennine Way lies within the scope of North-West England (as far as Saunterings goes) and on this outing we began by following in Armitage’s footsteps on day 13 of his trek, his walk south from Hawes.

The role of the Romantic poets in burnishing the image of the Lake District is well-known but what about the Romantic poets and the Yorkshire Dales? The 'Welcome to Yorkshire' website mentions seven Yorkshire-born or Yorkshire-adopted poets: Auden, Caedmon, Hughes, Larkin, MacMillan, Marvell and Plath. Armitage, who was born and lives in Yorkshire but not in the Dales, doesn’t get a mention. None of the seven is of the Romantic era or from the Dales. To the relief of the less poetically inclined, the image of the Yorkshire Dales remains more prosaic.

Hawes from above Gaudy House

Wether Fell from the Pennine Way

We left a busy Sunday Bank Holiday Hawes, with its plague of black bikers, to find peace on the moors, on a perfect late August day, virtually cloudless and with a light breeze. Armitage was not so lucky on his day 13. He had to walk in cloud, a joyless trudge from the sound of it: “without a view, the whole enterprise is pointless, a futile schlep, hours of visual confinement with nothing to see but your own feet, and nothing to do but carry on”. He was not inspired to write a poem about his walk from Hawes, which seems a shame. I’m sure that he could have managed something along the lines of “I wandered lonely in a cloud …”.

My knowledge of poetry is somewhat limited for me to be advising Armitage. I know that if the word ‘over’ is spelt ‘o’er’ then it becomes poetry (“floats on high o’er vales and hills”, that sort of thing). And I see that the best poems leave lots of space on the page. I assume that this is so that you may add comments to explain all the allusions, metaphors and similes (comparing yourself to a cloud or a daffodil, that sort of thing). I said similes, not smiles. There are few smiles in poetry. If you buy a book of humorous poetry then hold it tight so that it doesn’t blow away in the breeze. Judging from his prose, I thought that Armitage’s poetry would be jollier, so I read one of his apparently acclaimed poems I Say I Say I Say, which was surely the beginning of a joke. It seems to be about slashing wrists in the bath.

Once we had left the outskirts of Hawes and Gayle we were alone on Gaudy Lane and up the Pennine Way. We surmised that Pennine Way walkers leaving Hawes heading south would have left before us and Pennine Way walkers heading north to Hawes wouldn’t have reached this far yet. This fitted the fact that the higher we walked the more walkers we met from the other direction, including a couple from Tasmania. The lengths people go to in order to walk on our moors! 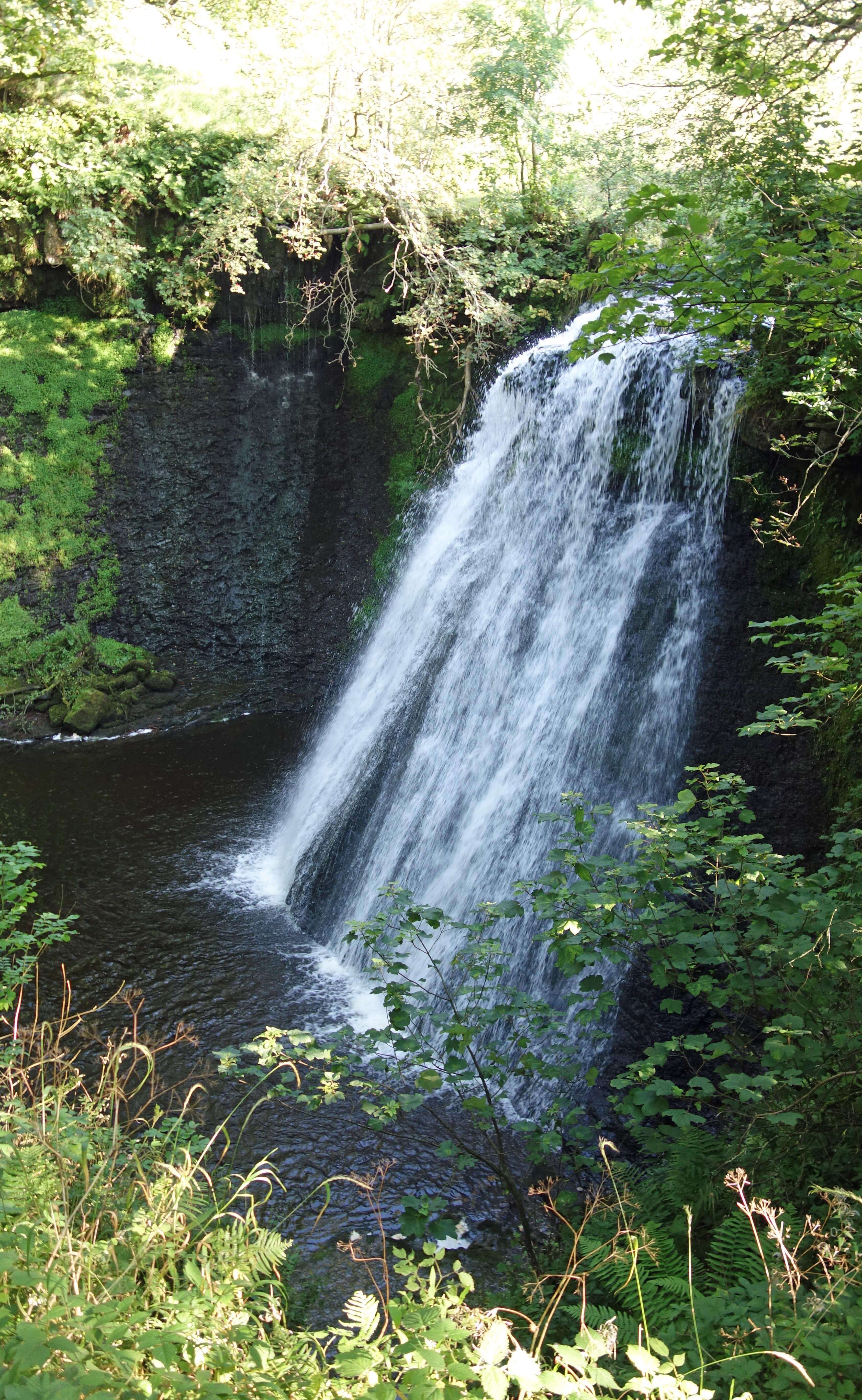 We paused for a snack on a perch with a fine view into the hidden valley of Snaizeholme, with Widdale Fell beyond and Wild Boar Fell more beyond. Approaching Dodd Fell, we left Armitage to his gloomy yomp to Horton-in-Ribblesdale and walked across the moor to the top of the fell. It seemed a good idea at the time but I’ve now read the opinion of Sellers (1984) that “it is hardly worth the very considerable effort as there’s much rough ground and no path”. Perhaps she was not entertained at the top as we were by golden plovers, which made all our effort worthwhile. The alarm call of the golden plover is a single plaintive whistle but to us on this desolate hill it sounded more welcoming than alarming. The view from Dodd Fell (668m) is not ideal. There are higher tops to be seen in all directions but unfortunately the tops are all that can be seen. The broad plateau of Dodd Fell cuts off all their bases.

From Dodd Fell we dropped down and around the head of Sleddale – with more rough, pathless walking – to eventually reach what’s called the Hawes–Kettlewell road. This remote hill road is rather challenging for a Sunday jaunt but a fair number of drivers – and bikers – seemed keen to take it on, sadly. We walked down the road, below Wether Fell, to have a look at the graceful Aysgill Force and then on for a drink in Hawes before awaiting the summer Sunday 830 bus that runs between Preston and Richmond.

Armitage did reach Horton-in-Ribblesdale but did not give a poetry reading there – he was whisked off to Grasmere for some reason. He had resolved to walk the Pennine Way from end to end on consecutive days trying to earn enough money to pay his way by reading his poems at his evening stops. This is not a challenge that I could take on, as I have no poems, or that I would take on, as I’d rather not feel compelled to walk, come rain or sleet, to Slaggyford – I’m not making this up: Slaggyford in Northumbria was on his itinerary of poetical stops – by 19.30 on Tuesday to read poems to the locals. Still, Armitage did extract Ł247 from the people of Hawes, which shows the quality of his poems or the legendary generosity of Yorkshire folk.