Driving south through the Trough of Bowland recently I noticed, just past the Smelt Mill Cottages, a black ‘Duchy of Lancaster’ sign. Continuing through Dunsop Bridge and Slaidburn and back over Bowland to Bentham, I did not notice a sign to say that I was leaving Duchy of Lancaster land. So, a question arises: where exactly does Duchy-land begin and end in Bowland?

I looked for an answer on-line. There are maps of almost everywhere – but not, it seems, of Duchy-land. I did, however, discover a few other things about the Duchy. Before, I had been aware of some odd facts that add to the gaiety of life – that the Queen is the Duke of Lancaster and that a so-called Chancellor of the Duchy of Lancaster is a member of the British Cabinet, for no obvious purpose. We tend to assume (well, I do, I suppose) that anything that’s been around for a long time is part of the natural order of things. The Duchy of Lancaster has been around since the 14th century. But why? I live near Lancaster and feel I ought to know. As far as I’m aware, there are only two Duchies in England: Lancaster and Cornwall. Why is that? Why don’t all the other Dukes (and we have plenty of those) have Duchies? Or if they do why do they keep so quiet about them? Who’s heard of a Duchy of York?

I found that the Duchy of Lancaster owns Lancaster Castle and five rural estates in Lancashire, the largest of which (2,447 hectares or 9.4 square miles) is the Whitewell Estate, the one that I had driven into. The Duchy assets have a value of £534m and bring an income of over Ł20m a year, mainly from those rural estates. How is that possible? The Whitewell region is mainly farmland and farmers always give me the impression that they struggle to make ends meet. How exactly can regions like the Whitewell Estate contribute millions of pounds to the Duchy? The EU Common Agricultural Policy grants over Ł300,000 a year to the Duchy of Lancaster. Large though that amount is, it is still only a fraction of the total income. The EU grant is, of course, from tax-payers’ money. Perhaps we also contribute somehow to the rest of the Duchy’s Ł20m a year.

I wrote to the Duchy asking if they could kindly send me a map of the Whitewell Estate, to aid me in my researches. Alas, it was “not the Duchy’s policy to provide members of the public with estate plans”. There’s a surprise. But why not? It’s not as if the Duke is ever resident there. Is it so unreasonable to want to know if I was walking on land owned by my local Duke? The Duchy’s letter referred me to the Land Registry. I grappled with its website but gave up. It’s one of those websites that has to exist but is designed to be unusable. People who own a lot of land don’t want people who don’t knowing how much they do.

So I set out in the hope of determining the boundaries of the Whitewell Estate myself. I parked just beyond the Duchy sign, by the bridge to Hareden Farm, and even from the car I was struck by the morning clarity of the autumn colours. I headed to Dunsop Bridge where I found black Duchy signs on the Post Office, Mill House, Bridge Cottage, and so on. I deduce that the Duchy owns Dunsop Bridge. I saw nobody I could ask about Duchy-land, so I walked south alongside the River Hodder enjoying an absurdly warm day for October. I battled up Kitcham Hill, which seems to have no use for man or beast. If the Duke earns any income from this land then she’s a better man than me. The hill is not very high (283 metres) but it has an intriguing nobble on top and a stand of Scots pine that makes me wonder if they have been planted here (and if so why) or if they are remnants of woodland that used to be more widespread.

I called in at The Inn at Whitewell. This has a black Duchy sign on its outside wall and photos of the Queen and Prince Charles on its inside walls, so I would surely get my answers here. However, I was discombobulated by the glances I received. The place was almost full, and it was midweek and hardly time for lunch yet. Or luncheon, as the menu says. The menu, incidentally, gave me an inkling of where much of the Ł20m comes from. Everybody except me was dressed to the eights (I am giving you a precise measure on the sartorial scale and avoiding exaggeration). The average age of the diners was 103. I was astonished that they were all inside, some huddled by a fire, when it was a glorious day outside. Perhaps there was a touch of autumn dew on the outside seats.

I sidled back out but on the way slipped into the wine shop (an inn with a wine shop!). Knowing nothing about wine, I could not inveigle myself into the two lady assistants’ attention, so I came right out and asked them about the Duchy. They knew less about Duchy-land than me. The only precise information offered was that Browsholme Hall (which is a little south of where I had walked) is part of the Duchy estate. I have since checked and believe that I was misinformed. I escaped over the stepping stones, which was fun. 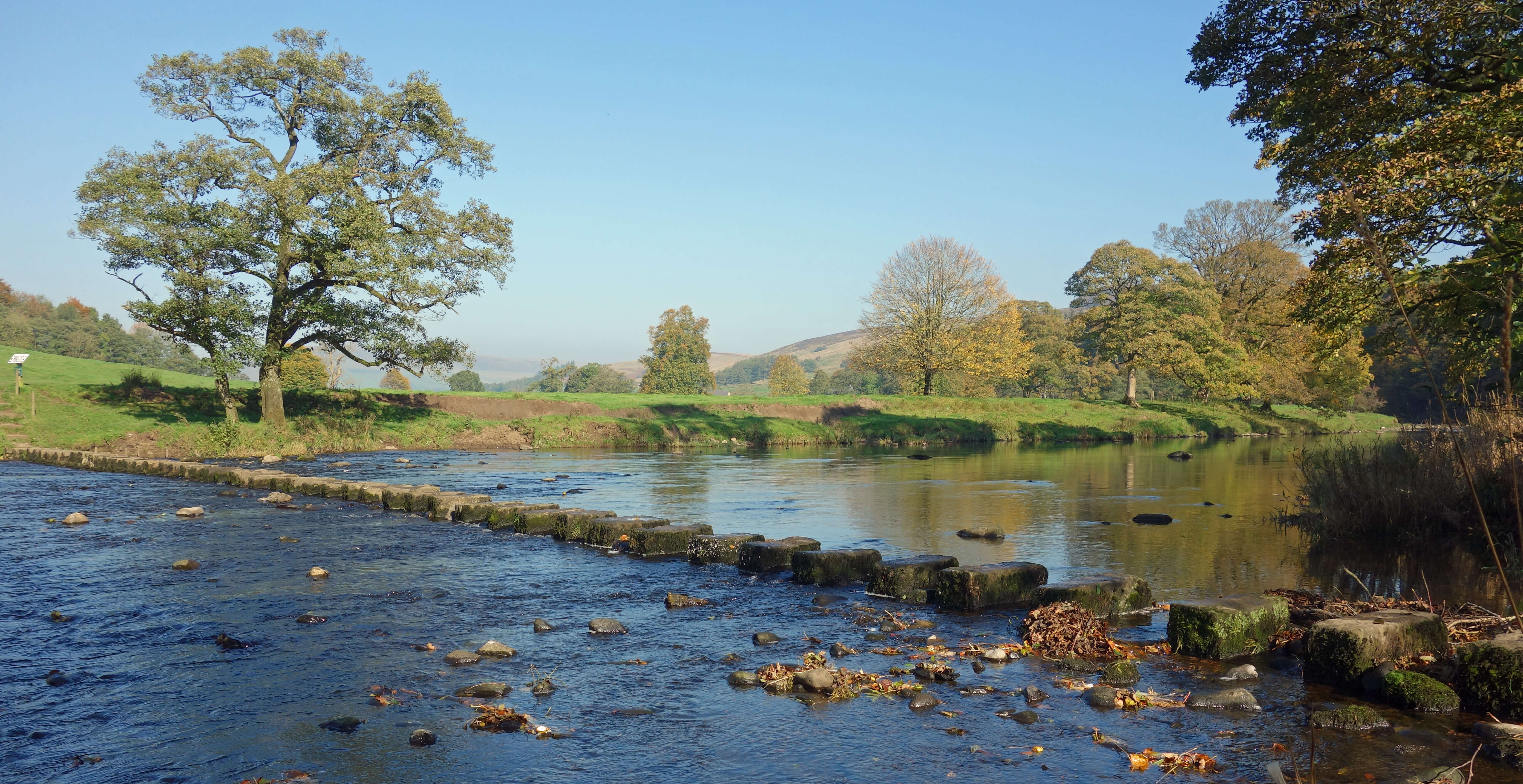 And then continued a fine walk among the farmland and woodland below Fair Oak Fell and Whitmore Fell. The sun still shone and there was now almost a summer haze diluting the autumn colours. The path provided fine views, including from the partially felled Whitemore plantation, across the green Hodder valley but Pendle beyond was only dimly discernible. On the farmland between Dunsop Bridge, Whitewell and Hareden I did not see a single Duchy sign, although the farms must surely be within Duchy-land.

The Hodder valley from west of Whitewell, looking towards Kitcham Hill

On the way back, I couldn’t help mulling over that Ł20m. The Duchy’s financial report says that the Duke “voluntarily pays tax on the income which she receives from the Duchy of Lancaster”. Voluntarily! As though we should be grateful for that. I should hope that tax is paid on Ł20m income that is hardly earned. What about other estates? Say, the Duke of Westminster’s Abbeystead Estate, which I also drove through and which is a larger chunk of Bowland than Duchy-land. Does this Duke somehow ‘earn’ millions from his Bowland estate? How much tax does he pay on it, voluntarily or not? We really have little idea how the other half-a-percent live, do we?


&nbsp31.   Pink Stones on the Orton Fells
&nbsp29.   The Quiet End of the Ribble Way
A list of all Saunterings so far