129. &nbspFrom the Delights of Downham to the Heights of Pendle 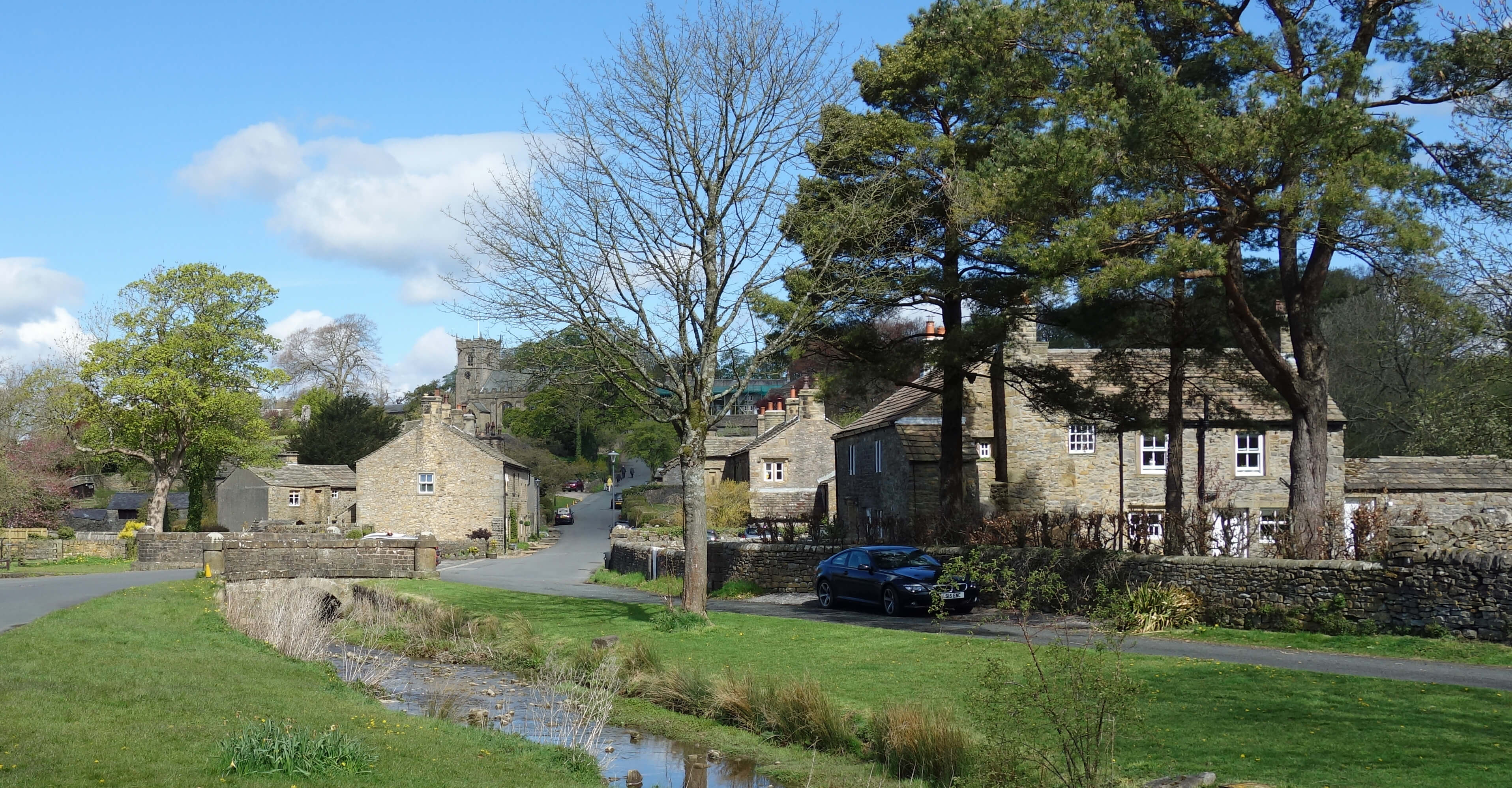 We set off walking from the village of Downham, which is a few miles north-east of Clitheroe. The Downham website states, with false modesty, that ôIt is often hailed as the most beautiful village in Lancashireö. However, we had a hill to walk up first. The delights of Downham could wait until we returned, if we had any time and energy left.

We walked east on a pleasant path by Downham Beck, passing Clay House, which is, I read, ôa good example of the revived vernacular styleö of the region. Crossing Pendle Road, we then followed a permissive path across Downham Moor all the way to the top of Pendle. I appreciate the permissive path across the first field but beyond that it is all open access land. We donÆt need permission to use the path there, so why isnÆt it just marked on the map as a path? Anyway, it was a good path, easy to follow and obviously well-used. It provided excellent views across the Ribble valley to the southern Bowland hills and to the distant Dales hills, which we were surprised to see covered in fresh May snow.

The last time I came here (20) they were repairing the path along the top. The result is so fittingly unobtrusive that I can excuse the embellishment of the trig point, now surrounded by circles of stones. We sat on the eastern edge with our sandwiches, with swallows swooping along the hillside, and with the view shown right.

Pendle now has such a myriad of well-worn paths that we felt the need to escape for some moorland yomping. So we set off west, where we found that some of the boggy bits now have straw bales to ensure that they become boggier and thus retain their peat. We found a step-stile in Oaken Clough and continued by the wall to reach another so-called permissive path. We ignored it and instead walked more on the western edge in order to better enjoy the view of Bowland and the Dales (where the snow had now all but melted away). We could also see below us the route back to Downham and dropped steeply down the slopes to pick up the path near Burst Clough. On the path past Worsaw Hill there were fine views back to Pendle. 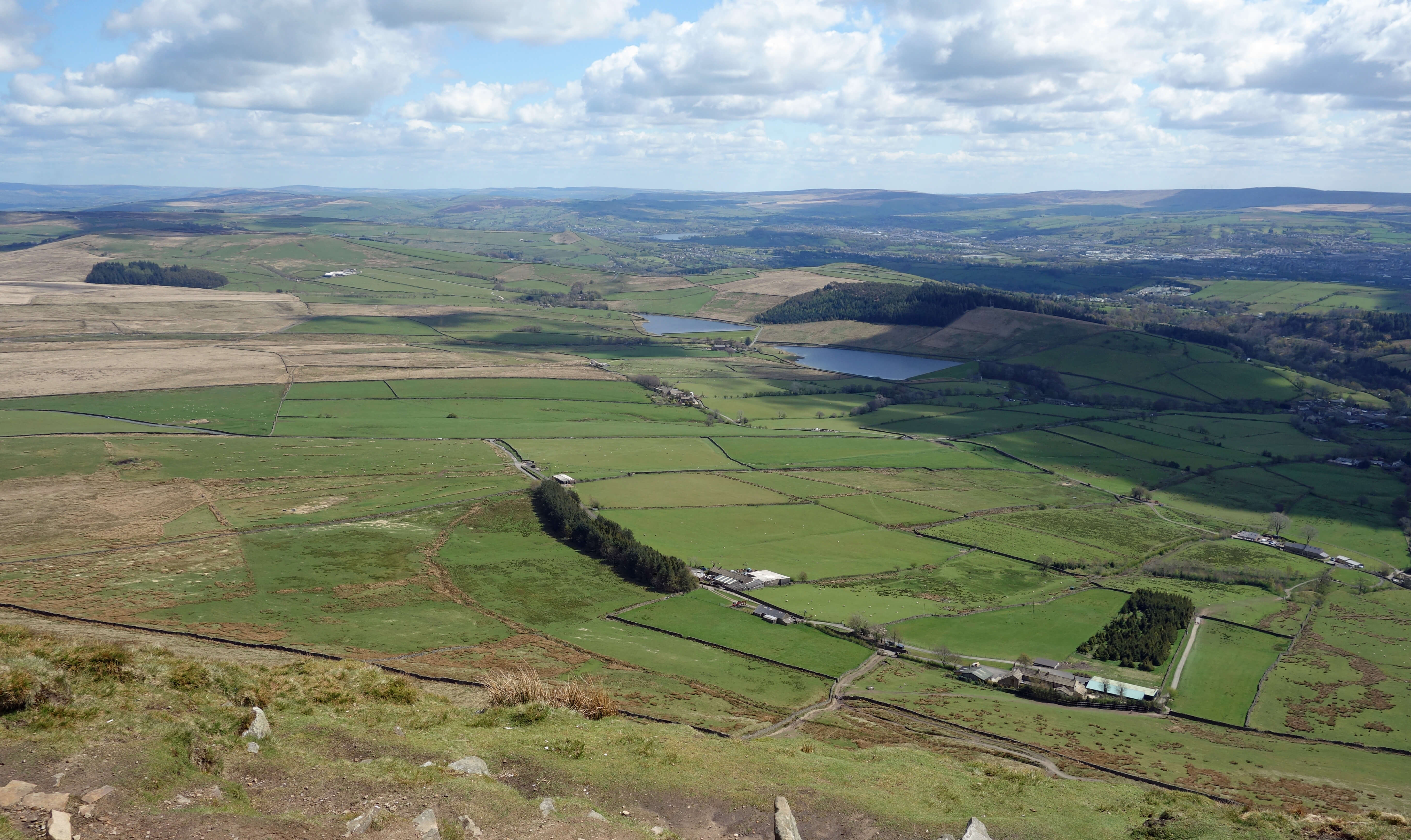 The view from the Pendle lunch spot 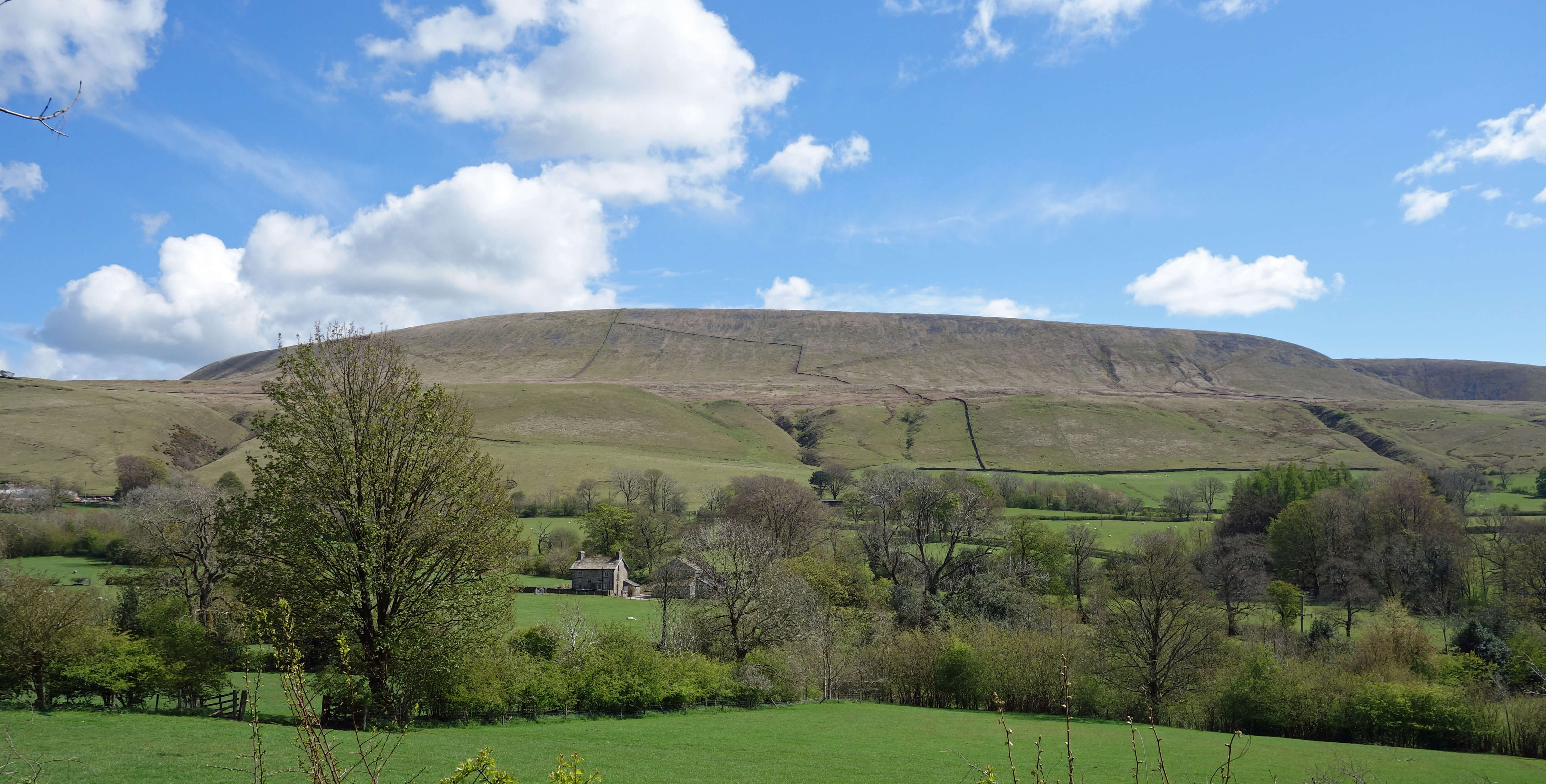 The view of Pendle, from near Downham

Back in Downham, we strolled around its lanes, up to the pub (re-opening in June) and the church. A visitor who had read nothing about Downham and who had been deposited in its Main Street would probably find the surroundings calmly reassuring but oddly unsettling. It would be like finding oneself in a village from the pages of an Enid Blyton or Topsy and Tim book. Downham seems more of a museum or a model than a natural village of 2021.

A Lancashire Life article explains why Downham is as it is. The region has been owned and managed for centuries by the Assheton family of Downham Hall. Their directions ensure that, as the article says, ôDownham hasnÆt changed since the 1950sö. There are no television aerials, satellite dishes, overhead wires, or road markings. There was no sign to the car-park either, but we had skilfully found it anyway. Surely it is better to help visitors find where to park than leave them to clutter the lanes, where there are, of course, no yellow lines.

The present manager of the estate, the Hon. Ralph Christopher Assheton, 3rd Baron Clitheroe in waiting, is quoted as saying ôWe agreed to a bus timetable next to the telephone box, but thereÆs no sign for the bus stop. We donÆt need it.ö What about those who have commendably taken the bus from Preston for a dayÆs visit to Downham? No doubt the Hon. Ralph doesnÆt need a bus stop sign û or even a bus.

The directives of the Assheton family are no concern of mine but I think IÆm allowed to comment on the principle of this arrangement. The Hon. Ralph may be the epitome of an English country gentleman and may have the Wisdom of Solomon but how can Downham residents, while no doubt grateful that the place is kept so spick and that someone pays for work, such as the planting of trees, in the local environment, accept that one man has the right to determine what is allowed in their village? How can one man assume that he has the God-given (or parent-given) right to make such decisions on their behalf? Are there other villages in England where such feudalism still exists?

Yes, there are. The Who owns England? website lists a number of them: Albury (Duke of Northumberland); Eridge (Marquess of Abergavenny); Firle (Viscount Gage); Glynde (Viscount Hampden); Yattendon (Baron Iliffe). At least the Asshetons donÆt insist that all the houses, none of which is privately owned, are in the family colours. Albury, for example, is all green. Unless, perhaps, the Assheton colour is white. Everything is stone grey or white, apart from the red telephone box. We didnÆt inspect it to determine whether it was a stage prop or functional. If the latter, I expect that it requires the use of shillings, tanners, threepenny bits and old pennies.

The 1950s mirage is maintained not just by the absence of modern appendages to houses but by the absence of modern houses. As far as I could tell, there are no post-1950 houses in Downham. My own village has grown from about 20 houses in 1950 to about 200 now. And it has, like most villages, recently had to develop a æneighbourhood planÆ detailing, amongst other things, where more new houses may be built. Is Downham exempt from such requirements? We noticed that Downham doesnÆt opt out of the refuse collection services. Do Downham residents pay Council Tax, although they may pick and choose what services they make use of? At all events, it seems unfair to acclaim Downham as the most beautiful village in Lancashire when it is playing by its own special rules that make it hardly a village.

The present manager is the son of Ralph John Assheton, 2nd Baron Clitheroe, who is the son of Ralph Assheton, 1st Baron Clitheroe, who was the son of Sir Ralph Cockayne Assheton, 1st Baronet. There are some women in the family tree too. All four Ralphs went to Eton College. I see from his Wikipedia page that the 2nd Baron was Deputy Chief Executive of the Rio Tinto Group, a company well-known to environmentalists, and that in 1955 he became a Liveryman for the Worshipful Company of Skinners. What an achievement!

If having old Etonians assuming a right to determine whether we may have a bus stop sign and much else besides and having a populace happy to accept that they do indeed have that right results in such a charming, harmonious, local society then perhaps we should try it at a national level. Oh.