Walking to the top of Calf Top is not as straightforward as it may seem. Calf Top (610 metres) is the highest point of Middleton Fell, the sprawling upland that lies in the triangle between Barbon, Dent and Sedbergh. The recent boundary changes have brought the fell within the Yorkshire Dales National Park although its geology is not typical of the Dales. The Dent Fault runs through Barbondale and across Dentdale and separates the Silurian slate of Middleton Fell from the more characteristic limestone and millstone grit of the Dales. Middleton Fell is more akin to the Howgills but the latterís southern half has always been part of the Yorkshire Dales, so why not Middleton Fell?

Until recently, then, Middleton Fell did not feature in Yorkshire Dales literature. The fell does not contain any really note-worthy features, the names of the fell and the tops thereon (Castle Knott, Calf Top, Combe Top and Brown Knott) are not particularly memorable, and the only public footpath marked doesnít form a reasonable circular walk. Consequently, Middleton Fell attracted few walkers. This may have changed recently but probably not by much. The main appeal of Middleton Fell lies not in the fell itself but in the evolving panorama of views of the surrounding hills gained from a walk along the south-eastern and north-eastern rim.

We walked past the dormant Churchmouse, Barbon Inn and St Bartholomewís and across the parkland west of Barbon Manor to begin the climb up past Eskholme Pike. The Lakeland skyline to the west soon came into view and every step revealed a little more of it. To the east the familiar outlines of Pendle and Ingleborough became visible. Beyond Castle Knott (538 metres) we reached the snow that had fallen yesterday. This snow had been very choosy about where it fell. The tops of Crag Hill and Great Coum across Barbondale were quite white, as was the Wardís Stone ridge of Bowland, but all the surrounding hills, many of them of greater height, appeared to be snow-free. We could see no whiteness on the Lake District hills, although admittedly it was a distant view, nor on the Howgills, Wild Boar Fell and the north Pennines. But, it being a clear, blue-skied day, we could see them all, which was the main thing. On this our first walk up a non-local hill for some months we wanted to see many of our old friends again, in the hope that we can resume walking upon them.

The Calf Top trig point, looking north towards the Howgills and Sedbergh, with Wild Boar Fell directly behind the trig point.

We paused at the Calf Top trig point. In 2016 Calf Top had caused a spasm of excitement among the hill-bagging community. The Ordnance Survey decided that its height was not 609.58 metres, as previously stated, but 609.61 metres. The significance of that extra 0.03 metres may escape you, until I give the heights in old money: 1999.93 feet and 2000.03 feet. Yes, Calf Top had magically leapt over the 2000 feet threshold, which meant that it had become, in some peopleís eyes, a bona-fide mountain.

However, anyone who stands by the trig point and thinks that that is enough to tick off the mountain of Calf Top is sadly mistaken. The real top, marked by a few stones, is 0.15 metres higher than the trig point and about 12 metres south-east of it (weíll have to take the surveyorís word for this). Excellent viewpoints though they are, neither affords the best view. For this it is necessary to walk a little further east for a birdís-eye view into Barbondale. Across the valley are the slopes of Crag Hill, wrinkled by the various gills running down it and pock-marked by shake-holes indicating the line of the Dent Fault. Thereís also a sight of a mysterious dark brown region, south of Short Gill, which seems to have been left for heather and shrubs. Is this what all these slopes would look like without the sheep? 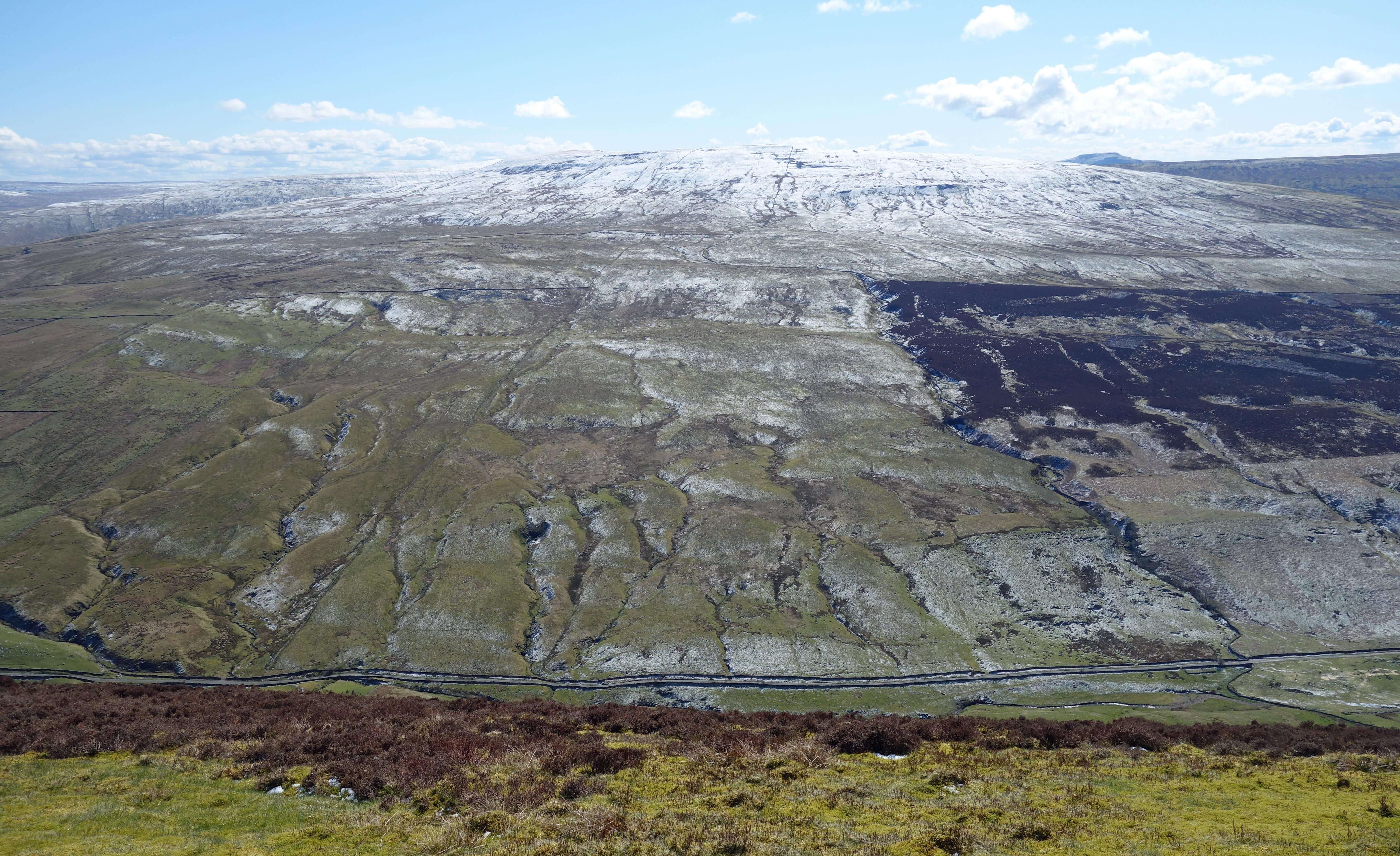 The view eastwards from just east of the Calf Top trig point. The Barbondale Road is directly below, with Crag Hill opposite and Ingleborough to the right. 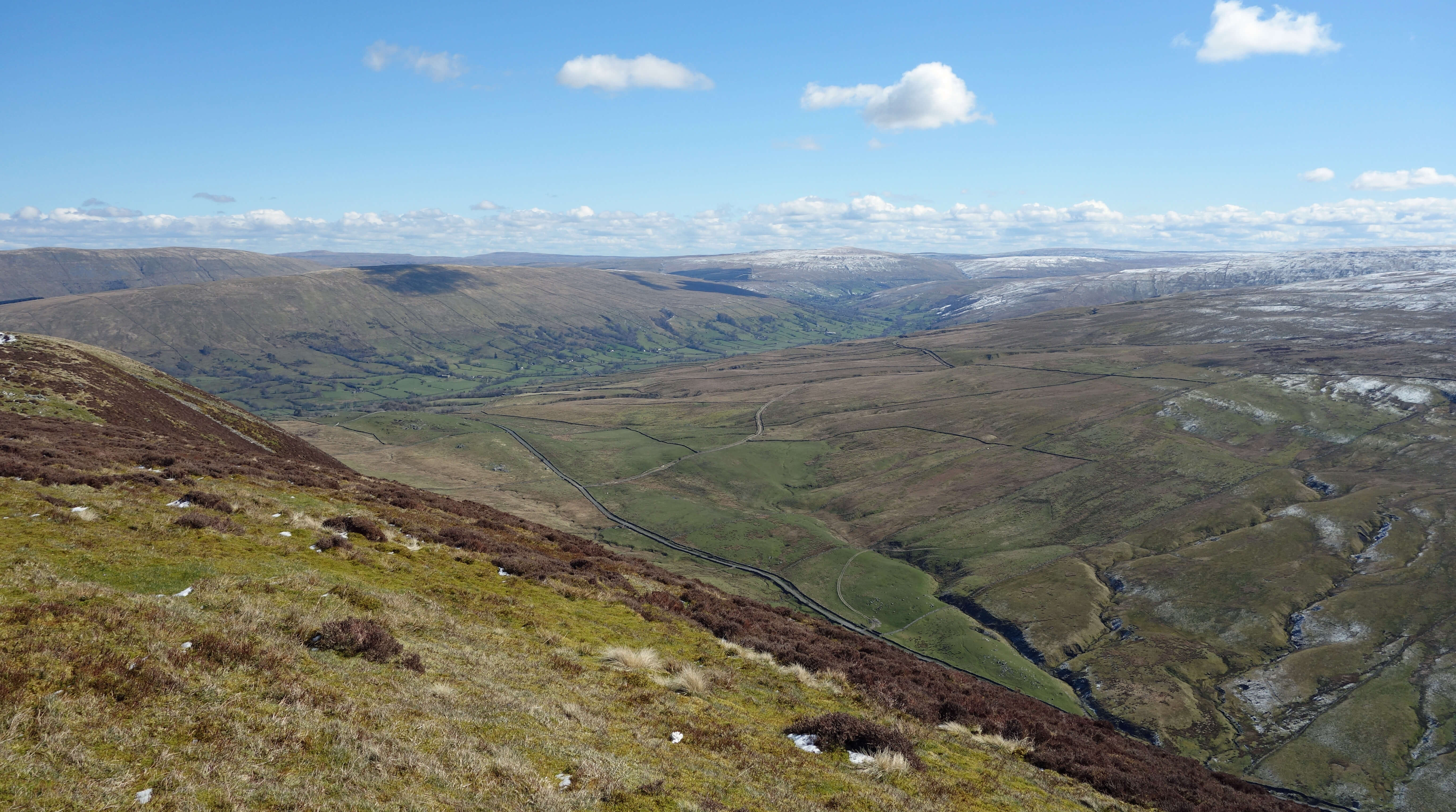 The view north-east from just east of the Calf Top trig point, showing the Barbondale Road leading to Dentdale, with Great Knoutberry Hill at the head of Dentdale.

The path to Calf Top is fairly well trodden but we saw no walkers, only a group of four runners, one of whom happens to play in the same orchestra as Ruth (when it is able to play, as it may be soon). From the trig point we headed west into the hinterland of Middleton Fell, where we expected to see nobody. A clear path ran past a small tarn and a fine cairn, none of which is marked on the OS map. Nothing much is marked anywhere except some grouse butts a little to the north. We did disturb a couple of grouse but I doubt that there are sufficient to satisfy grouse-shooters. Really, though, it wasnít what was on the ground that held our attention ñ it was the view across the green Lune valley to the Lake District, with the Howgills to the north and Morecambe Bay to the south. 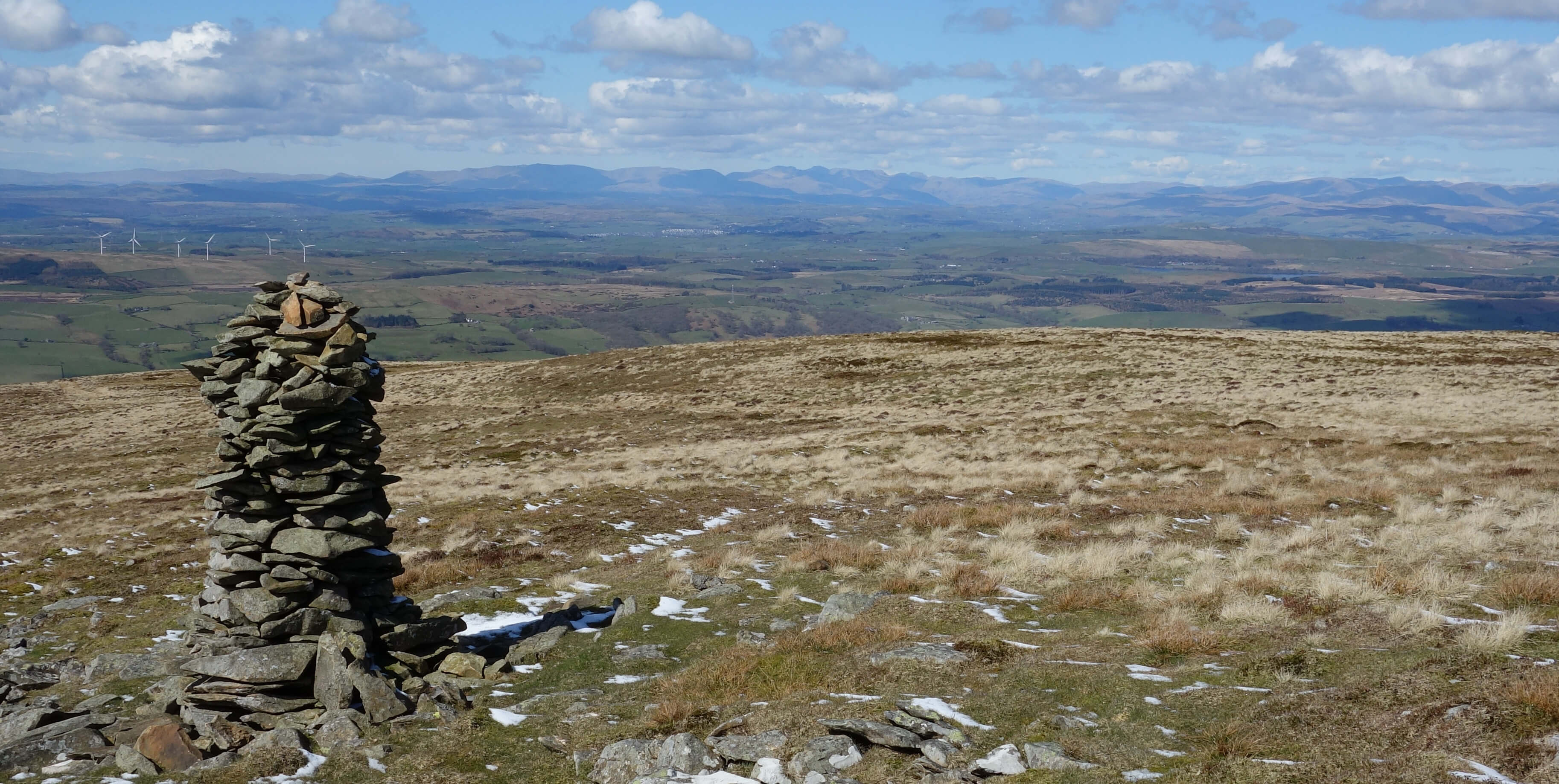 The unnamed cairn on the unnamed slope west of Calf Top, looking towards the Lake District.

The view back from beside Millhouse Gill towards Northdale Gill and Southdale Gill. We had dropped down from Calf Top on the slope to the left.

We dropped down to ford Northdale Gill and then Southdale Gill, thinking that it would be easier to cross the two tributaries separately than to tackle their combined waters in Millhouse Gill. The two tributary gills are named on old OS maps but not the present one. The OS seems determined to show that Middleton Fell is empty. We then picked up pleasant tracks to take us back to Barbon. Why is this circular walk from Barbon not better known? I suppose the map doesnít encourage it ñ and I've not seen it described in any guide-book ñ and perhaps the bracken makes it difficult at other times of the year ñ and perhaps it cannot be guaranteed that the becks will be fordable ñ but for us it was the ideal outing in the circumstances. Back in the village the Barbon Inn had, on the first day for months that it was allowed to do so, opened its garden for refreshments, but we desisted. We are taking one step at a time ñ and our first mountain, if it is a mountain, since September was a big step for us.