155. &nbspTwo Sides of Bassenthwaite Lake and One of Derwent Water

I always used to feel sorry for Bassenthwaite Lake. Perched at the northern edge of the Lake District, it is virtually ignored by visitors. Keswick turns its back on it, preferring (understandably) to focus southward, on Derwent Water, Borrowdale and the surrounding mountains. Poor Bassenthwaite Lake is the only one of the Lake District lakes to be called a Lake and not allowed to be a Mere or Water. Why is it named after a village a couple of miles off its northern end? The ëssí and ëthí hardly trip off the tongue. The lake really needs a snappier name in keeping with the Lake District. I have a suggestion ñ later.

We arrived at the eastern side of Bassenthwaite Lake, on the first day of a two-night stay, to find ourselves in drizzle and with the clouds low on the hills. We didnít blame the Lake District ñ we had left home in drizzle, with the clouds low on our hills. We parked at the Sawmill, below Dodd Fell, and walked to St Begaís Church, a pre-Norman church finely situated some 100 metres from the shores of Bassenthwaite Lake, with the dark slopes of Ullock Pike towering to the east. It is a sister church to the one at St Bees, also named after St Bega, who I was surprised to discover was a woman, a 7th century Irish princess [*]. I donít think much about Saints but my ingrained sexism had led me to assume that men had a monopoly of Saintliness. We strolled the short distance to the lakeís edge (although Iím not sure weíre strictly allowed to) for the view along Bassenthwaite Lake (shown above), with the hills still shrouded in cloud.

It was no longer raining so back at the Sawmill we continued to walk in Dodd Wood. We didnít have time for an ascent of Dodd Fell, which was probably still in cloud, and settled for a loop past the two osprey viewpoints. There was no activity at either viewpoint. I understand that a mating pair has recently returned to the area but is inconsiderately nesting on private land, as last year. In any case, I sense that the excitement of the osprey project has waned since they returned to nest in the area in 2001 for the first time for 150 years. Ospreys now nest at several locations in England, including in Rutland and around Kielder Water.

On the second day we took a 77 bus which completes a circuit over Whinlatter Pass and Honister Pass, passing Buttermere. This we would thoroughly recommend as it is a much more relaxing journey than driving on these narrow and steep lanes ñ although many car-drivers do not seem to agree, as all parking spaces around Buttermere and Crummock Water were occupied, on a cloudy, midweek day. It is possible to hop off the bus, for a walk or a meal or whatever, and then to hop back on another one. Or to get off the bus and walk back to Keswick, which is what we did, from Grange along the Cumbria Way.

Derwent Water, with Walla Crag opposite

Left: Skiddaw from the boathouse at Nichol End. 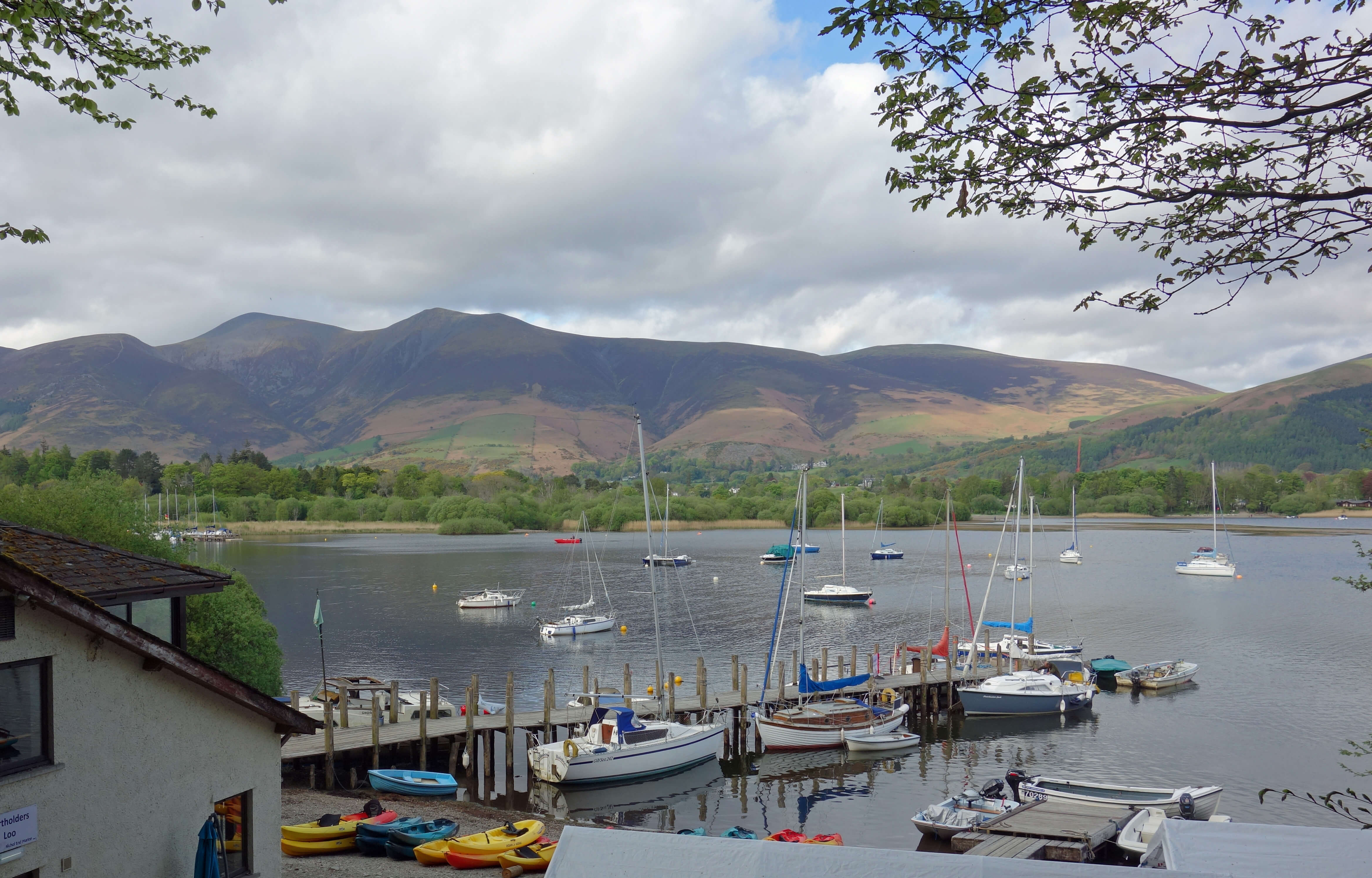 Here the Cumbria Way runs along the western edge of Derwent Water, flirting with various bays (Myrtle Bay, Abbot's Bay, Brandelhow Bay, Withesike Bay, and so on) along the way, providing views across the lake to Walla Crag and Skiddaw, again in cloud. At Brandelhow Park we passed through the first piece of land in the Lake District bought (in 1902) by the National Trust.

The Cumbria Way does not seem to have caught the imagination of Lake District walkers. I have not come across any writing about walking the Cumbria Way, whereas there are books galore on most other long-distance paths. The Way was devised in the 1970s, shortly after Cumbria itself was devised, and runs for 70 miles between Ulverston and Carlisle, passing, but not climbing, many of the classic Lakeland fells. Here the Cumbria Way signs seem to be being superseded by ones for the Derwentwater Walk, the two paths sharing footsteps on the western side of the lake, I assume. The Derwentwater Walk is a 10-mile loop around the lake.

We paused at Lingholm, a burgeoning tourist attraction that had not previously attracted my attention. It vigorously milks its association with a woman who holidayed here in the years around 1900. This Beatrix Potter suffered terribly from hallucinations, about rabbits rowing to islands, cats being rolled into puddings, and such like. Anyone seeking information about Lingholm ñ such as who built it, who owns it ñ will have to wade through reams of stuff about Beatrix Potter. The house was built in 1875 for Lt-Col James Fenton Greenall, of the Greenall brewing family. It seems too grand a mansion for a mere Lt-Col: I suspect the brewing had more to do with it. I have read that Lingholm is now owned by Lord Rochdale but it doesn't seem to be as simple as that. There appears to be some legal dispute between the Lord and the dowager Viscountess Rochdale that I had better not get entangled in. Perhaps it has been resolved? Anyway, we walked on towards Keswick and the sun at last came out (briefly), to show us the wonderful views we could have had. I think the Lake District does this sort of thing on purpose.

Right: The Seat Howe garden, with Barf beyond.

The following day was forecast to be rainy but it wasnít raining when we set off to walk north along the western side of Bassenthwaite Lake. It wasnít long, however, before we could see rain clouds approaching from the foot of the lake. Undeterred (for the moment), we strolled on through the village of Thornthwaite, passing at Seat Howe a bizarre garden of painted wooden sculptures mainly of (I am reliably informed) characters from the fevered imagination of the afore-mentioned Beatrix Potter. Is there no escape from her nightmares? The display was begun in order to provide entertainment for children able to pass by, but not call in, during the covid lockdowns.

We approached the hill of Barf (469 metres), the most prominent of the fells on the western side of Bassenthwaite Lake, and walked up past where a conifer plantation has recently been demolished, to be replaced, notices assured us, by native woodland. Barf itself was now in cloud and we were in rain ñ with the Skiddaw side of Bassenthwaite Lake having disappeared from view. We paused at a pretty waterfall in Beckstones Gill and, lacking in masochism and time, made our way back down. It would have been a shame to visit the top of Barf and see nothing at all of the renowned view of Bassenthwaite Lake and Skiddaw.

All the rain that falls on Barf eventually finds its way to Bassenthwaite Lake. Since the thought occurred to me a few years ago I am now no longer able to think of Bassenthwaite Lake without immediately thinking of it as Barf Water.

On the slopes of Barf, with Skiddaw being somewhere over there

[*] &nbspSince writing the above I have read the opinion of W.G. Collingwood, a respected historian of Cumbria, who wrote in The Lake Counties (revised edition of 1932) that "This legend is mediaeval but fictitious, being built up from recognisable sources. The name is from Bede and the story from common romances about the saints. The reality is even more curious. In the thirteenth century they still kept in St. Bees church an ancient (Norse) arm-ring or fibula-ring, probably of silver, on which litigants had to swear to the truth of their testimony, just as in the heathen Norse temples; in fact, it had no doubt come down from a pagan shrine. This Holy Ring (in Norse Baugr, in English of the day Beag) was in contemporary Latin Sancta Bega. There is only one other church of St. Bega, which is at Bassenthwaite; and there can be no doubt that the name is simply the Holy Ring personified."