From a distance the Howgill Fells appear to be a cluster of smooth, rolling, grassy hills. It is easy to picture heavy rain gushing unhindered off the hills, like water off a duck's back. Which is what happens, leading to the flooding of the surrounding fields and villages. On this walk we set out to look at one method of alleviating the problem. 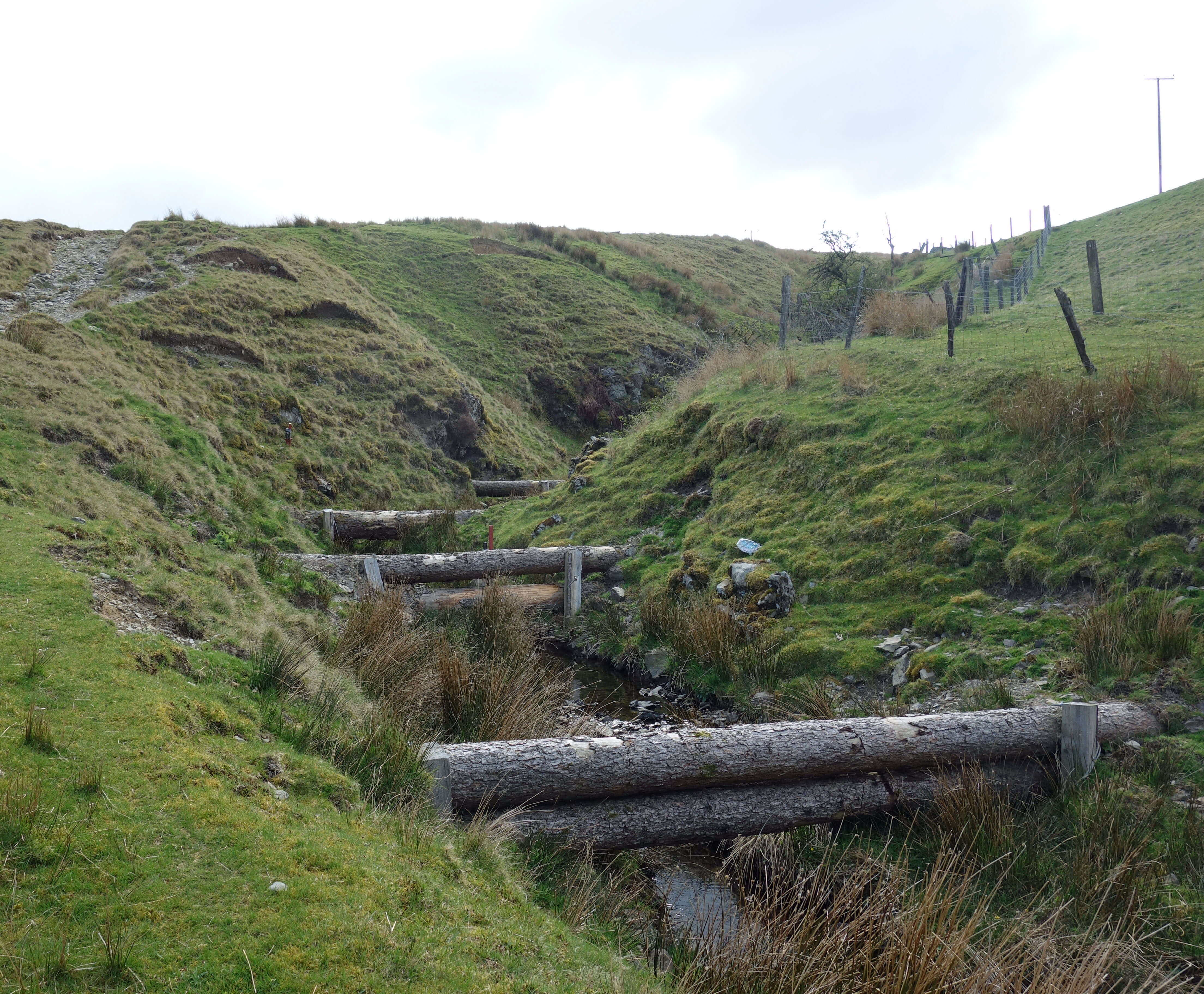 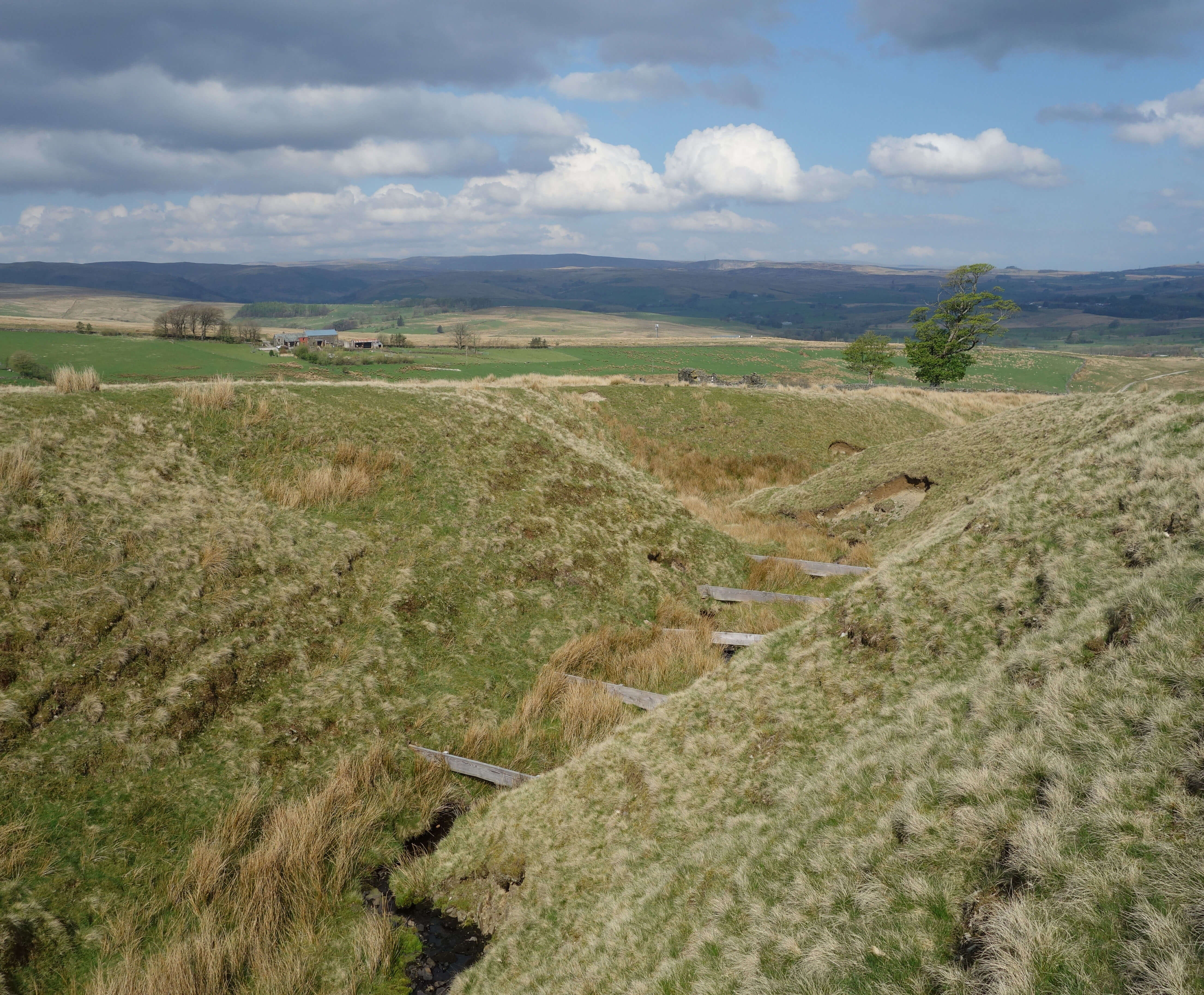 Old Tebay is liable to flooding because of water running off Tebay Fell in Tebaygill Beck and Overclue Gill. We headed south from Tebay, negotiating a multitude of tracks to reach a bridge near the confluence of the two becks. Here we found some ‘leaky dams’.

Leaky dams in Overclue Gill (logs to the left; planks to the right)

These are formed by fixing logs or planks across the beck, leaving a gap below. Under normal conditions water flows through the gaps but after a downpour there is too much water for the gap and it therefore builds up behind the dam, until eventually overflowing it. There are over a hundred such leaky dams on Tebay Fell. The idea, of course, is that all these mini-reservoirs will slow the flow of water downstream. It seems a simple enough idea – but the elements of the natural world are so interconnected that it is possible to solve one problem by creating two new ones instead. We’d mull over the effectiveness of leaky dams on our walk.

We walked up beside Overclue Gill, seeing a rounded hill ahead which we took to be our next objective, Knott (391 metres). After some time on the pathless terrain of moor grass we realised that we were approaching Hare Shaw (472 metres), having by-passed the insignificant rise of Knott to the east. We had walked further and higher than we thought. Usually, it is the opposite. The Hare Shaw cairn, marked on the map, is a modest creation – but then there are no rocks hereabouts.

Below: A view to show the walking terrain on Tebay Fell, looking north-west over Tebaygill Beck towards the Shap fells.

I am sure that the Environment Agency has thought about the maintenance of these leaky dams. We have a beck at the bottom of our garden and we know that in spate the beck brings down branches and tree trunks that may wedge across the beck to form natural leaky dams. We also know that subsequent spates will bring down mud, rocks and more branches to make such a dam less leaky or not leaky at all – or to wash the dam away. Presumably the same will happen with Tebay Fell’s leaky dams. It will be quite a commitment to keep all these leaky dams in order. Will the Environment Agency, starved of funds in recent years, consider this a priority?

From Hare Shaw the top of Blease Fell (474 metres) was directly ahead but we couldn’t walk directly to it because, unusually for the Howgills, an area had been fenced off, for no obvious reason. We had seen nobody else walking on the hills, as is often the case on the Howgills, these hills being a place to stride out on the ridges in quiet contemplation away from the bustle of everyday life. At Blease Fell, however, it is worth pausing to contemplate the bustle that one has escaped from. The M6 lies directly below. On this occasion, with something of a gale blowing on top, we could not hear the traffic but could only appreciate its serene movement along the sinuous road. To the east it was too hazy for good views of, for example, Black Force but to the west the clouds zipping along produced dramatic sights of Grayrigg Pike and Borrowdale. 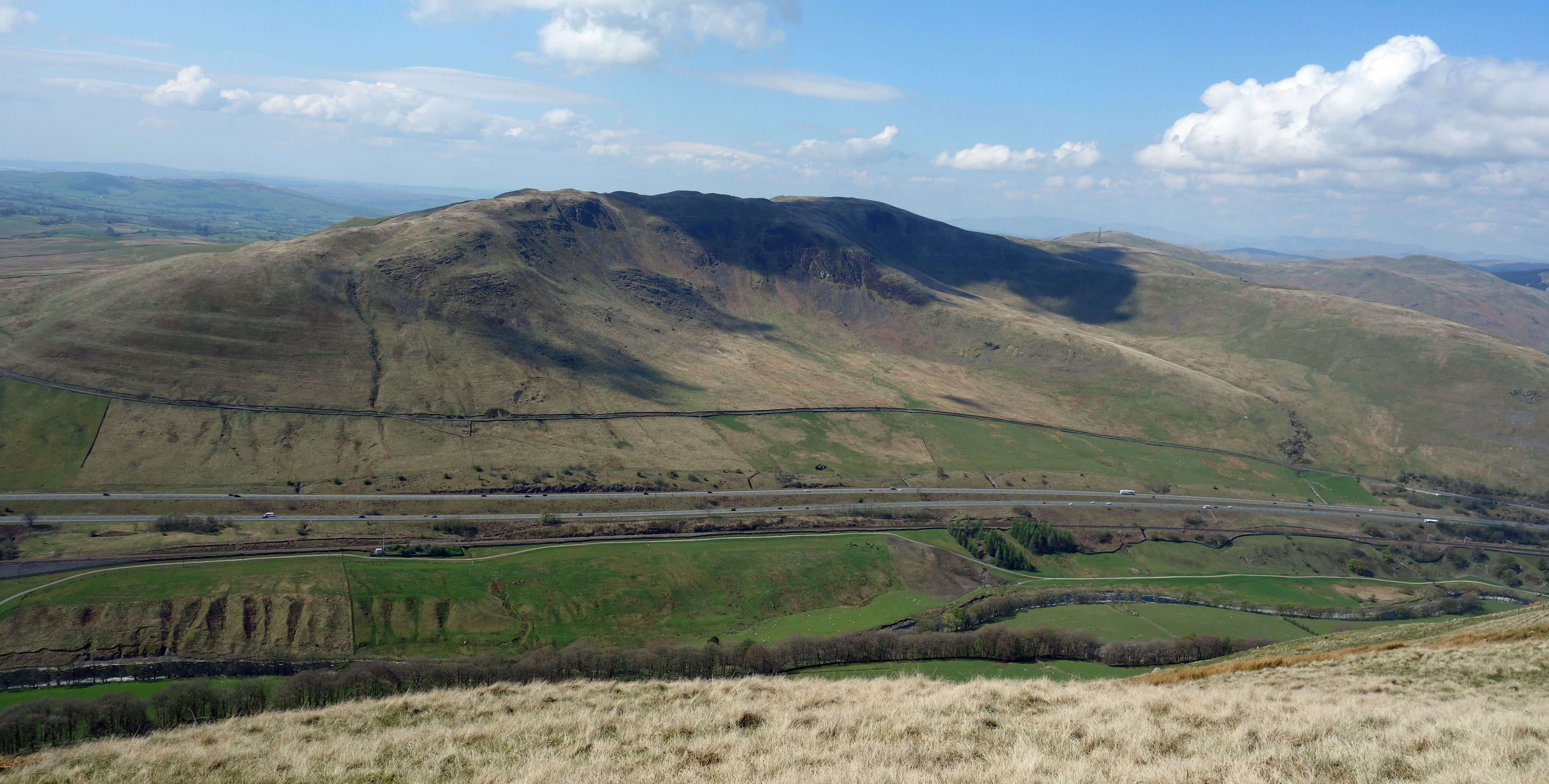 Two views from Blease Fell - (above) looking west to Grayrigg Pike across the M6 and (below) looking south to the River Lune, railway line and M6 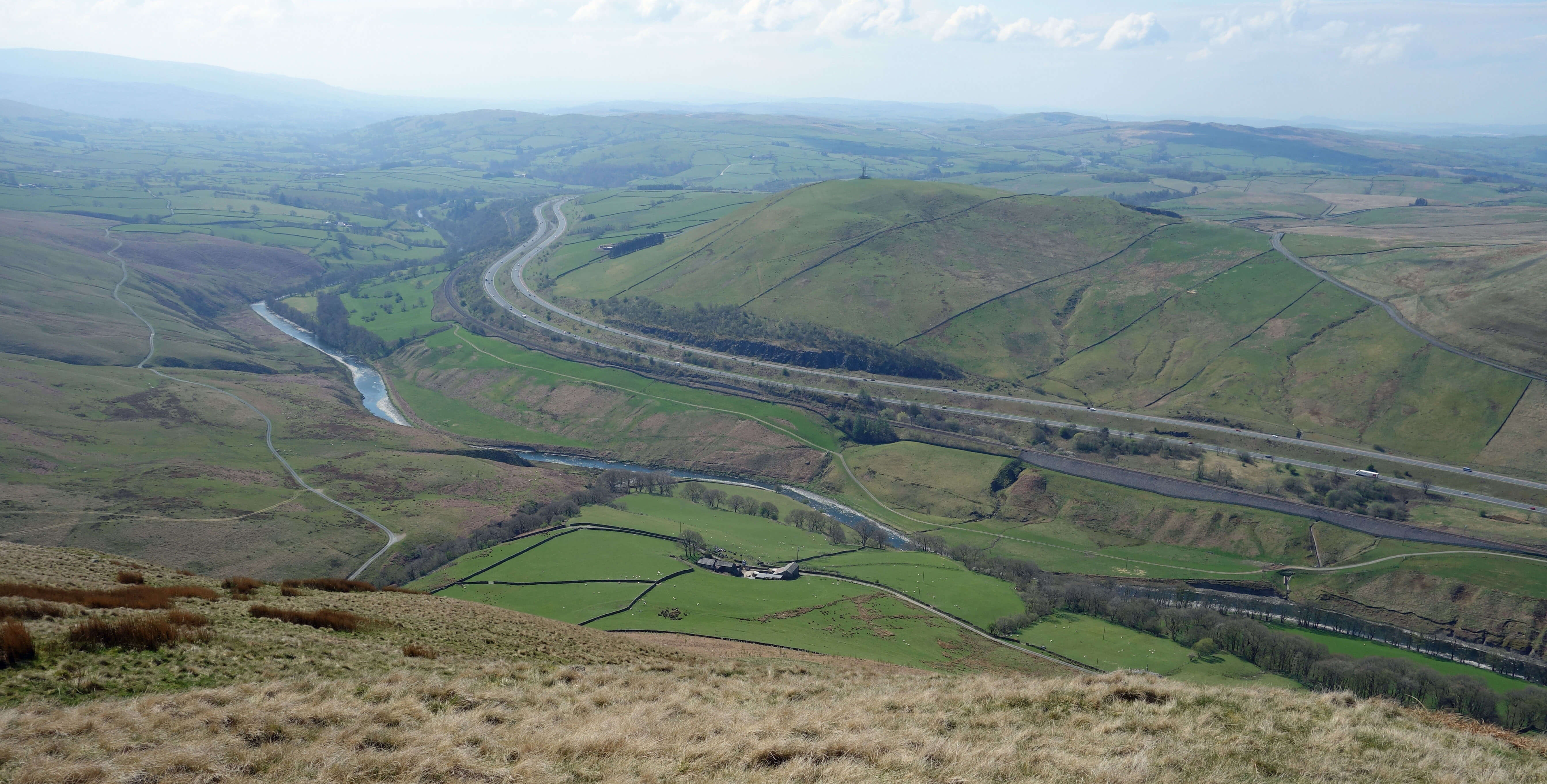 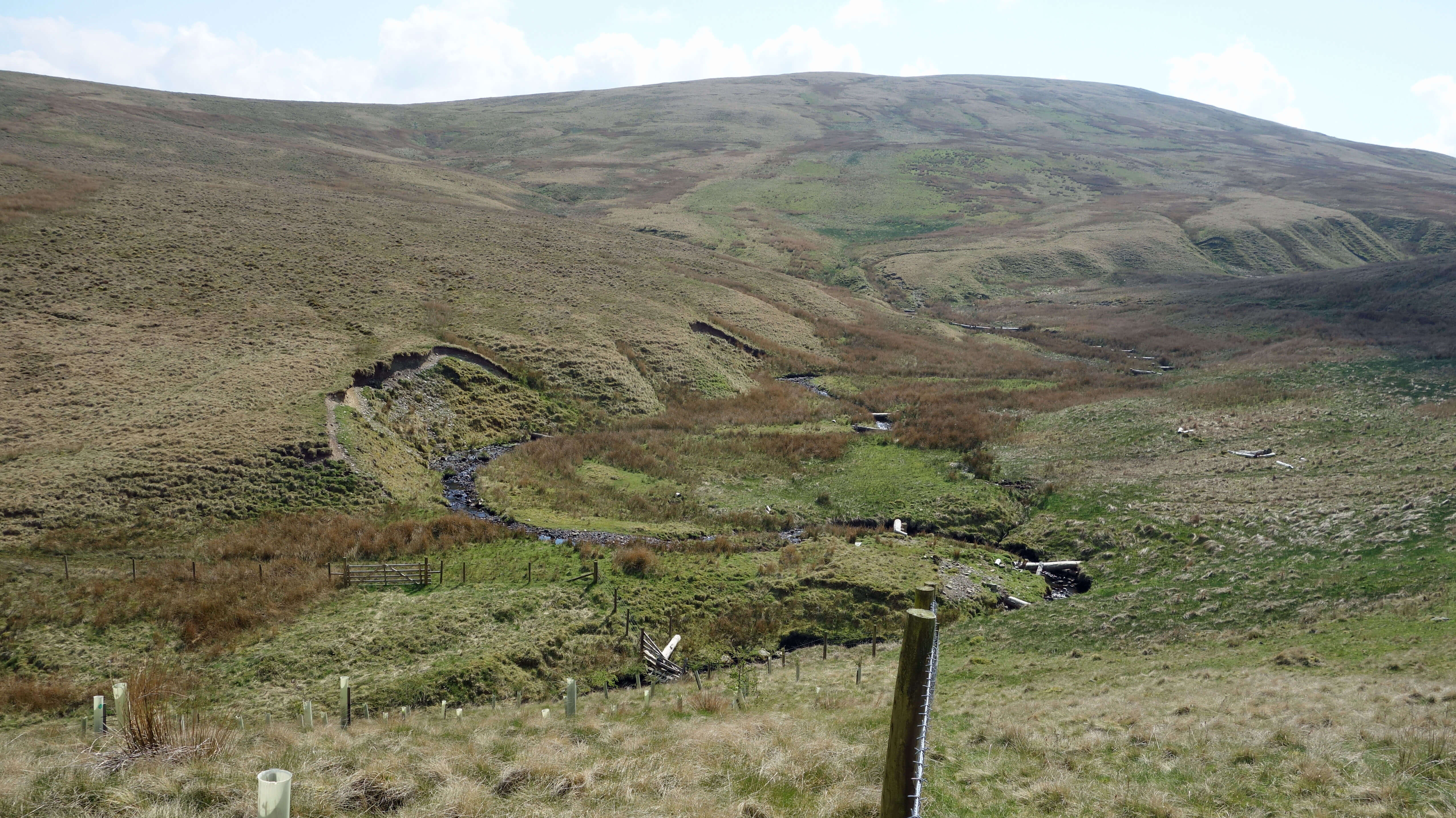 Right: Tebaygill Beck, with leaky dams (visible across the beck into the distance) and newly-planted saplings in the foreground.

From Blease Fell we turned north, dropping gradually to Powson Knott (372 metres), from where we cut down to Tebaygill Beck, for a sheltered lunch spot. Here there were more leaky dams. I don’t know if Tebaygill Beck is or was the home of migrating fish. I don’t see why not. I assume that the Environment Agency has carried out studies to show that the leaky dams are no problem for fish. I wonder. My impression is that fish need a good flow of water to travel upstream, can manage the occasional small waterfall, and appreciate pools to rest in. When water is over-flowing the dam, will fish swim through the gap or leap, from a ‘standing start’ in the less turbulent water of the mini-reservoir, over the dam? Over a hundred of them? It seems quite an obstacle course for the fish.

What about eels? Most dams on larger rivers now have eel passes. Do leaky dams need them? What about dippers? They like to fly low over a watercourse. Would they mind flying a bit higher, please? What about the insects in the beck that they eat? What about crayfish (I suspect they are absent from Tebaygill Beck but generally)? Some aquatic life is vulnerable to changes in flow. Nationally, there is a programme to remove obstructions such as dams from watercourses. It seems strange to be adding hundreds of sort-of-dams here.

I have seen a number of re-wilding projects during these Saunterings. This isn’t really one of them although the leaky dams are meant to mimic real ones caused by fallen trees (remarkably regimented ones in this case). Re-wilding here would involve the planting of trees, which used to cover these hills centuries ago. The trees would themselves slow the flow of water off the hills and provide branches and tree-trunks to form natural barriers. Just as I was wondering why they weren’t planting trees around Tebay Gill, when they have been prominently planted on the western slopes of Tebay Fell overlooking the M6, we came upon a fenced off area, which extended over the opposite bank, where they have indeed planted new trees. Maybe these trees will grow soon enough to render the leaky dams redundant.

As we continued down, we noticed that the tributaries of Tebaygill Beck had also been leaky dammed. Of course, one hopes that all these leaky dams are successful in reducing flooding – but what would this success entail for the rest of the Howgills? Are we going to see leaky dams on all the becks of the Howgills? Is this a sight we’d like to see? Each dam, on its own, is relatively natural but thousands of them would surely seem an eyesore.

A further thought occurs to me. If we are going to create so many mini-reservoirs, why not go the whole hog and create a proper reservoir? Of course, this is not a serious suggestion as presumably it would be much more expensive – and those fond of the Howgills would surely object. But isn’t it strange that a hundred years ago when engineers were creating the reservoirs of Thirlmere, Haweswater and Wet Sleddale (and had their eyes on several other Cumbrian dales, including Borrowdale just to the west) nobody, as far as I am aware, proposed a reservoir in the Howgills? Wouldn't, for example, Bowderdale – a straight, rarely visited, four miles of U-shaped valley with no village (such as Mardale under Haweswater) to drown – be ideal for a reservoir? Perhaps the geology wouldn’t allow it. Anyway, they didn’t and we should be grateful for that – although if they had then perhaps we’d be fond of a Bowderwater by now.


&nbsp157.   The Preesall Salt of the Earth
&nbsp156.   The Long and Winding Hornby Road
&nbsp155.   Two Sides of Bassenthwaite Lake and One of Derwent Water
&nbsp...
&nbsp153.   Thoughts from the Towpath (Galgate to Garstang)
&nbsp152.   Is the Purple Saxifrage on Ingleborough in Flower Yet?
&nbsp151.   From Cowan Bridge with the Brontës and Beyond