151. &nbspFrom Cowan Bridge with the Brontës and Beyond

By the old bridge at Cowan Bridge on the wall of the terrace that was once a Clergy Daughters’ School (shown left) there’s a plaque (shown right). A pedant immediately spots two mistakes. The apostrophe is in the wrong place and there’s no diaeresis (that is, two dots) over the ‘e’ of Bronte. Regarding the latter, the Brontë sisters’ father, born Patrick Brunty, would have been aghast that the plaque did not follow his masterful PR ploy to rename the family as Brontë. The new name was designed to add panache that would later aid the sisters’ literary careers. However, perhaps because printers of the day did not have an ë, the sisters (Charlotte, Emily and Anne) at first called themselves Currer, Ellis and Acton Bell when trying to get published – but perhaps more likely because they needed to pretend to be male.

As the plaque says, four of the Brontë sisters (Maria, Elizabeth, Charlotte and Emily) spent a year at the Clergy Daughters’ School in Cowan Bridge in 1824-25. To say it was a miserable time would be an understatement. The two oldest daughters (Maria and Elizabeth) became ill and died shortly after returning to Haworth. They were not especially unlucky in that regard. Half of all deaths in the region at that time were of children under ten, reducing average life expectancy to just 26 (Wellburn, 1997). The period was no doubt traumatic for the surviving sisters. Charlotte drew upon the experience in Jane Eyre, where Lowood, Mr Brocklehurst, and Brocklebridge Church are analogues of the Clergy Daughters’ School, the Rev. Carus Wilson (the headmaster) and Tunstall Church, to which the sisters walked on Sundays.

I followed their path. It led first to the hamlet of Overtown, which lies on the Ribchester to Carlisle Roman road. An inviting track is on the line of the Roman road but it is not a public footpath. Instead I spent a few minutes looking for the Roman milestone that is said to be at the corner of the modern road. If it’s the two-foot-high, moss-covered stone I found then I hope that some expert has good reason to declare it a Roman milestone.

Looking back to Overtown 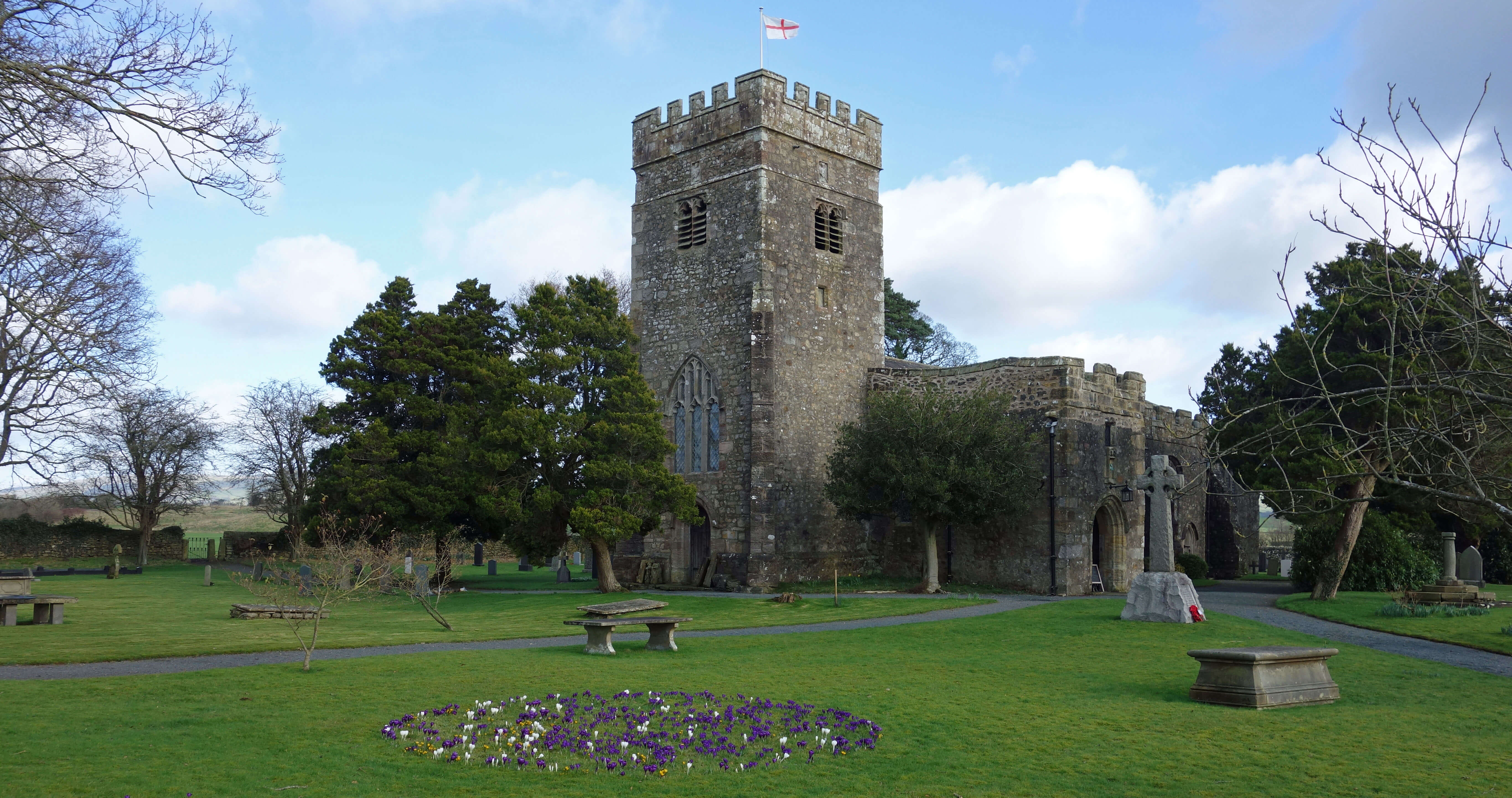 It is surprising what you come across hidden away on back roads. Further along Woodman Road I passed several large sheds, a veritable industrial complex amongst the fields, with no sign saying what they were for. They used to be for chickens – and probably still are but I could not see, hear or smell any sign of them. If they are there, they’re certainly not free-range.

I now followed a track south past Churchfield House. The Charlotte Brontë description of this walk says “a bitter wind, blowing over a range of snowy summits to the north, almost flayed the skin from our faces”. That’s a fair description of the day of my walk. There was snow on the northern hills of Gragareth and Ingleborough, with a cold wind but at least some sunshine.

The track ended near Tunstall Church, which was the Brontës’ destination. According to Jane Eyre, “we set out cold, we arrived at church colder: during the morning service we became almost paralysed”. While the 15th century church looks much as it did in the Brontës’ time, since it escaped the 19th century renovations that were carried out on most churches, it did not appear so bleak to me. I wandered inside and it seemed, like most churches, more spacious than expected.

Here I left the Brontës because they, of course, had to walk back to Cowan Bridge. I walked on to the village of Tunstall and towards Thurland Castle, once the home of the illustrious Tunstall family. I had always previously been driving past the castle, usually with the trees fully leaved, and I hoped that this time I would be able to view it properly. But the castle was quite distant and still largely hidden by trees. It is now strictly private and has, in any case, been converted into a dozen or so flats. I feel that an ex-castle that is no longer fulfilling its castling duties should be stripped of its title. 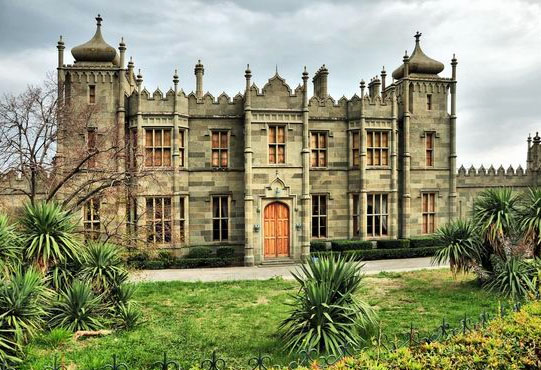 I carried on south on back roads, since the main roads were busy and the fields were waterlogged. It was quiet and pleasant enough but my mind had wandered – as probably yours has too. I knew that it had been predicted that while I was out walking Russian forces would, on their second day in Ukraine, be entering its capital, Kyiv.

I reflected that in the 1990s I had been involved in an EU project involving partners from Bulgaria, Romania and Ukraine. None of those countries were members of the EU at the time but the political aim of the project was to demonstrate EU’s largesse (all three were relatively poor) so that they would seek EU membership. The first two eventually did but not Ukraine.

Our Ukraine partners were from Simferopol in Crimea and they arranged for the project meeting to be held in Partenit, on the Black Sea coast. We stayed at an old Soviet Union ‘military resort’ that reminded me of the holiday camps of my childhood, except that it was surrounded by a security fence – to keep us in. I asked to walk up the nearby Bear Mountain and I was allowed to do so but only under escort.

We were taken on an appropriate outing to Yalta, where we saw the room in which in 1945 Churchill, Roosevelt and Stalin signed the Declaration of Liberated Europe, which did so much to cement the divided Europe that the EU was in the 1990s trying, not so subtly, to unite. We also visited the nearby Vorontsov Palace, which is a most peculiar building. It was built (1828-1848) in a mélange of architectural styles by Edward Blore, who is described by Wikipedia as an "English landscape and architectural artist, architect and antiquary", although he had no formal training in architecture. He is better known for completing John Nash's design for Buckingham Palace. From the north Vorontsov Palace looks like an over elaborate British stately home (above left). From the south it is the palace of an Indian maharajah (above right - these two are stock photos on-line, not my photos). No doubt Blore was trying to capture the both-west-and-east nature of the region. Now, of course, Partenit, Yalta and Vorontsov Palace are within Russian-occupied territory – as much else will be soon, perhaps. I fervently hope not. I was once partners with a few Ukrainians: I feel partners with all of them now.

I sat on the green at Wennington, waiting for the bus. A dipper zipped along the river and three buzzards frolicked high above.


&nbsp154.   Damming the Howgills
&nbsp153.   Thoughts from the Towpath (Galgate to Garstang)
&nbsp152.   Is the Purple Saxifrage on Ingleborough in Flower Yet?
&nbsp...
&nbsp150.   Psychogeographic Walking around Burnley
&nbsp149.   Wayfinding and the Highfields
&nbsp148.   The Man on the Clapham Omnibus …