Although I have relaxed my original aim to provide a balanced impression of North-West England by visiting parts of the region more or less at random I do occasionally stick a pin in the map to generate some variety. This time the pin pierced Burnley. So, I thought, if Iím to walk around Burnley then I must make a point of seeing Ö

What? I realised that I was quite unable to complete that sentence. I knew nothing at all about Burnley. I have been to Burnley only twice, decades ago, to Turf Moor (Burnleyís football ground). As far as I recall, there is no moor there. Normally, before a walk, I read what I can to see what features can be combined into some kind of narrative. Now, with Burnley, I had the irresistible opportunity for a different kind of walking Ė psychogeographic walking, walking without the map in my pocket that I said in 149 that I always have.

Psychogeography is a thing. It is described in Wikipedia, so it must be. Wikipediaís first two sentences state that:

ďPsychogeography is the exploration of urban environments that emphasizes interpersonal connections to places and arbitrary routes, and follows a loosely defined urban practice known as the dťrive. It was developed by members of the Letterist International and Situationist International, which were revolutionary groups influenced by Marxist and anarchist theory as well as the attitudes and methods of Dadaists and Surrealists.Ē

Thatís six Ėists in one sentence. If I were to read up on all those Ėisms, plus the long-worded tomes on psychogeography itself, in order to appreciate fully the philosophy of psychogeography then I would have no time left to get out walking. The two facets of psychogeography that matter here are, first, it is concerned with urban walking rather than walking on the hills or in the dales, and, secondly, the walk should be somewhat aimless. Most urban walking is purposeful, from the car-park to the dentist, say. Much of it may be repetitive, for example, following the same route to work every day. In order to gain a more profound understanding of an urban environment one should, psychogeography suggests, walk about it with no specific goal in mind but follow a path at whim or at random, to better absorb whatever is encountered along the way. You could, for example, follow a randomising algorithm such as Ďfirst right, second left, first left, repeatí, as suggested in A New Way of Walking.

I am always up for a new way of walking, so I would try this in Burnley. I would read nothing about Burnley and not study any map. I would walk from the railway station and let the algorithm suggested above (R2LL) Ė ďneither goal-oriented nor random, structured but always surprisingĒ Ė tell me where to go. I could hardly wait. What exciting new experiences would I encounter?

I was surprised to find that Burnley has three railway stations. Burnley Central seemed the best bet. I was also surprised to find that it takes nearly an hour to travel the 20 miles from Preston to Burnley. Thatís because the train has up to 13 stops. I say Ďup toí because some of them are Ďrequest stopsí. Request stops on the train between two major Lancashire towns! Despite the dawdling speed, I nearly missed Burnley Central. The announcer said that we had reached Burnley Barracks but I noticed that the station itself said Burnley Central. So I made a dash for it. The announcer had not noticed that nobody had requested a stop at Burnley Barracks! 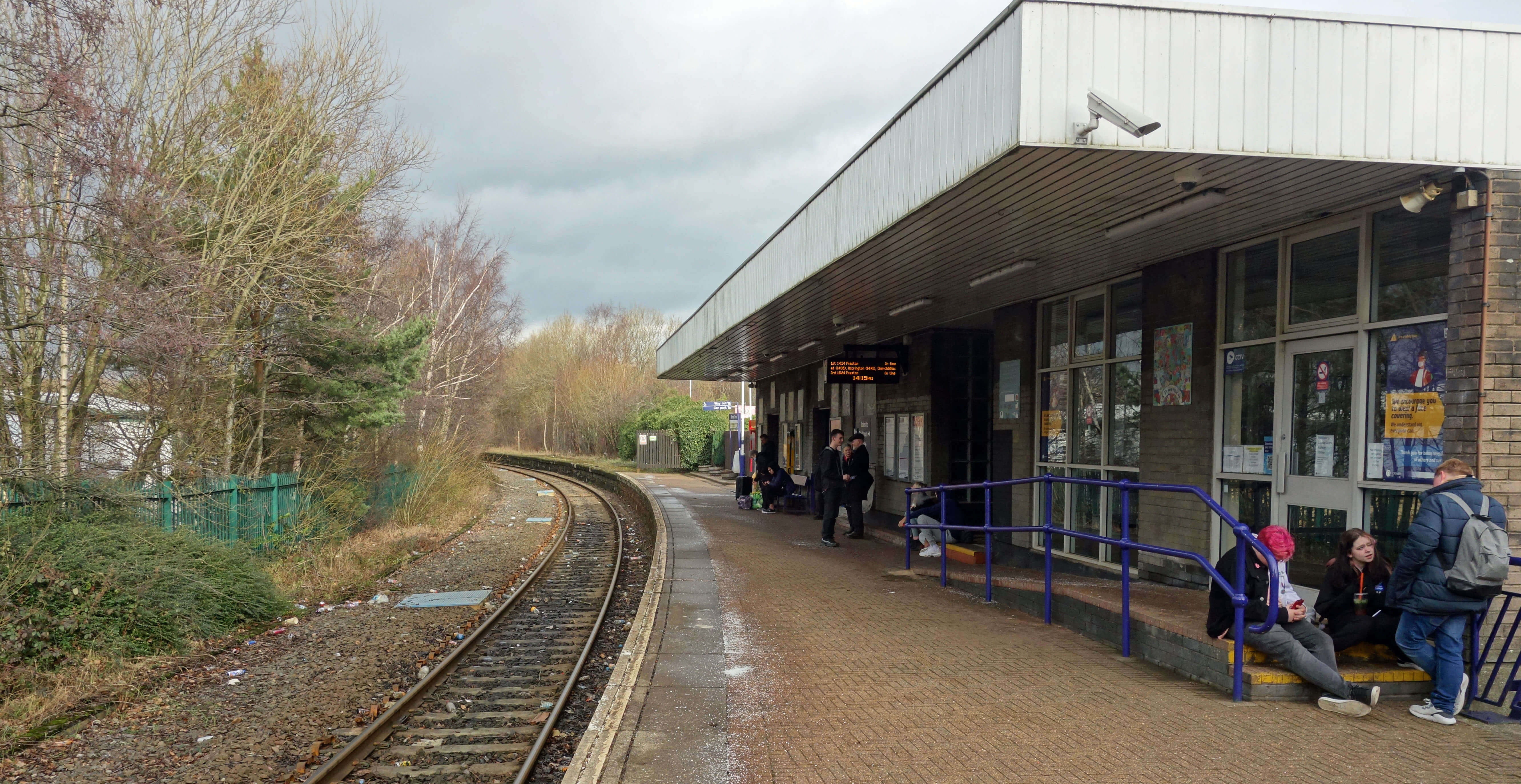 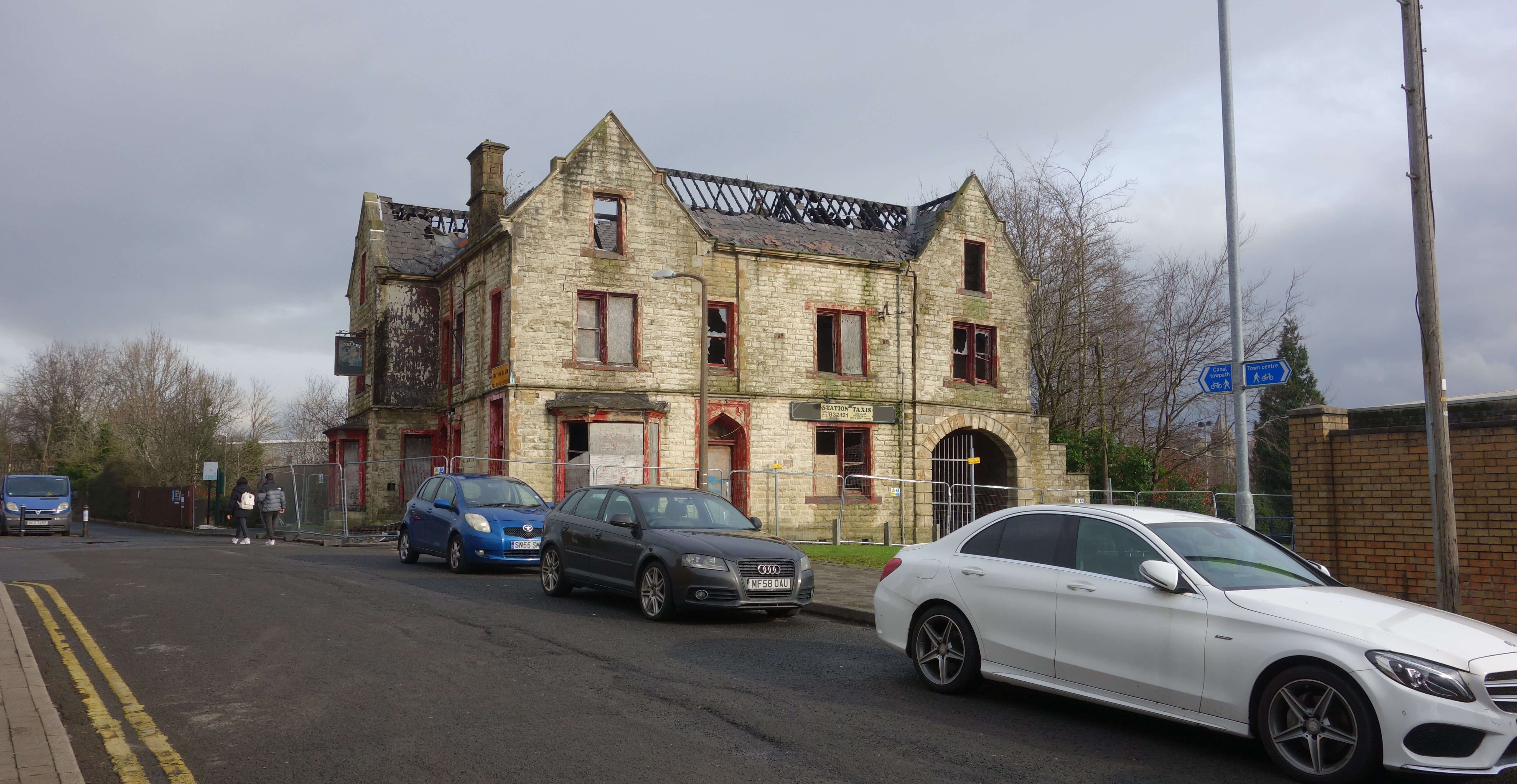 Burnley Central (left) and the view from its exit (right)

I was expecting a more impressive station than Burnley Central turned out to be. Just a single railway line and platform. I paused at the exit. I knew that I would eventually have to find my way back here and hoped to see some distinguishing landmarks. I was confronted by a high wall (that turned out to be the back of Sports Direct) and a once grand but now very derelict building. At least I could tell from the sun that I was facing south. I turned R to walk to a T-junction. I was now looking for 2L, not L or R Ė so what to do?

I had anticipated such a problem. R2LL rather assumes neat right-angle crossroads, which we don't often have. I had resolved that, when seeking a L, I would walk on the left-side of the path, looking for a gap. There was no gap at the T-junction so I just followed the wall round, and similarly at the next T-junction. Now I was on my way, along a dual carriageway, past Sainsburyís, past Prestige Park (which was a large empty building with a blue plaque for being ďprobably the first factory building financed by a local authority out of the ratesĒ), past Thursby Gardens (a small park, which I counted as the first L, to be ignored), over a canal Ė and then, at last, to my 2L, along a terraced road. My next L was a dead-end, so I retreated to turn L on Daneshouse Road, thus completing my first R2LL.

My next R took me onto a canal path, which made a pleasant change, although there was plenty of rubbish for the geese and ducks to contend with. The canal meandered but I was basically walking north now, passing under a railway line. The 2L took me onto Lower Manor Lane in an estate of semi-detached houses, with the M65 audibly near. I tried two Ls but both were dead-ends but since I was in a posher area Iíll call them cul-de-sacs.

The canal (left) with ducks invisible amongst the rubbish (right)

I was failing to get into the spirit of psychogeographic walking. I was too focussed on all the Ls and Rs. I felt like a mouse scuttling along a skirting board seeking a hole to escape by. I should have been appreciating whatever the turns enabled me to stumble upon. The advocates of psychogeographic walking picture strolling around great metropolises such as Paris and New York, where you might expect every street to be adorned with buildings of architectural or historical significance or at least to encounter some activity out of the normal. That didnít seem to be the case with Burnley.

I took a L onto a busier road with no pavement, passed Barden Lane Stables and crossed a river. Iíve left the river unnamed because it is, it seems to me, a shortcoming of psychogeographic walking that the unknowns encountered stay unknown. A road R was another dead-end (a circus was in hibernation here: is that interesting?). I noticed a sign to a Coal Mining Museum but that was to the L and therefore not allowed. I was now walking by green fields and passed a ĎWelcome to Pendleí sign which was not welcome, as it indicated that I was leaving Burnley. I crossed the M65 and walked some way looking for my R.

Was this wise? A sense of being lost was creeping over me but not yet completely so. Burnley Central was, Iíd guess, some way behind me to the left. Where would R2LL take me? I had doodled with R2LL beforehand and had found that if all your paths are north-south and east-west with intersections every 100 metres then after four iterations of R2LL you will have walked 1600 metres and be back exactly where you started. You will have completed an anti-clockwise loop, and thereafter will follow the same path forever. Of course, our cities are not laid out on regimented lines but nevertheless R2LL is bound to have a tendency to generate, on average, an anti-clockwise path. If I persevered with R2LL it might swing me back towards the vicinity of Burnley Central. But I had crossed a canal, a railway line, a river and a motorway. There was no guarantee that R2LL would find a way back across them Ė especially the motorway. For all I knew, there may be no motorway bridge for miles.

So I aborted R2LL and walked back on Barden Lane, which seemed a road determined to take me somewhere useful. I crossed a canal, with new canal-side flats, walked under a railway line, passed a college campus and eventually reached a distinctive triangle of roads. Here I consulted the map for the first time. I was more or less where I thought. I'd reached the A682, the Colne-Burnley road, and just had to walk south into Burnley, with the station to the right. So I put the map away and began a different form of psychogeographic walking, where you just wander at whim about a town. 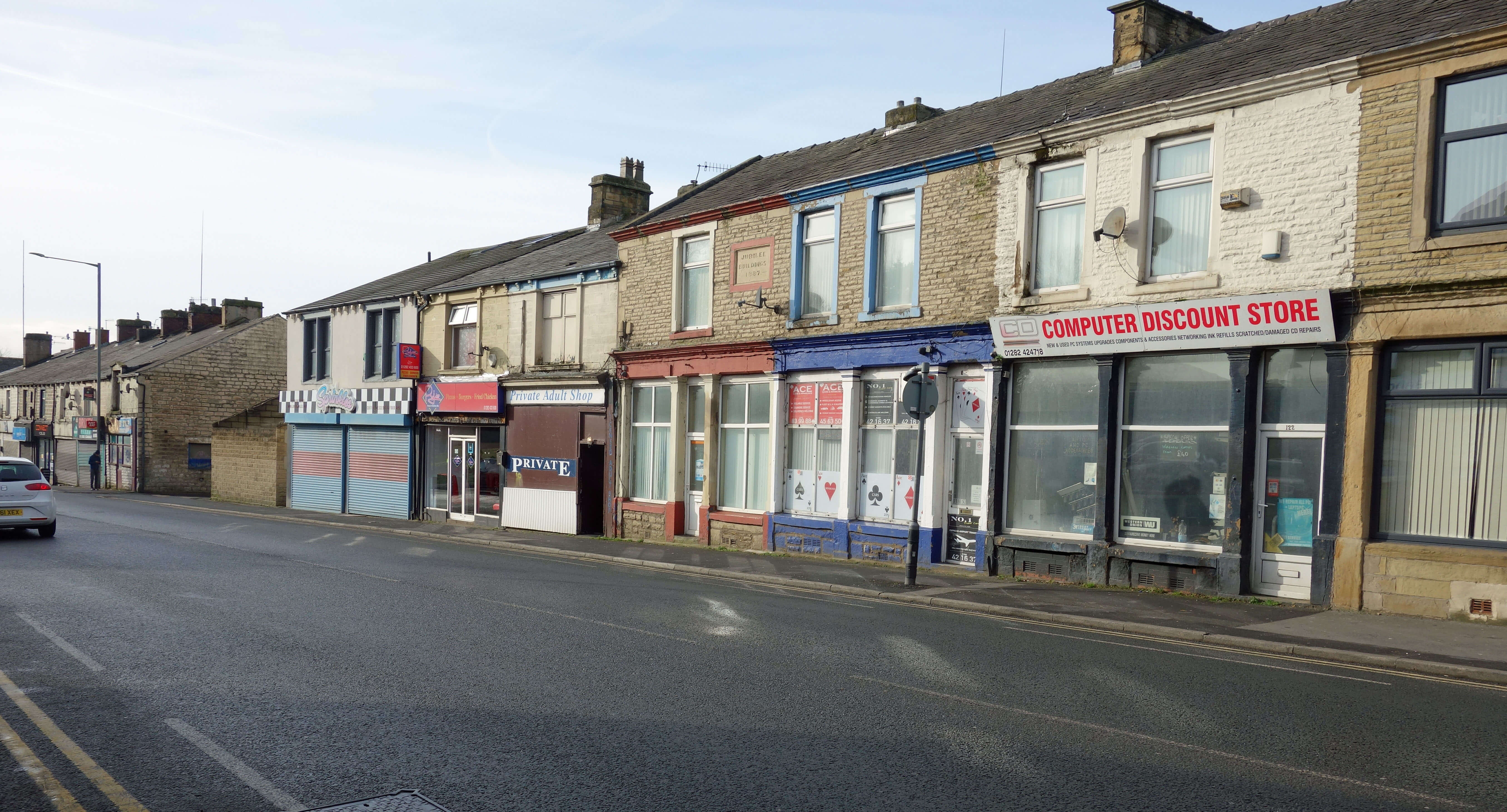 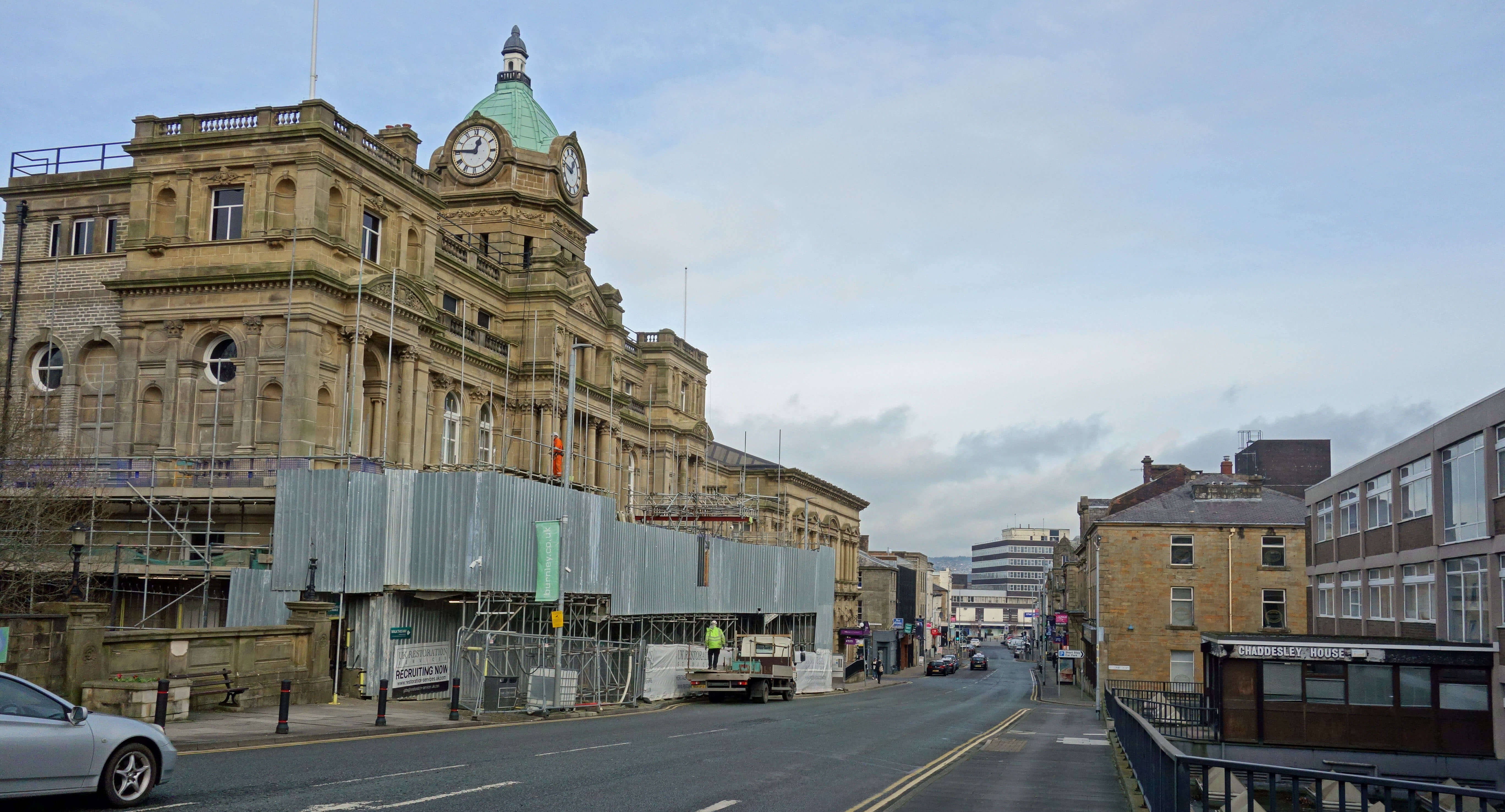 The A682 was rather grim, considering it is one of the main thoroughfares into Burnley. Buildings were being left to fall down. Most of the small shops had long been closed. One of the shops that was open was a ĎPrivate Adult Shopí. I didnít know such shops still existed. I turned left onto Church Street, which seemed to be part of a kind of inner ring-road. I passed a car-park, a bus station (this building looked quite bold), a Tesco, a police station, and so on Ė but saw no sign to anything that a visitor might wish to see.

I wandered into the island within the ring-road. Is this really the heart of Burnley or is it elsewhere? I noticed no buildings of interest Ė although no doubt my powers of observation are weak. One building rather grander than most may have been the town hall but it had protective covering for repair work so I couldnít tell. I canít remember seeing any grass or trees anywhere on this island. I sat in the Charter Walk Shopping Centre for a while. My impression was that the people walking about seemed somewhat harassed, grey, unfit, short and unsmiling. There were more smokers than I have seen elsewhere in years. No doubt there are statistics about such things: I am only giving my impressions.


&nbsp153.   Thoughts from the Towpath (Galgate to Garstang)
&nbsp152.   Is the Purple Saxifrage on Ingleborough in Flower Yet?
&nbsp151.   From Cowan Bridge with the Brontës and Beyond
&nbsp...
&nbsp149.   Wayfinding and the Highfields
&nbsp148.   The Man on the Clapham Omnibus Ö
&nbsp147.   Snow-Walking in Littledale