... is an ordinary, respectable man (it is a British legal term to that effect). On Tuesday he was me Ė although my bus wasnít very omni. I was the only person on it for most of the way, apart from the driver, of course. After a grey December, the first sign of sunshine in the weather forecast had encouraged me to hop on the bus to the Yorkshire Dales. I aimed to take a low-level walk along the southern border of the Dales between Clapham and Settle, which is a walk roughly along the line of the Craven Faults that separate the limestone hills of the Dales from the younger millstone grit moors of Bowland.

From the bus I watched as the promised sunshine appeared over the eastern horizon. I arrived in Clapham to find it empty, for a change. I was tempted to dally there, exploring it without the usual crowds, but I had far to walk. I headed through the Ingleborough Hall tunnels to reach Thwaite Lane. This track is part of the ancient monastic road from Fountains Abbey to its estates in Cumbria. The road ran along Mastiles Lane past Malham, through Settle, along this track, and on to Ingleton.

After a mile I left the track to walk across fields to the limestone crags of Nappa Scars and then on to Norber Brow. Here are the famous Norber Erratics, surely the most impressive accumulation of erratics in the country. Hundreds of huge grey boulders lay scattered over the limestone fields, some perched on pedestals. Glaciers moved them here from further up Crummackdale and subsequent erosion of the limestone not under the boulders has created the pedestals. Recently one of the most iconic pedestalled boulders has toppled Ė or rather has been toppled. A paper in Cave and Karst Science (which can be found by googling "demise of a Norber boulder") considers it very likely that someone used a crow-bar to topple it. Why would anyone do that?

A few of the Norber Erratics 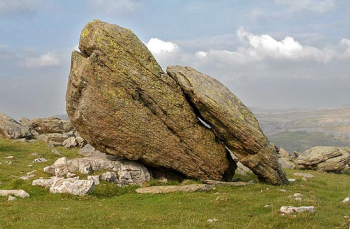 Right: The toppled erratic (before and after), from the Cave and Karst Science paper.

Among our Christmas messages there was a comment that said ďthanks for all your Saunterings during the year Ė each one has lifted my heart and sustains me in my enthusiasm for this beautiful world!Ē That is, of course, cheering to hear but I have to say that it has not been my aim to present North-West England as beautiful. As I said in the Preamble, I had the vague aim of giving a balanced impression of the region by visiting places within it more or less at random. The pandemic rather put the kibosh on that. Nevertheless, I have written about things that would fit under a Ďwarts and allí category:
ē &nbspscruffiness around Thieveley Pike (34); squalor between Heysham and Overton (123); a rubbish tip in Dentdale (135).
ē &nbspwalks that I wouldnít recommend to anybody Ė along the A682 (66); from Skitham to Nateby (103); on the northern outskirts of Preston (138).
ē &nbspregions that are attractive only because of questionable practices Ė 'sheep-wrecked' hills denuded of vegetation (17); grouse moors that are ecological deserts (99).
ē &nbspthe loss of wildlife Ė eels (4), hen harriers (59), salmon (66), belted beauties (76), cuckoos (91).
ē &nbspre-wilding projects, which all implicitly acknowledge that weíve made such a mess of our world that we should try to repair it Ė re-foresting the Howgills (38); re-meandering the Lyvennet (97); re-naturalising the Long Preston Deeps (145).
ē &nbsppolicies that may harm our environment Ė zip-wires in the Lake District (3); green lane policies (60); a 'garden village' near Lancaster (136); firing ranges (142); climate change (146).
If, despite all this, the region seems beautiful then we must not forget that there are still many things to be concerned about. Which includes vandalism of the Norber Erratics.

But we mustnít focus only on the negatives or weíd never get out of bed in the morning. I passed a man walking his dogs who said ďGrand day!Ē as is the custom hereabouts, at least when it is a grand day, as it was. The becks were full to the brim with rushing, sparkling water, fresh from the overnight rain. I walked along Wood Lane and Hale Lane, narrow, probably ancient, tracks between stone walls, to reach the hamlet of Feizor. Here I was surprised to find the cafť not only open but busy for a Tuesday morning in January. I had passed this cafť in 2008 or so, shortly after it had opened. At that time I thought it an overly ambitious venture, since Feizor was tucked away up a cul-de-sac. Clearly, I was wrong.

Pot Scar, with Ingleborough in the distance, from Feizor Thwaite

Looking from the knoll in the opposite direction, to the south, I could see on the horizon the dark outline of the enigmatic so-called Celtic Wall. I walked to it. It is a solid wall, over a metre thick and not much higher, but it is only twenty metres long. As far as Iím aware, the age and function of this wall is not known, a circumstance that seems to bother some people. It doesnít bother me much Ė there are many other things Iíd prefer to know the reason for. For example, why someone took a crow-bar to the Norber Erratics, but I mustnít start on that again.

I continued south and came upon Dead Manís Cave. I wasnít really looking for it. Searching for caves marked on the map is often a futile exercise, for me. I wandered a little way into the cave. There was no body there.

Further on I came to the edge of Giggleswick Scar and walked along its rim to Settle. The scar itself is rather less impressive from the rim than it is from below but it was a good path and there were fine views over to the Bowland hills, softened a little by the hazy moisture in the air. Pendle, for example, was just a light grey outline. The path skirted the huge crater of Giggleswick Quarry, which closed a dozen years ago. I understand that the old quarry has been bought to develop into an Ďindustrial facilityí but I could see no sign of such activity within the crater.

I returned on the Settle omnibus, with the sun setting over Morecambe Bay and lending a diffuse orange glow to the gathering valley mists.


&nbsp151.   From Cowan Bridge with the Brontës and Beyond
&nbsp150.   Psychogeographic Walking around Burnley
&nbsp149.   Wayfinding and the Highfields
&nbsp...
&nbsp147.   Snow-Walking in Littledale
&nbsp146.   A November Day around Grasmere and Rydal Water
&nbsp145.   Naturalising the Long Preston Deeps