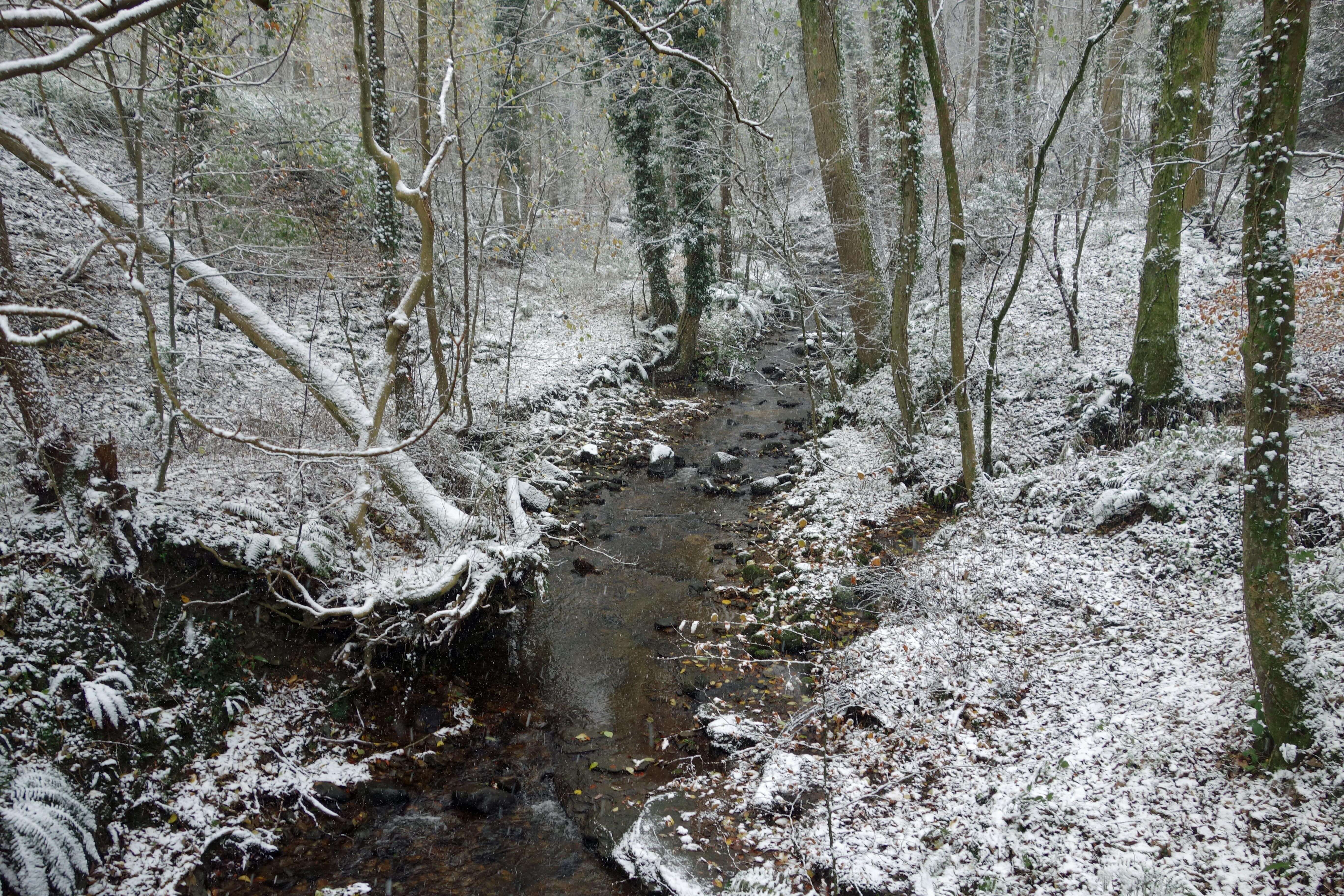 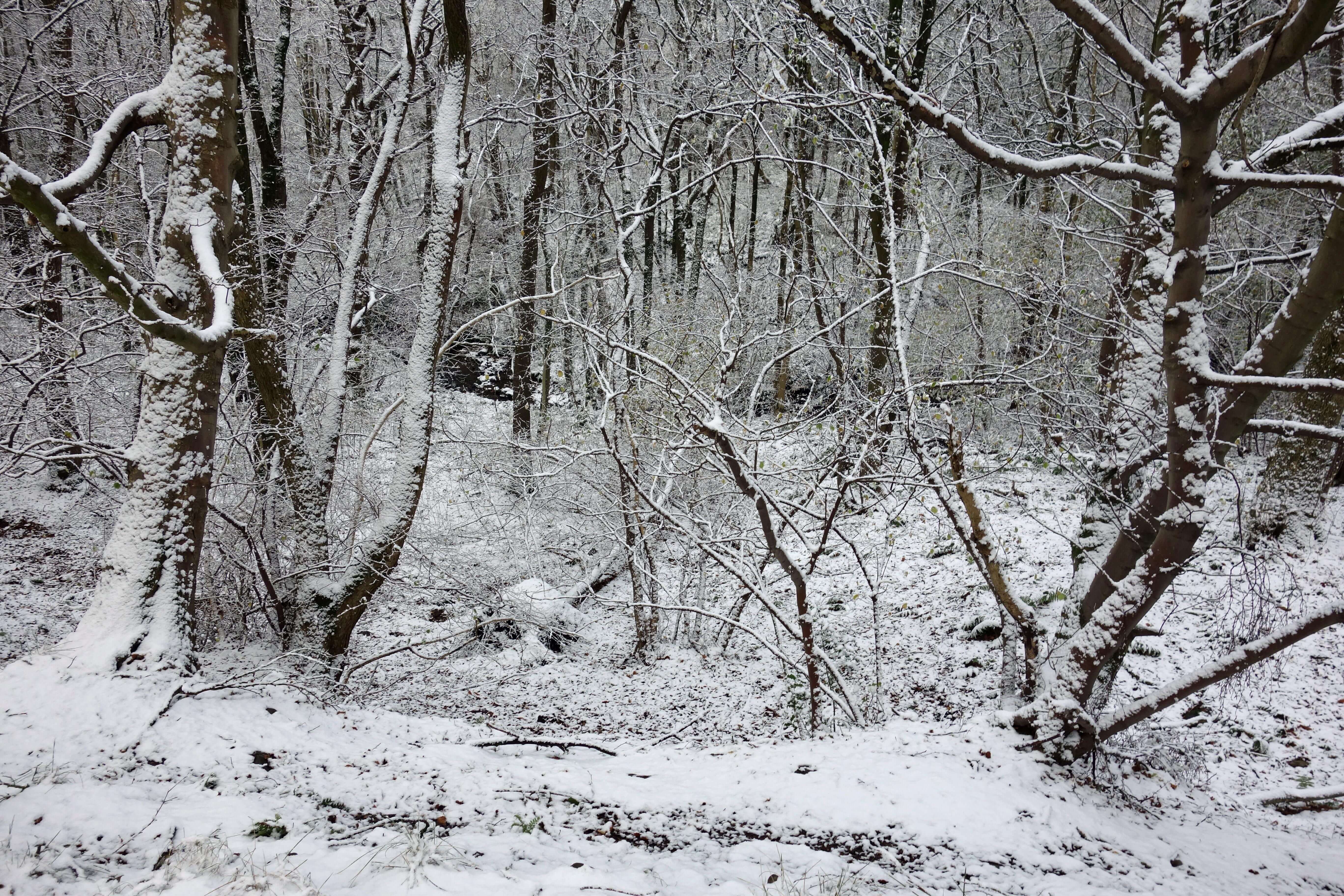 Inevitably, I wrote too soon (in 146) about the lack of snow on our hills. I am sure that the hills have plenty of snow now, just six days later. We have snow on our lawn, at a height of about 50 metres. I doubt that we have had a white lawn in many Novembers of the previous forty-plus years. Whatever happened to those wonderfully mild autumn-winters of recent years when we could go walking without even thinking of wearing gloves?

The weather forecast this morning was for ëlight snowí but it seemed unlikely to me so I dismissed it as the forecasters being pessimistic as usual. At 11 oíclock there were a few wisps and then more determined flakes began to fall. Gradually the world turned white. I had already intended to go for an hourís walk from home (Ruth having commandeered the car for a rehearsal and concert in Morecambe) so, undeterred, I donned gloves and beanie hat and set off up-hill. Quarry Road, the road up to the Caton Moor windmills, was already white. Snow was still falling and it was a pleasure to stride out, being the first to crunch into the crisp snow, making my mark in the world, if only temporarily. There was little wind as the snow gently fell from grey clouds and the world was silent, apart from a low hum, which I assumed to be the sound of the motorway five miles away reflected from the clouds. There was nobody about, until a car drew up and disgorged a family, to frolic excitedly in the snow.

I wandered back down, quite exhilarated. I have walked and run on these roads and tracks hundreds of times but suddenly, in the snow, they are transformed. Every tree, shrub and wall is neatly delineated by fresh snow lining all the branches, twigs and stones. Snow-walking was such fun that, after a quick sandwich, I went out again, for a longer walk. When I grow up I will probably be less excited by the first snowfall of winter.

This time I set off to walk in Littledale. It was still snowing but not quite as much. I was disappointed to find the Littledale Road free of snow but it has no doubt been salted and I suppose people must be allowed to drive on it. Never mind, I soon left it to take the track that was the old road, where there was plenty of snow, and dropped into Crossgill. Here, for the first time, I saw evidence that I was not the first on these snowy lanes. I detected the boot-prints of two people walking side-by-side, who seemed to have walked between Crossgill and Hawes House. On the Roeburndale Road I saw remarkably smooth, foot-shaped prints. So foot-shaped were they that I inspected them to see if they had toes. They didn't. The foot-prints were about a metre apart. I deduce that someone had gone running in their slippers, an activity even sillier than my own, since there was ice under the snow in places. But perhaps not as silly as that of a bold cyclist who had left tyre-prints in the snow, not always following the intended line. 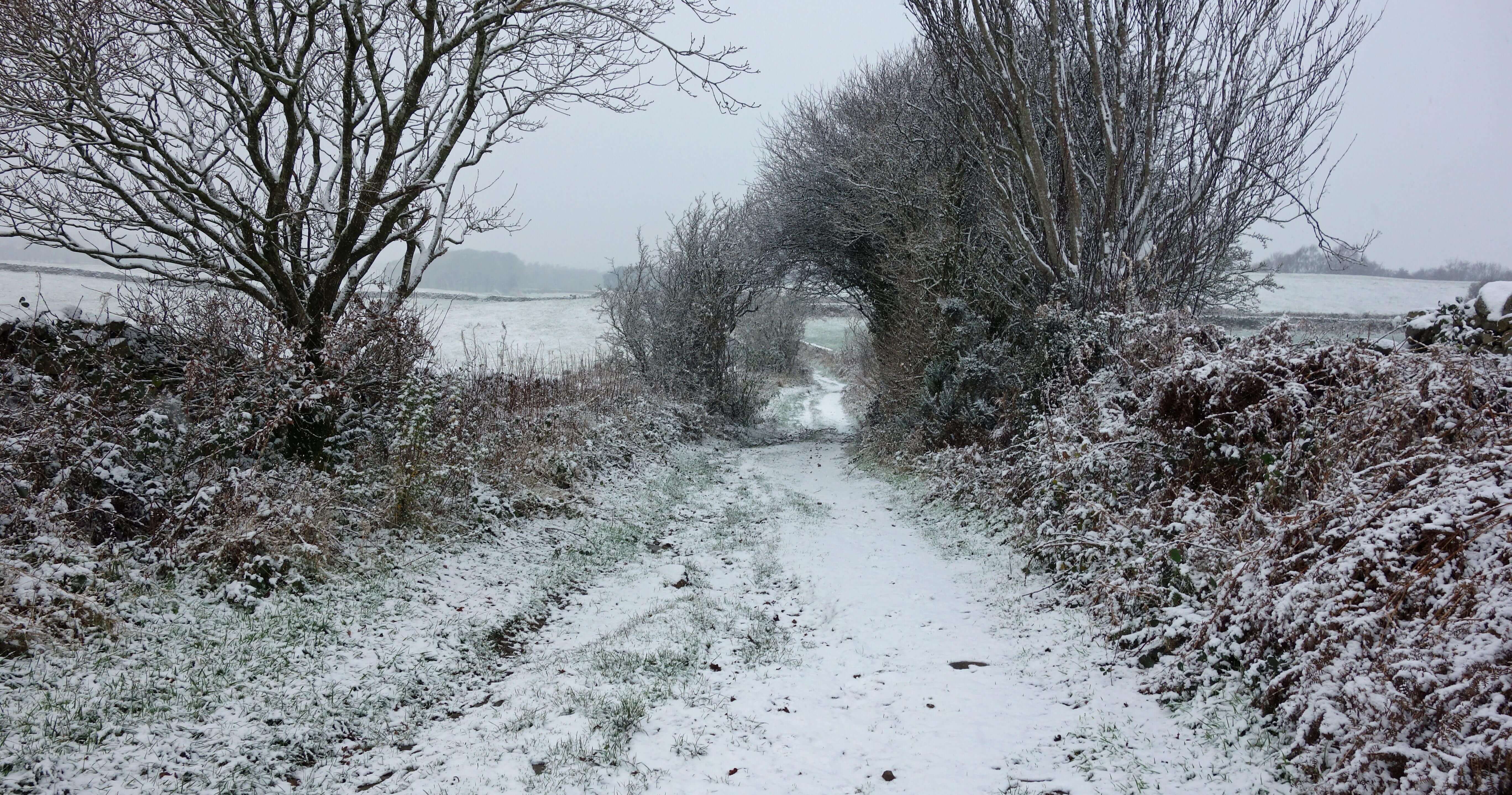 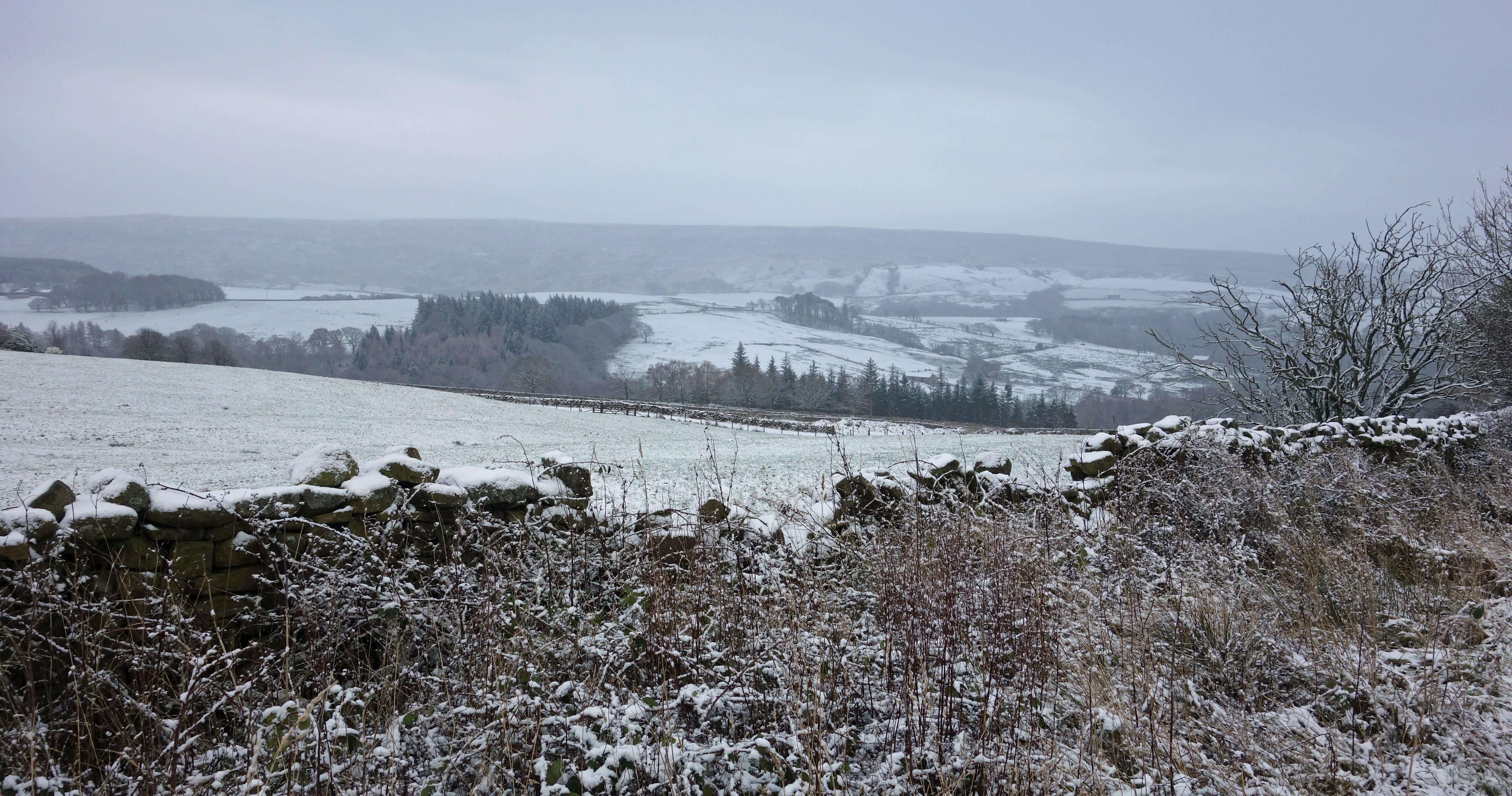 The clouds were still low, preventing much of a view of Wardís Stone and the windmills, and I suppose it was quite gloomy ñ but not to me. On the road down I detoured a little into Roeburndale Road Plantation (which we call Bluebell Wood). It was quite enchanting with snow plastered on all the trees and completely quiet. It is often said that walking in snow is a good time to see wildlife but on this occasion I think it was all hunkering down, unsure how to behave in this novel environment. The sheep were, of course, still in their fields, gamely trying to find grass.

As snow-walking goes, this was a gentle outing. I didnít venture onto the craggy moors, where walking in snow is much more of a challenge. If the snow is deep, walking is slow and tiring. Itís also harder to find oneís way and to avoid hazards and, of course, more dangerous if not properly attired. I will leave that kind of outing for another day, if there is one.

As I continued down Littledale Road, the grey clouds began to disperse. I was, for once, disappointed to see the sun and blue sky. It meant that although the snow would now sparkle in the sunshine it wouldnít do so for long. Indeed, by the time I reached home the snow on the trees was already looking a little soggy. It is the evanescent nature of our snow that makes it appeal. We know that this snow will not lie around and accumulate for months. It was good to enjoy it while it was pristine ñ and to get home with a glow on the cheeks and in the heart.

Looking towards the windmills from near home in Brookhouse