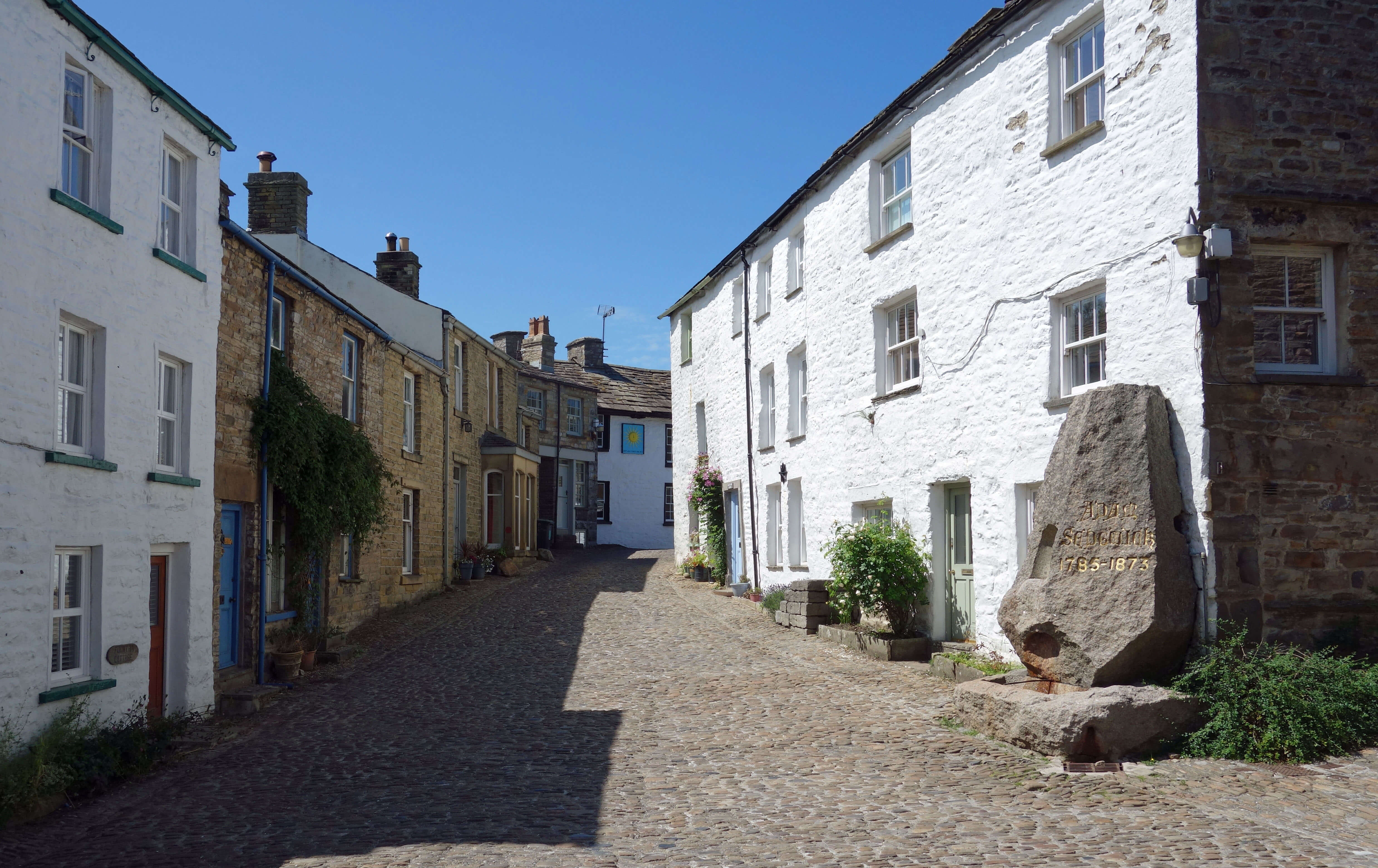 Right: The Sedgwick Memorial in Dent

We walked through the narrow, cobbled main thoroughfare of Dent where a ginormous rock has been placed to make it even narrower. On the rock is carved ìAdam Sedgwick 1785-1873î. There is no explanation of who Adam Sedgwick was or why this memorial to him is placed here. Those who do not know may consult his Wikipedia page, where it states that he was born in Dent and became Professor of Geology at the University of Cambridge.

The Wikipedia page gives details of his illustrious career but says nothing about a document that he wrote in 1868, A Memorial by the Trustees of Cowgill Chapel, that is of more relevance to these notes. He was spurred to write this 122-page pamphlet in the last years of his life ñ in fact, he was so infirm that he had to dictate it ñ by a controversy concerning the re-naming of Cowgill Chapel, which is four miles up the valley from Dent. In 1837 Sedgwick had laid the foundation stone of this chapel, which his sister-in-law had been instrumental in getting built, and he had been a Trustee thereafter. It cannot have been easy fulfilling this role, living in Cambridge, and no doubt his writing of the pamphlet was partly to assuage a feeling of guilt over being unaware that the vicar had sought to have the name changed to Kirkthwaite Chapel, which Sedgwick strongly disagreed with.

I am not interested in the reasons for this dispute or the formal mechanisms by which churches are named or re-named. The pamphlet is more interesting to me because of the ëasidesí within it, where Sedgwick described the changes in the valley since his childhood, to give background to why Cowgill Chapel came to be built and what its role was seen to be. Like most people he had a somewhat rose-tinted memory of his early years although he also mentioned drunken riots, blasphemy, cock-fighting and gambling. He clearly retained a fondness for what he called the ìhonest, warm-hearted inhabitantsî. Most of all, though, he lamented the loss of a ìland of rural opulence and gleeî.

Dentdale was an isolated, self-sufficient ëparadiseí. Almost everything the inhabitants needed was provided within, supporting a variety of trades: farmers, blacksmiths, bootmakers, coopers, tailors, and so on, even wig-makers. However, over the years of Sedgwickís life this all changed, for two main reasons. The Industrial Revolution meant that goods could be produced more cheaply outside the valley and therefore many trades became obsolete and the traders moved away. Secondly, the enclosure acts meant that many landowners became poor rent-paying farmers. In these changes, Dentdale was, of course, little different to all the other dales ñ but none of the other dales has a pamphlet like this documenting the process.

Hartley and Ingilby (1956) says that between 1778 and 1951 the number of houses in Dentdale dropped from 416 to 257 and that many of those that remained were becoming derelict or were being turned into barns. On this walk we set out to see how the farmhouses are getting on today. They are lined out, on both sides of the valley, above the level of the floodplain. Footpaths pass by most of them. So we walked on the north bank by Shoolbred, Scotchergill, Peggleswright (mentioning just some of the names) to Bankland, where we dropped down to cross the River Dee at Tommyís Bridge. All the houses on this sunny side of the valley seemed in fine fettle. (Of course, some old farmhouses may have disappeared altogether.) Few, if any, of them were actively farming. They were homes (or second homes or holiday homes) with excellent views across the green valley to Whernside and Great Coum.

The view towards Whernside

The view back towards Dent, with Middleton Fell behind

We then returned on the south bank by Coventree and West Banks. The houses on this less sunny side were more of a mixed bag: most were in good condition, a couple maybe needed some care and attention, and one was derelict. We passed only two obvious farms, both by the road, as a farm needs to be nowadays. All the houses had private tracks up from the road.

Dent with Rise Hill behind 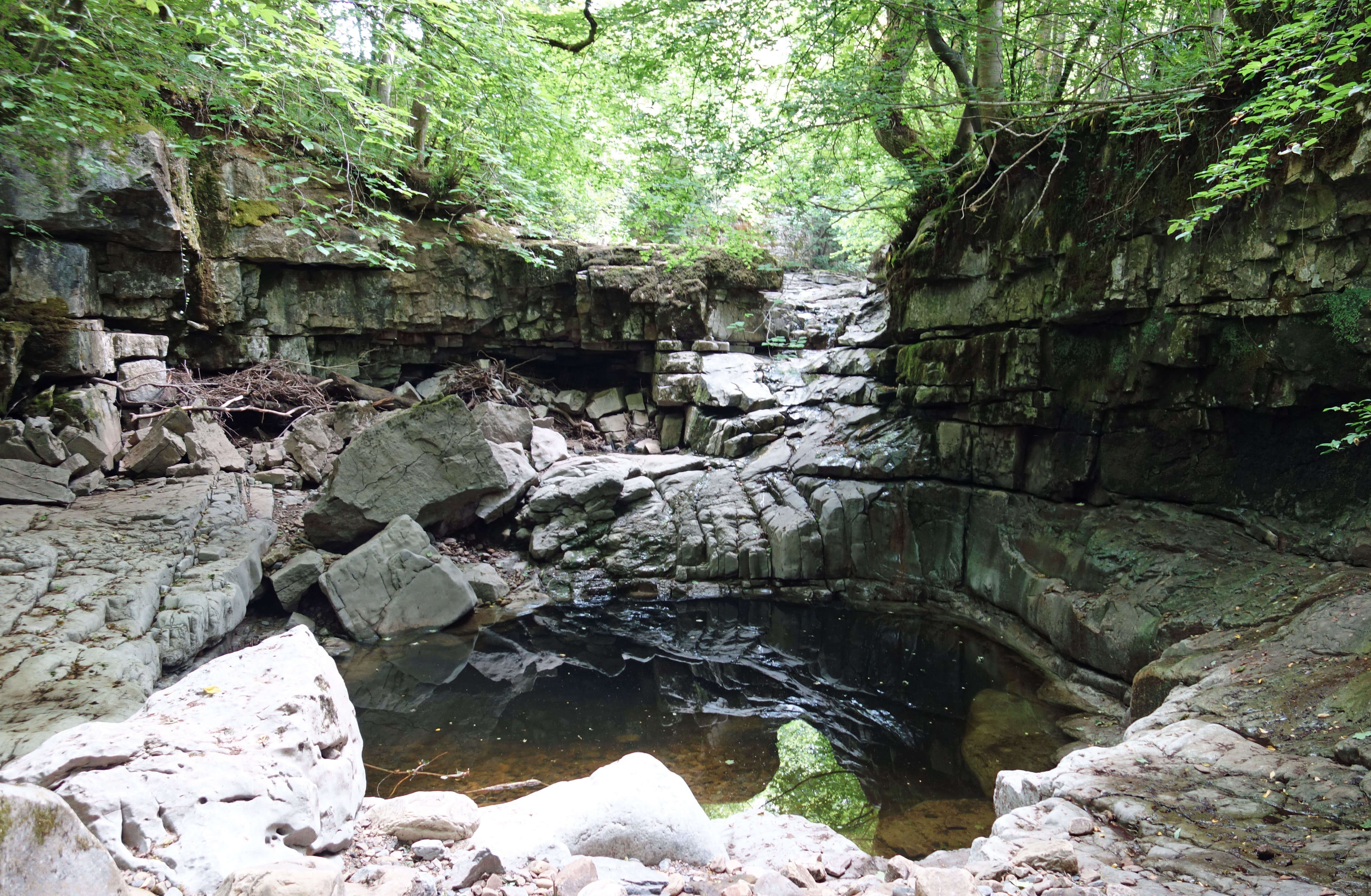 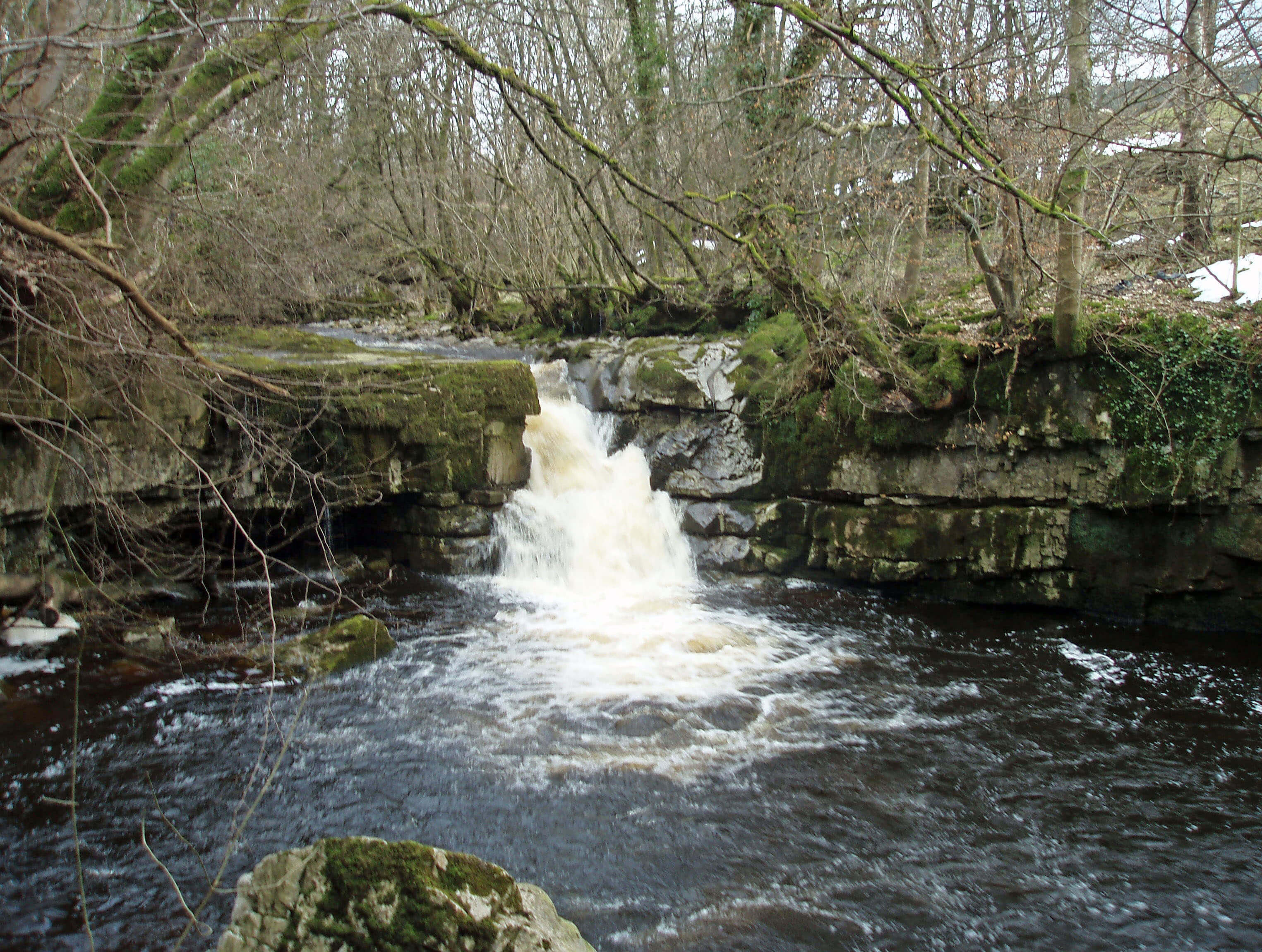 The following morning we continued our tour of the Dent farmhouses from near Ibbeth Peril, three miles up the valley from Dent. There was barely a dribble of water at Ibbeth Peril, where on a previous visit there had been an impressive waterfall into a much larger plunge pool. (A virtual visit into the cave seen to the left of the waterfall can be taken here). The Dee is here flowing over limestone but not if there is so little water that it all disappears through it.

We walked past the remains of Gibbs Hall, now behind a number of cottages, and crossed the Dee at Lennyís Leap. A cuckoo cuckooed, flouting the old rhyme ìIn June I change my tune, in July away I flyî. On the south bank we followed the Dales Way past various homesteads, most in good condition, one or two needing work, and one or two getting it. The conifer plantation that darkened this part of Dentdale is, I'm pleased to say, no more.

At Ewegales Bridge and Lea Yeat Bridge we found that both were being repaired after damage to their squinches. I never knew bridges had squinches. On the road between the two we noticed a building with the sign ìKirkthwaite Church of England School 1866î. It must have been part of the great Cowgill-Kirkthwaite controversy. And then we reached the church that was the cause of all the trouble. It is now called the Church of St John the Evangelist and seemed at peace. Inside the church, which was open to our surprise, there was a memorial to the 72 people who died in Dentdale during the construction of the Settle-Carlisle railway. They are all named, unlike on memorials to those who died at Ribblehead. Nearly half the dead were children, not workers.

After walking up to Dockra Bridge, over Cowgill Beck (which was dry), we continued walking by the farmhouses on the north bank ñ but at Spicegill Farm we had to drop down to the road to get back to the car. We could not find the footpath by Spicegill Farm because it was surrounded by rubbish. By this I donít mean the usual rusty old machinery that accumulates around farms. I mean household rubbish, of the kind which we take to the tip. Spicegill Farm, dated 1678, is one of Dentdaleís many listed buildings. We couldnít tell if it was occupied or not. Anyone prepared to live surrounded by this rubbish is not going to be bothered to keep the house in good shape.

It was a shame to end our tour on such a note. It left some questions. Everybody generates rubbish ñ what are Dentdale residents supposed to do with theirs? Do the authorities know that some of it is tipped at Spicegill Farm? If so, do they care? Itís hardly ëout of sight, out of mindí since itís on a public footpath (or is supposed to be). What can the authorities do about it? Perhaps it serves as a reminder that a paradise like Dentdale does not arise by chance. It requires constant vigilance and work.

The image we prefer to retain, of walking through countless meadows, in this case with Great Knoutberry Hill in the distance


&nbsp138.   Ghosts, Lunatics and Invincibles ñ but no longer
&nbsp137.   Bowness, Empty and Full
&nbsp136.   Green Fields or ëGarden Villageí?
&nbsp...
&nbsp134.   North and South in the Arnside and Silverdale AONB
&nbsp133.   The Limestone Hills East of Settle
&nbsp132.   Three Viaducts and a Tunnel of the Settle-Carlisle Railway