To walk or not to walk? That is a difficult question in these worrying times. When we were advised (March 15) to avoid all unnecessary travel an expert on a BBC question-and-answer session on coronavirus interpreted this to mean that we should not go for walks because we would be bound to come close to other people. Perhaps she was thinking of the streets of London. It is not difficult to stay clear of other people on the hills and moors of North-West England.

The following morning (March 16) a government minister said on the Radio 4 Today programme that ďthose who will soon be asked to stay at home for an extended period would still be able to go for a walk outside Ė itís about being sensible but not mixing in crowdsĒ. However, itís hard to know whatís Ďsensibleí in these unprecedented circumstances. This morning (March 20) the Ramblers (nťe the Ramblers Association) website says that ďOfficial Government advice states that, apart from people who are in households with symptoms or who have pre-existing health conditions that put them at increased risk of contracting COVID-19, going for a walk independently can continue and is an excellent way to maintain health and wellbeing Ė provided independent walkers stay more than two metres from othersĒ.

Setting off, in Roeburndale with Whernside, Ingleborough and Pen-y-ghent ahead

From the cattle-grid on the road on the western slopes of Roeburndale, we dropped down past Backsbottom Farm, crossed the River Roeburn and walked up through the wood to reach the path that runs south for a couple of miles, across pastures and moorland, to Harterbeck. It was a bit late in the year to notice my first skylarks but all the more welcome they were. Nobody can fail to be uplifted by the song of the skylark. Lapwing were gaily whirling about, with their characteristic calls, and curlew, too, were making their bubbling sounds, cherished by all moor-walkers. Curlews have become a red-listed bird recently but they seem to be flourishing on these quiet, small moors.

From Harterbeck we cut across to High Salter, where it must be a harsh life farming at 260m on the fringes of Bowland moors. Here, the so-called Hornby Road stops being a road and becomes a track that continues over to Slaidburn. The Hornby Road is also known as the Old Salt Road. It is assumed that the farm was called High Salter because people used to transport salt and other commodities over this track Ė or it is assumed that salt was transported over this track because the farm was called High Salter. Perhaps it was neither. A Ďsalterí is a deer leap. Plenty of names hereabouts could relate to deer-hunting: Roeburn, Hindburn, Harterbeck, Park House, Cold Park Wood, Bowskill Wood, Huntís Gill, Buckbank Wood. Perhaps High Salter does. 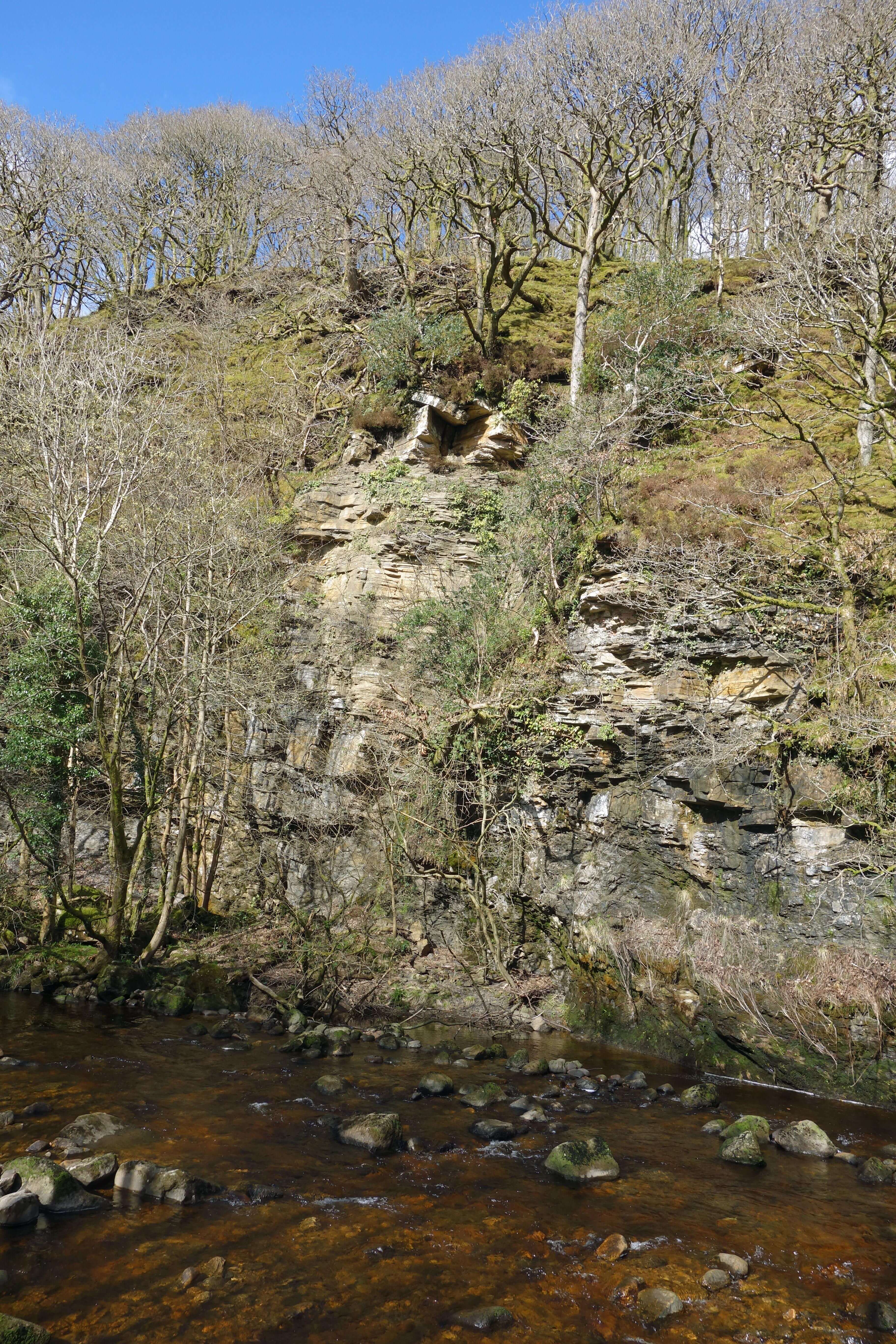 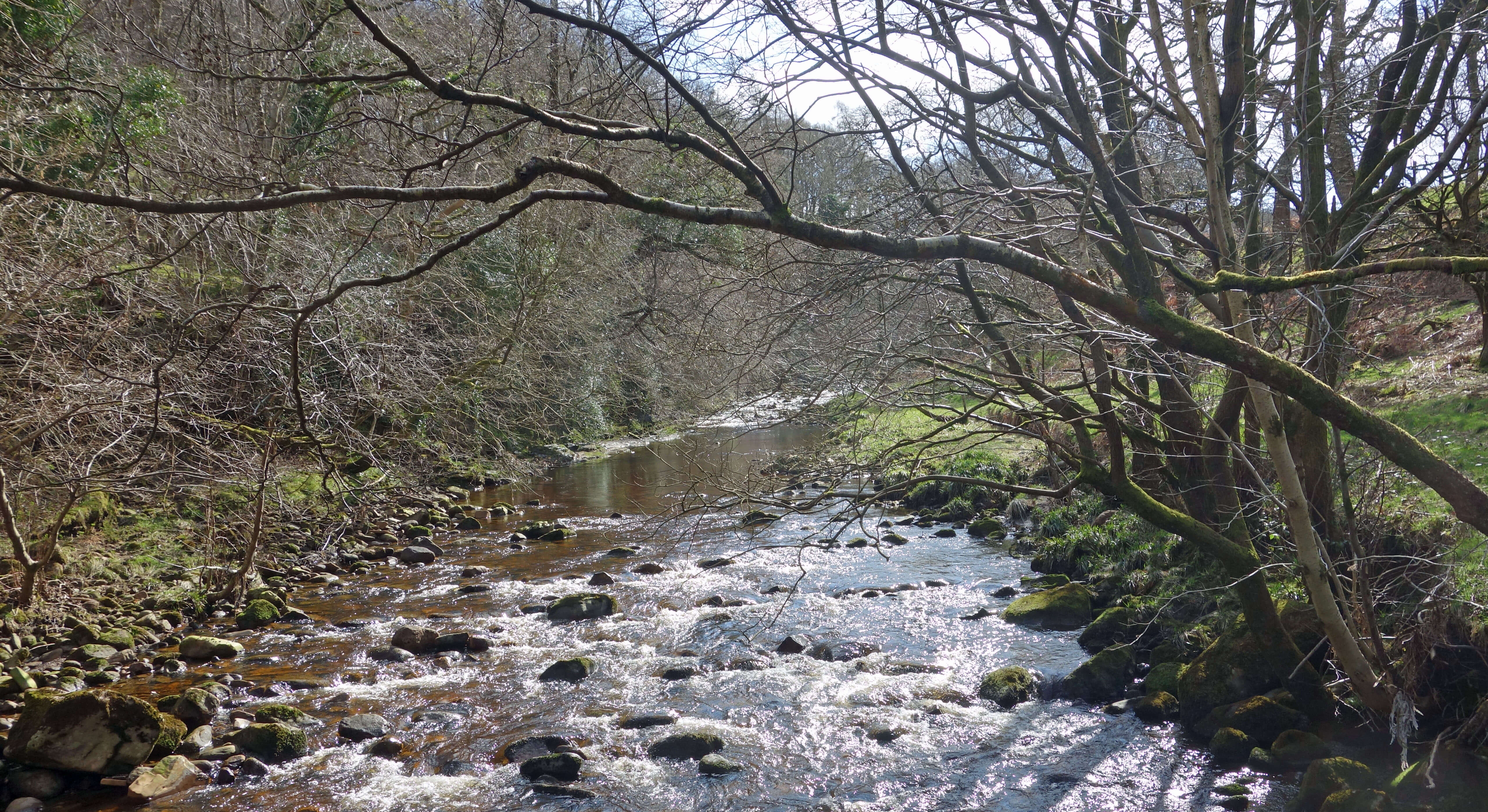 We dropped down past Middle Salter and Lower Salter, past the tiny Methodist chapel, across Barkin Bridge and followed the permissive path into Roeburndale Woods. These woods are one of only nine nationally recognised woods in Lancashire (one Special Area of Conservation and eight Sites of Special Scientific Interest): Artle Dale; Burton Wood; Calf Hill and Cragg Woods; Cringlebarrow and Deepdale; Eaves Wood; Gale Clough and Shooterslee Wood; Red Scar and Tun Brook Woods; Roeburndale Woods; and Thrang Wood (Lamb, 2018). If we include adjacent woodland, Roeburndale Woods is the largest of these, at 92ha.

I expect that it is also the most dramatic (Iím only familiar with five of these woodlands). The woods clothe the steep and sinuous slopes of Roeburndale, within which the River Roeburn flows with, on occasion, a ferocious temper, causing much erosion and damage, such as in the Wray Flood of 1967. Along the length of the woods the underlying rocks give rise to a range of soils that support a variety of tree species, including oak, birch, ash, wych elm, hazel, small-leaved lime and alder. It is pleasant indeed to wind oneís way along the permissive path, in silence apart from the Roeburn below and the birds above.

In the middle of the wood we noticed that a high wire fence was being installed. Its purpose was a puzzle. The bottom few inches of the fence were curled up, presumably to allow small animals to get in and out. Within the fence were some red water dispensers, presumably for whatever large animal is to be fenced within. Surely they are not intending to fence deer in? Or deer out and something else in? Whatever itís for, I assume that itís for a good reason, as such a structure must need approval within a SSSI. Nevertheless, it was sad to see an interference with the apparent naturalness of the wood.

Shortly after, we spotted a roe deer before it sensed us. We watched it for a while, wondering if the freedom that deer have had to roam these woods in the centuries since we stopped hunting them is about to be limited. Of course, the fact that people like ourselves are encouraged to walk in these woods limits their freedom too. It is hard for us to get the balance between support and interference right. I hope that the deer can continue here, which would be more than the red squirrels mentioned in the SSSI citation have managed. I donít think anyone has seen a red squirrel here for many years.

So, overall, it was a soothing walk, on which we could enjoy the exercise, the fresh spring air, and the extensive views, although the thought of coronavirus was never far away. Whatever happens in the coming months, it is to be hoped that such walks remain possible.[*] &nbspHowever, I am not sure that it will be possible or appropriate to sustain the light-hearted tone of these missives. Weíll see how it goes. And of course I wish any readers the best of health.

[*] On March 23 the Government said that we should only leave home for specified limited purposes, one of which was "to take one form of exercise a day". Therefore, for the time being, any walking must be from home.


&nbsp79.   Sand Martins by the Lune
&nbsp77.   Bridging the Lower Little Ribble
A list of all Saunterings so far