There is no definitive list of the dales of the Yorkshire Dales. Some people include tributary-dales, such as Whitsundale; others consider them part of their main dale, Swaledale in this case. Some refer to, say, Malhamdale; others just call it “the Malham region”. The best that I can offer is a list of the top twenty ‘most interesting’ dales, as determined by the number of references to them in the Yorkshire Dales books on my shelf (the number in the right column indicating the relative interestingness): So, a walk around number 17 on the list, Kingsdale, doesn’t promise much of interest. That anticipation would be consistent with the view of Housman (1808, p48) who, in probably the first-ever words written about Kingsdale, described it as having “the appearance of a wild unfrequented desert”. The well-regarded Hartley and Ingilby (1956) book seems to agree, for it devotes less than one of its 300 pages to Kingsdale. Echoing Housman, it asserts that “the whole valley seemed deserted, seldom visited.”

However, for a walker, Kingsdale has an advantage over most of the other dales on the list: it can be walked from end to end and back on a single walk. It is only three miles from its foot at Raven Ray to the farmstead of Kingsdale Head – and five miles to the true head of the dale, at the watershed at High Moss. Therefore, whatever features of interest Kingsdale has may be visited on one walk.

Kingsdale, with Kingsdale Head to the right (photo taken on an earlier occasion)

Moreover, since the dale is virtually straight, it is possible to appreciate the properties of the dale from almost any vantage point. We set off along the track above Raven Ray and could immediately acknowledge the basic geological properties of the dale. Clearly, it is a glaciated valley, with the ice having stripped bare the limestone escarpments on both sides. Interestingly, Housman (1808) seems to be groping towards such an explanation, before the theory of glaciation had been developed, when he writes that “the mountains seem, at some time, to have undergone a sort of anatomical preparation; when the coating of earth or muscular parts have been taken away, and the rocky bones of this huge monster left to the inspection of the naturalist and philosopher”. Raven Ray itself is, it seems obvious, a heap of debris dumped by the glacier. We can easily visualise this barrier causing a lake to form in this wide, flat dale when the ice melted – and then, when the barrier was breached, the lake disappearing over Thornton Force and other waterfalls now on the Ingleton Falls walk. 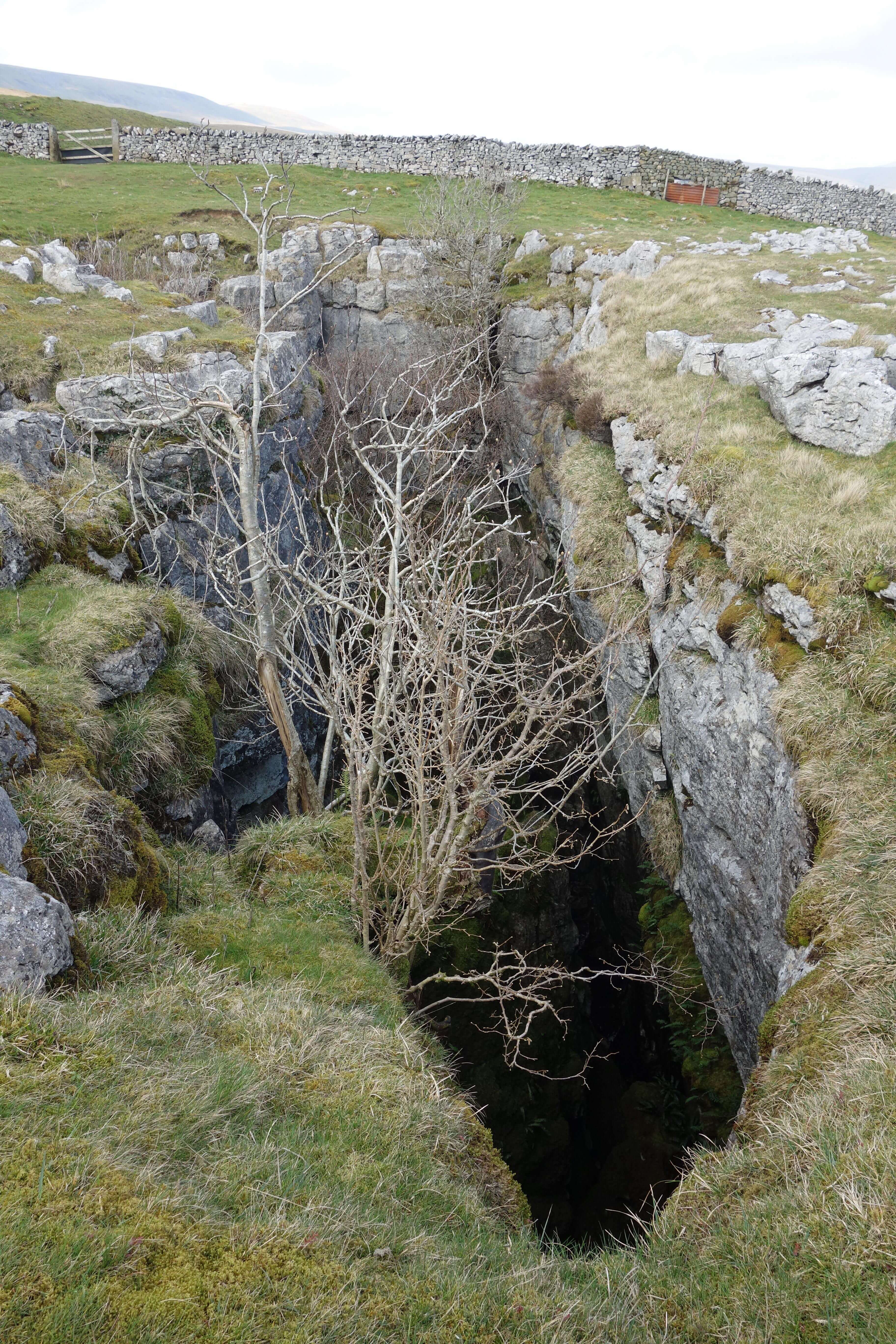 We left the track to follow the wall that heads north to Whernside. Looking east to Ingleborough, it seemed that the limestone pavements of Twisleton were continuous with the pavements above Raven Scar on the western slopes of Ingleborough, with the intervening valley of Chapel-le-Dale having disappeared. At West Fell we dropped down into Kingsdale to have a look at the Apronfull of Stones. Of course, today the Apronfull just looks like a large pile of stones, with a recent wall to protect it from being washed away by the beck. It is only the knowledge that it is 4,000 to 4,500 years old that gives pause for thought. And we might pause a bit longer to contemplate the fact that an excavation of a pit nearby found charcoal dated to about 8,750 years ago (Johnson, 2008, p104).

Next we crossed the beck, which was not difficult since it was completely dry, to have a peek in Yordas Cave, a cave that fascinated early visitors to the dale. From there we found the Turbary Road (the permissive path marked on the map didn’t help). Turbary is (or was) the legal right to collect peat. The Turbary Road is a well-made track – but was it well-used for the purpose of turbary? I couldn’t see any signs of where peat had been collected, although I suppose it is many years since it was.

Today, the track is mainly used by walkers to provide a safe route past various pot-holes, such as Rowten Pot and Jingling Pot, some within a footstep of the track. It is good that the pot-holes are left as they are, without warnings or fences. However, I wouldn’t take children with me along this track unless I didn’t mind losing one or more of them. Since a high proportion of the few visitors to Kingsdale are intending to go down these pot-holes, it is perhaps not the case, as I implied above, that all the interesting features of Kingsdale can be seen from any vantage point. Whether there is much of interest underground I cannot say. We only peered over the edges to see the depth of the abysses and, sometimes, the waters that could be heard below. It is a strange sort of desert that has water gushing underground.


&nbsp48.   With The Grane
&nbsp46.   To the Point of Winterburn Reservoir
A list of all Saunterings so far