The Conder is an unassuming river, most of the time. It arises on Black Fell, below Clougha Pike, and runs inconspicuously, never more than a few feet wide, for about eight miles through what nobody has ever called Conderdale. This is a surprisingly broad valley, there being over two miles between Clougha Pike and the Langthwaite hills on the opposite side. After its initial spurt off Black Fell, the Conder declines gently towards the coast, with no waterfalls or other excitements along the way. It ends not by boldly entering Morecambe Bay of its own accord but by sidling into the River Lune at Conder Green, just before the Lune enters the bay.

An iffy forecast for later in the day led me to begin my walk before sunrise, setting off from Glasson marina and aiming to walk up beside the Conder to its source (and then home). The path along the old railway line to Conder Green was icy and required attention that might otherwise have been directed towards identifying the birds stirring in the dark estuary. A bright white little egret was all that I could discern. The tide was out and the Conder ran low below its muddy banks towards the Lune. As I made my way to the Glasson spur of the Lancaster Canal the sky evolved through oranges and purples. In its own good time the sun arose over the Bowland hills but, alas, within ten minutes it disappeared behind a bank of cloud, where it hid for the rest of the day ñ which wasnít what had been forecast.

The canal here is banked up above the level of the Conder, which meanders unseen in the fields to the left. I continued north on the canal mainly to see the River Conder flowing under it. Itís an odd juxtaposition ñ a flowing river crossing a still canal. I followed the path of the Conder through the village of Galgate, for the residents of which I added that ëmost of the timeí to my first sentence. The Conder floods the village with depressing regularity. Here the river passes through a fairly narrow channel within high walls and, of course, most of the time it flows harmlessly enough. However, the Conder has a large catchment area for such a normally docile river and if thereís a cloudburst on the Bowland fells then, as there is little to detain it, the water must rapidly fill this channel.

North of Galgate, at the hamlet of Ellel, I took a footpath east. The Conder protects its privacy by having no public footpaths anywhere on its banks except here ñ and this short footpath passes under the M6, so it hasnít much appeal to walkers. Disappointingly, the cloud was now dampening what little colour there was on a December morning and, with the Conder inaccessible and hidden away down to the north, I settled in for a spell of road-walking.

At the corner of Long Lane the OS map marks an ëOld School Houseí but the plaque says itís the old schoolmasterís house, which seems more plausible given its isolation. Did the schoolmaster teach his pupils to split the word th
e over two lines, as on the plaque? Long Lane was not as quiet as might be expected, with various workmen wandering about. Our utility services think that this valley deserves to be cluttered with enormous pylons, large reservoirs (on the Langthwaite hills) and fenced-off constructions. A view of Clougha Pike was somewhat obscured, as the photo shows. 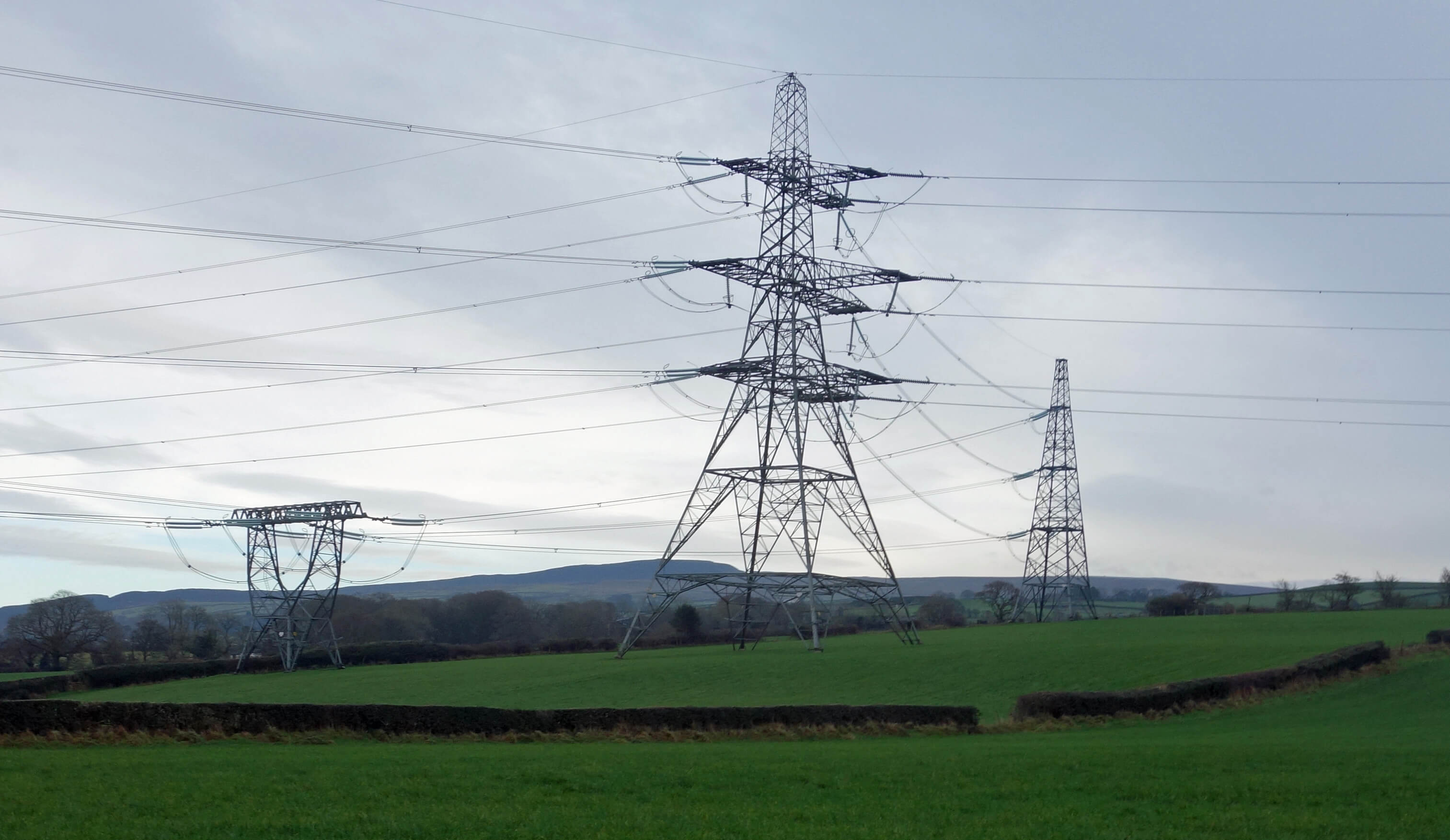 Halfway along Long Lane I cut down to Conder Side Farm. I felt a duty to see anything that had ëConderí in its name. Sure enough, the farm was beside the Conder, which I crossed by a nondescript bridge. I continued east and then dropped down from the other side to Conder Mill, which with a mill pond and a scheduled bridge is a pretty setting (when in sunshine). Just above Conder Mill the Conder is joined by its largest (but still not large) tributary, Rowton Brook.

After walking through the village of Quernmore and past the isolated St Peterís church I crossed the Conder again, now quite diminutive, by a bridge that nobody passing on the road would notice as a bridge. Here I needed to swing east because the Conder flows from what looks like a side valley, with the main valley north having no significant watercourse. An explanation for the width of the valley, and the fact that the Conder seems much too small for it, may now be appreciated ñ the River Lune once flowed through here before it was diverted towards Lancaster by glacial deposits.

Passing the peacocks at Cragg Cottage and crossing the Conder again, I entered the Bowland Access Area near Cragg Wood. This wood, known in particular for its old sessile oaks, is one of only four Special Areas of Conservation (SACs) in Lancashire. It is, however, private land. After too much road-walking my boots welcomed the rather rocky and muddy track through heather above the Conder and also enjoyed their first walk of the winter in snow, albeit only the soggy remnants of the snowfall of a few days ago.

Now, at last, I reached the source of the Conder ñ or as close to it as you can reasonably expect after the long trek from Glasson. The true source, of course, lies higher up the slopes of Clougha but I was content to see it gushing down through a small ravine and then swerving off west whence I had come. I crossed it for the ninth and last time, taking only a single step to do so. A few yards further on I walked by Sweet Beck, which flows north to join the Lune. It is strange to think that apart from those few yards the land between the Conder and the Lune is entirely surrounded by water ñ it is almost a sort of island. But something similar can be said about any watershed.

Unfortunately for my legs I still had a couple of miles to go to get home but as far as the River Conder was concerned, that was it. I said at the beginning that it is an unassuming river and I am tempted to add, paraphrasing Churchill, that it has much to be unassuming about ñ but that would be unfair. The river and the valley are not at their best on a cold, grey day. Me neither.


&nbsp71.   Low in Low Barbondale
&nbsp69.   Lakeside, Finsthwaite Heights, Rusland Heights and Tourists
A list of all Saunterings so far