Kentmere Tarn is unique in the Lake District in three ways. First, it is the only body of water in the National Park that is both a mere and a tarn. At least, I cannot think of anywhere else that has both ‘mere’ and ‘tarn’ in its name, but I stand to be corrected. If the name ‘Kentmere’ referred to a ‘mere’ then it can only have been this one, as there are no others in the valley apart, now, from the reservoir built in 1848. For my first sight of Kentmere Tarn I walked from Staveley on the open lanes and tracks on the eastern slopes, rather than on the dark, enclosed road by the River Kent, and scrambled up Millrigg Knott. The becks on the way were refreshingly alive, stirred into action by the first real rain for months, and as I stood at the Knott I could see that more rain was falling on the tops to keep the becks lively.

Kentmere Tarn’s second unique property is that it is the only tarn to have disappeared and then reappeared in a different place. This story may be told through the comments in contemporary guide books. Otley (1823) wrote that “Kentmere Tarn, bordered by morass, and Skeggles Water … are neither of them possessed of any striking features.” Ford (1839) said that “Kentmere Tarn … is one mile long, and cannot be approached except at one point, owing to the swampiness of its margin.” So, in the early 19th century a boggy Kentmere Tarn existed. However, Martineau (1855) said that a visitor “will look for Kentmere Tarn and wonder to see no trace of it. It is drained away; and fertile fields now occupy the place of the swamp.” Baddeley (1880, 1922) wrote that “many people, on entering the valley, will ask, why Kentmere? … There is no mere at all.” Martineau and Baddeley knew why there was no tarn (or mere). In about 1840 a channel had been dug at its foot, so that the waters would drain away to leave good farming land where the tarn was. Or so it was hoped. The land, however, gradually returned to bogginess.

I could not appreciate this from Millrigg Knott, so I pressed on to Kentmere village, past the prominent, damp-looking St Cuthbert’s and various isolated homesteads, some looking less naturally integrated into the hillside than others, and up towards the Kentmere Hall pele tower, currently under repair (isn’t it always?). The path on the western side of the tarn is disappointingly separated from it. The tarn seems to be reserved for anglers and it is impossible to see it at close quarters without trespassing. It looked surprisingly deep.

The village of Kentmere 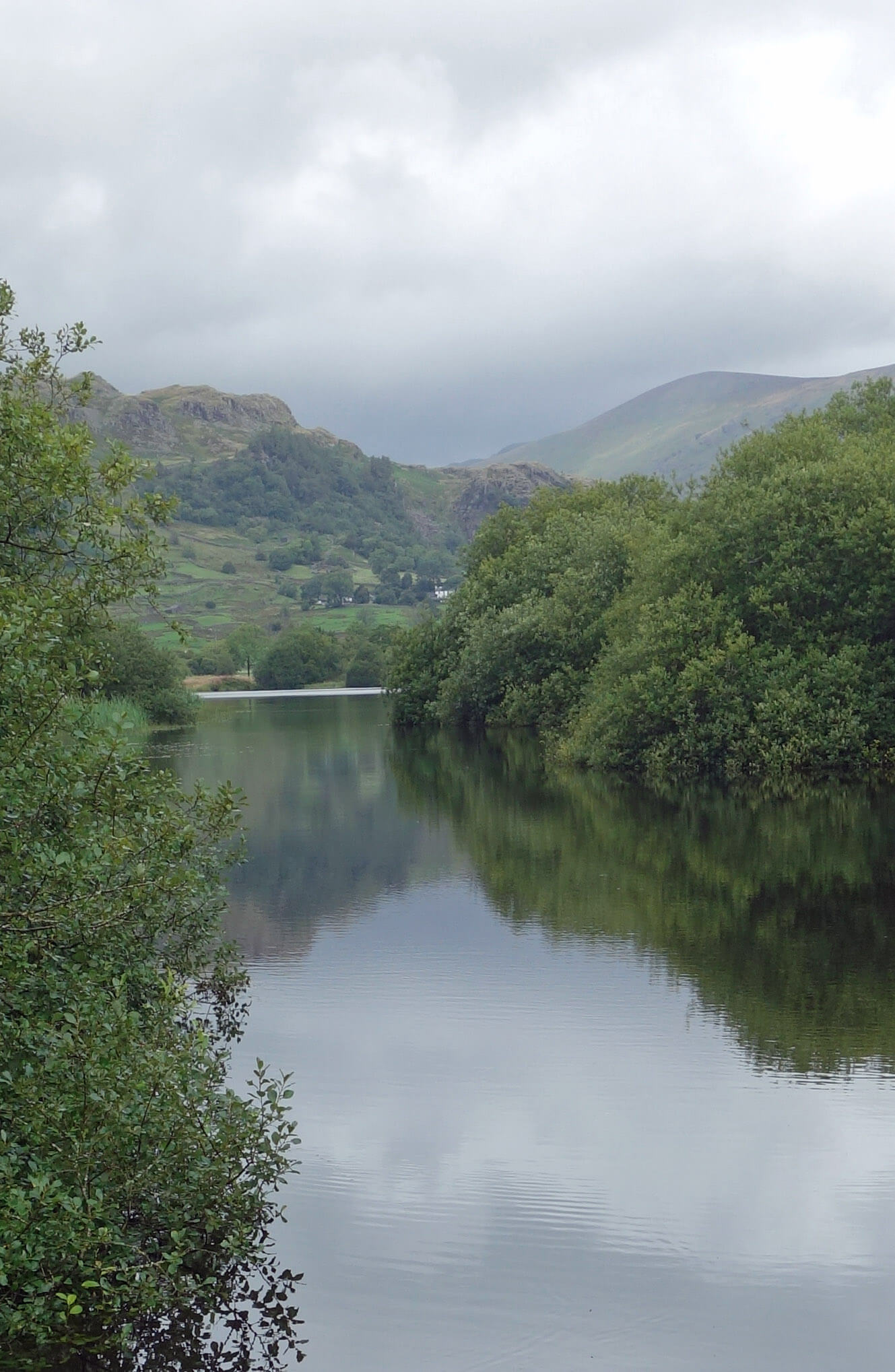 The land would no doubt have continued to become boggier after the failed attempt to drain it but for the discovery there in the 1920s of diatomite. I had assumed that diatomite was a kind of rock, on the basis that most things ending in –ite are rocks. However, the Gregory (2000) history of the extractive industries of Kentmere tells me that “the material consists of the microscopic skeletons of water-plants, as many as 60 million to a cubic inch, which flourished in clear cold water at the end of the Ice Age. It has remarkable insulation properties, especially for very high industrial temperatures when calcined and ground, and it has other uses as an inert filtration medium, for industrial filling and polishing, and in the manufacturing of explosives.” This diatomite is therefore much younger (at 12,000 years) than the volcanic and sedimentary rocks (at 300-500 million years) that form central Lake District. Is 12,000 years long enough for a sediment to become rock? Probably not, as I see that the material is sometimes referred to as diatomaceous earth.

This diatomite was valuable enough to be mined, or at least scooped, from what had been the bed of the old tarn. So, that’s the tarn’s third claim to fame: it was the site of England’s only diatomite works. This prompts the question: why? Why was diatomite formed only here? Or does it in fact exist in other tarns and lakes? If it does then why wasn’t it mined there too, since, according to Nicholson (1977), diatomite had become “commercially the most important deposit still being worked in the inner Lake area”? At its peak, the annual production was 10,000 tons (Gregory, 2000).

However, the diatomite extraction became uneconomic, as is the fate of all mines, and the Cape Asbestos Company abandoned it in about 1980. The old work-site has not been abandoned. There are now large green warehouses, with signs in five languages, and warnings not to take photographs. It had not occurred to me to take photographs of large warehouses but now I was tempted. There was no sound of activity. It seemed rather mysterious. I understand that the owners, Hollingsworth & Vose, make “synthetic electrostatic non woven materials for air filtration” but I don’t know why they make them in this out-of-the-way location.

So, upstream of Hollingsworth & Vose, nature has reasserted its claim to what was always a boggy area and is even more so now, after up to 10,000 tons a year have been extracted. And so Kentmere Tarn returned. It is now thinner and a bit further north than it was in 1800 – but I expect that it is still working on it.


&nbsp24.   Up Ingleborough with the Holiday Crowds
&nbsp22.   In the Lancashire Yorkshire Dales
A list of all Saunterings so far