To visit Blackpool on a February morning is to see an ungarnished Blackpool. There are no sunbathers on the beach; no illuminations; nobody on the roller coasters; no marauding hen-partyers. It is a time to appreciate the core, the essence, the heart of Blackpool, undistracted by the garishness for which it is renowned. It is unnecessary to write with the customary condescension about Blackpool’s remarkable success as a tourist resort, quoting with disdain and astonishment various statistics, such as that if all the chips eaten in Blackpool in one year were laid end to end then that would be a waste.

From the station I walked to the North Pier and passed Blackpool Tower, the tallest structure in Britain when it was built in 1894, and a place called Vegas Diner, which made me wonder what happened to those proposals that Blackpool become the ‘Vegas of the North’ with a ‘super-casino’. (Checking later, I see that the government dropped the idea in 2008 but they had opted for Manchester anyway.) I walked on to the recently-redesigned esplanade with curving terraces overlooking the beach, with tall, thin, black, spermoid poles, bending in the wind seeking celestial ova.

I do apologise. I had intended to not lower the tone. Since almost everything was closed, I wasn’t going to mention a museum of curiosities, personalised rock, Gypsy Lavinia (“the answer to all your problems”), foot-long hot dogs, Dr Fryte’s Freak Show, artisan ice-creams, and weprintanyhood.com. I would instead admire the sea and the beach. The waves were far distant and the beach looked somewhat wet, dark and bleak, but not so much that it deserved no people at all. 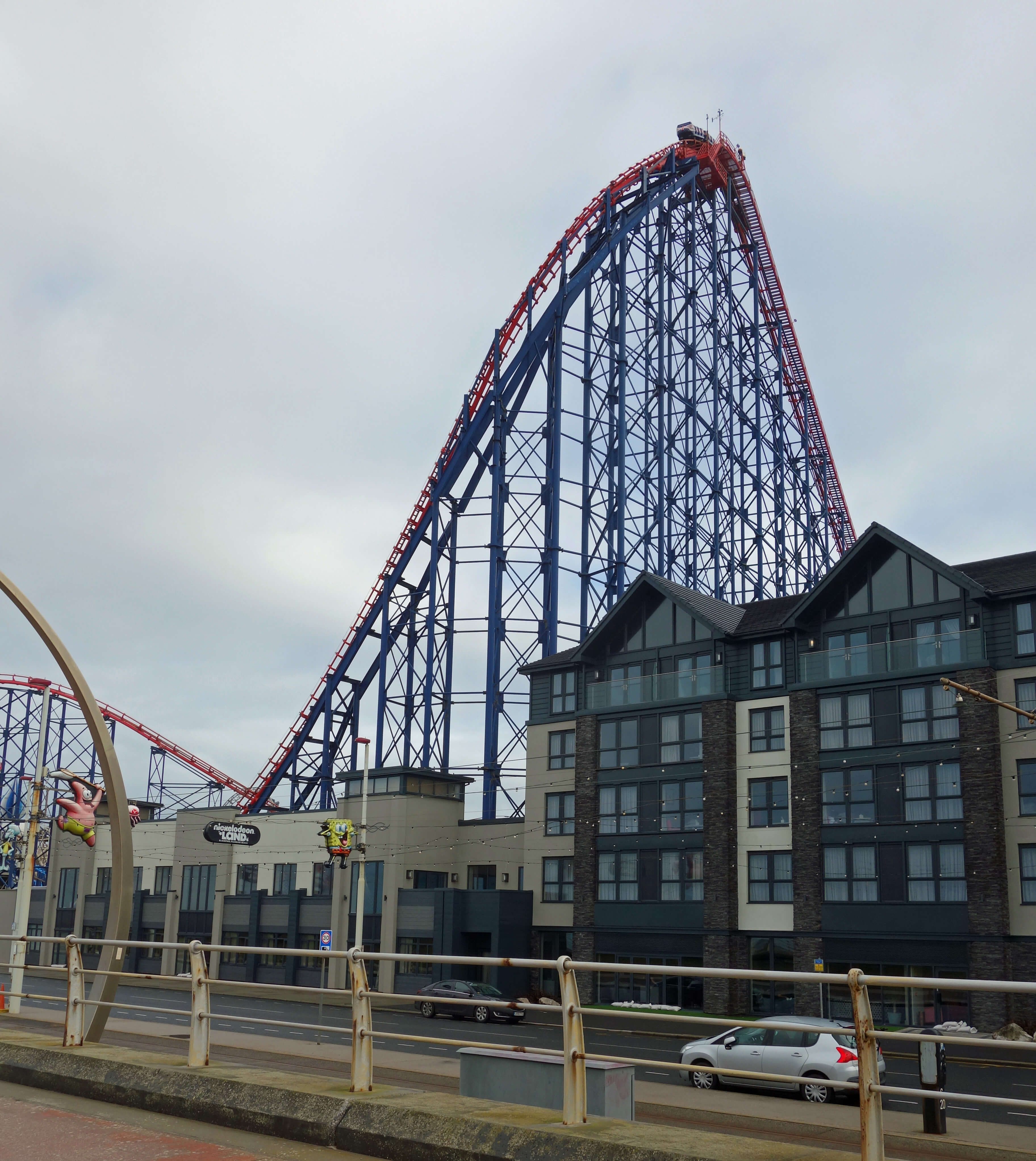 Eventually, the tourist glitz, such as it was, faded away, to be replaced by hotels and guest houses, from one of which a man emerged, blinking, exclaiming “… summer's day, mate!”, which no doubt it was compared to the preceding days when Blackpool was storm-battered, judging by the sand and seaweed strewn about the promenade. This evolved into a high sea wall, from which the exits to the beach were closed, for some reason. Near the South Pier, tourism has another flourish, with the Pleasure Beach, which is not a beach. It is an amusement park, attracting over five million customers a year, but very few, if any, on the day I walked by. The Big One – the highest and steepest roller coaster in England (shown left) – appeared asleep, until I heard a train trundling up to the top and then rattling down. However, there seemed to be nobody on it. Perhaps it was a ghost train.

The sea wall came to an end at a stretch of sand dunes. I continued south by the A584 (Clifton Drive North) behind the dunes, or rather between them, as dunes like to blow inland. A sign said that I was entering St Anne’s-on-the-Sea, a name that doesn’t appear on today’s OS map. One might assume that this indicates that an old village of St Anne’s rather resents being tagged onto the end of Lytham St Anne’s, now that it is has merged with Lytham. However, an online map of 1847 shows no St Anne’s but does show a Lytham larger than the then tiny Blackpool. St Anne’s was a planned town, founded in 1875.

To the east, a new housing estate called itself Coastal Dunes, named after what it is has replaced, as is the custom. Further along, a section of the easterly dunes has been left as a Site of Special Scientific Interest, but it cannot be entirely natural, being separated from its mother dunes by the A584. The first house after the SSSI was, I noticed, numbered 553, indicating that I had far to go to reach the centre of Lytham.

I left the A584 to walk on the seaward side of the dunes, where I found two lines of posts about ten metres apart, marking, I assumed, where we are supposed to walk. The path was patrolled by an army of walkers, all with a dog and some with several. The sand/mud glistened towards distant waves that were surprisingly noisy. St Anne’s Pier and nearby attractions – boating lake, putting course, miniature train, crazy golf, trampolines, gardens – were, of course, genteel compared to what I seen earlier.

I noticed that the map shows a large empty area inland so I went to have a look, passing many grand residences, all built of red brick with white/cream embellishments, including one that insisted that it was St Anne’s Library. Lytham was still signposted ahead. I reached the empty area, which turned out to be a rolling park with copses, sand-dunes and grassland. A number of people were wandering about, in ones and twos and threes and fours, with some of the more elderly easing about in buggies. How commendable to provide such a leisure area within the metropolis!

The area was, however, protected by barricades, no-entry signs and high wire fences. I could see a couple of park-walkers limbering up, an activity intended to make the limbs limber. This involved using a large stick to swing the limbs in an exaggerated fashion. There is a species of walker (who consider themselves psychogeographers) who are inclined to toss a coin at street corners to generate a random walk about a city. Similarly, these park-walkers hit a little white ball in a random direction and then walked towards it, and so on. They didn’t carry their rucksacks on their backs but pulled them on wheels, which seems an excellent innovation that I must try on Striding Edge. I also noticed that every so often the park-walkers would perform a mysterious balletic manoeuvre, raising one leg behind, bending and extending one arm to the ground. I understand that the Rider Cup has been held on this park. I didn’t notice any horses myself but I could see that it was excellent terrain for riding. I thought that I’d go for a walk around the park but I read that it is Ł200 around, which seemed rather steep, what with all the white balls flying about. 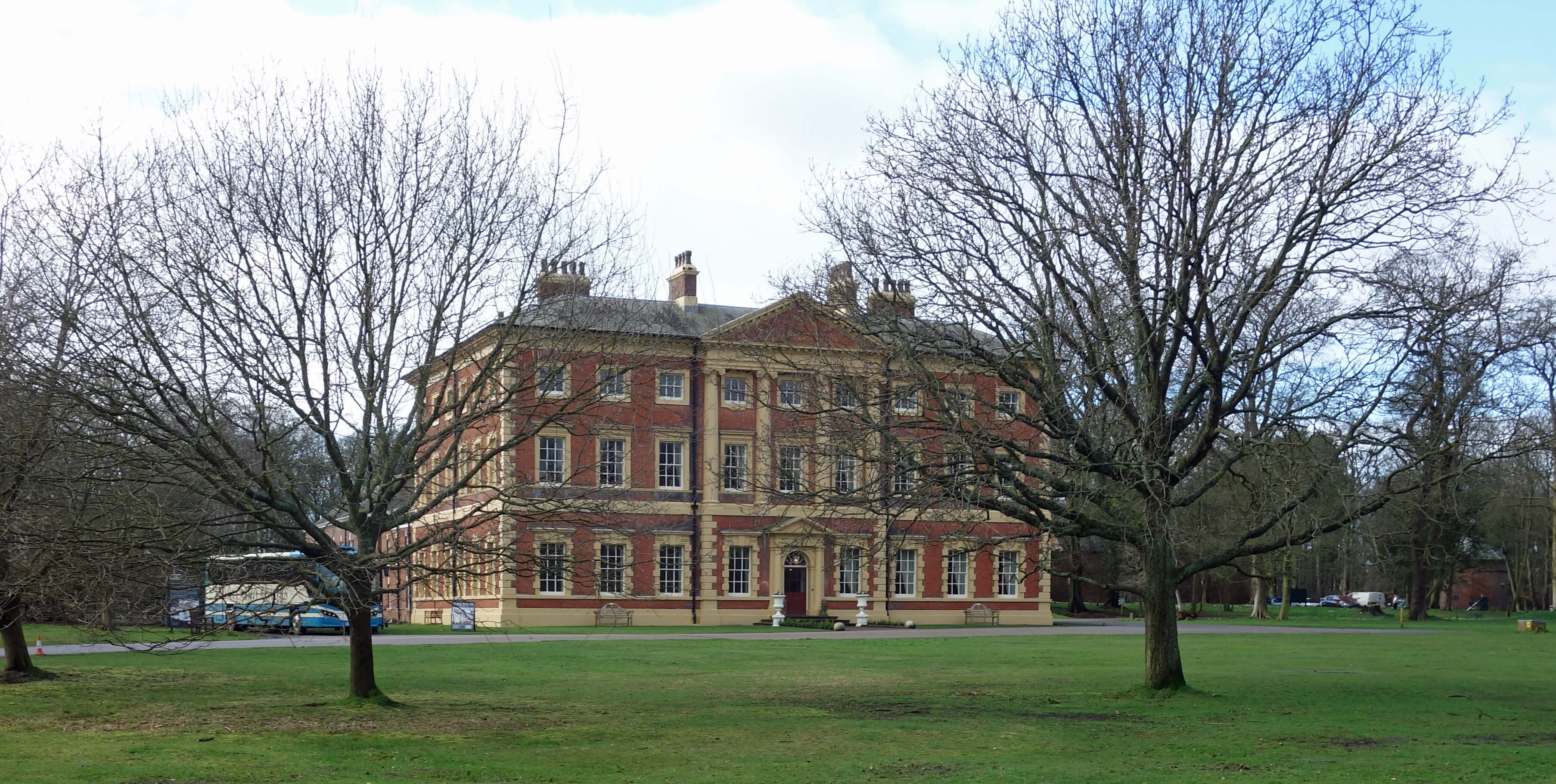 I walked through suburbs and snowdrops to Lytham Hall. The first sentence of the Lytham Hall website states boldly that it “is the finest Georgian house in Lancashire”. Even those who don’t know what other Georgian houses there are in Lancashire will be impressed, as no doubt they should be since it is the only Grade 1 listed building in Fylde. It was built in 1764 in the Palladian style to replace the manor house of 1606. Like other grand houses hereabouts it is red brick and creamy, but grander, being an imposing cuboid of symmetrical design. I sadly admit that I found it rather conventional, with no external features of any inspiration or idiosyncrasy that might lead me to encourage anyone to visit in order to see them.

The manor house and hall were the home of the Clifton dynasty. I invariably find that I’m more interested in the later than the earlier members of a dynasty. The early ones are always worthy souls (Sirs, Barons, High Sheriffs, MPs, and the like) of power, prestige and wealth sufficient to build the piles that befit them. The later ones are usually reprobates who have found that they cannot maintain their halls in the manner to which they have become accustomed and therefore, in a final blaze of inglory, splurge whatever wealth remains.

The last Clifton gentleman to live in Lytham Hall was Henry Talbot de Vere Clifton (1907-1979), who called himself Harry, which immediately shows that he lacked the necessary commitment to upper-class toffiness. Wikipedia describes him as a “dilettante film producer” (though nobody knows what films he produced) who “squandered much of the family’s wealth”. Perhaps he inherited the standards set by his father, John Talbot Clifton (1868-1928), described by Wikipedia as “colourful”, which I suppose is one adjective to describe a man who travelled the world to shoot wild animals (especially rare ones that thereby became rarer) and to eat them. Perhaps he took a knife and fork, as well as a gun, on his expeditions so that he could tuck in straightaway, thereby becoming full of colour, red.


&nbsp75.   To Ward's Stone: A Classic Walk?
&nbsp73.   The Raygill Foraminifers
A list of all Saunterings so far