62. &nbspOn and Off the Ingleton Waterfalls Trail

After all the recent rain I thought Iĺd look at some waterfalls, and the Ingleton Waterfalls Trail provides the best set of them in North-West England. They cost the most to see, so they must be the best. People have been paying to see the Ingleton waterfalls since 1885. In the early years people swarmed here on the train from places such as Leeds and Bradford to walk up by one subset of waterfalls and down by the second subset. They found that they were charged twice, to their displeasure (Humphries, 1985). There is no such problem today.

I walked, as did the early visitors, from the railway station ľ now an information centre and bus-stop ľ down to where the two tributaries merge, near the old railway viaduct, to form the River Greta. The tributaries are called the River Doe and the River Twiss but there is confusion as to which is which. I prefer to use neither name and to continue the names of Chapel Beck (from Chapel-le-Dale) and Kingsdale Beck (from Kingsdale) down to the merger. There can be no confusion about those names.

Ingleborough from Oddies Lane, with Ingleton Quarry in the middle distance. (We should not turn a blind eye and a deaf ear to Ingleton Quarry. Most descriptions of this region paint it as a peaceful idyll but the sight and sound of the quarry does intrude. It is not oppressive but we should not pretend it isn't there.)

I continued up Oddies Lane between the two becks in order to better appreciate the open views and then dropped down to join the Trail near the footbridge that crosses Chapel Beck below Snow Falls. There was plenty of brown-stained water gushing down but not as much as I had expected. I passed Snow Falls, the view of which is rather distant, and a series of smaller falls and deep pools within the wooded glens up to Beezley Falls but the most impressive feature was the narrow Baxenghyll Gorge, through which the beck flowed dark and deep, far below the viewing bridge. 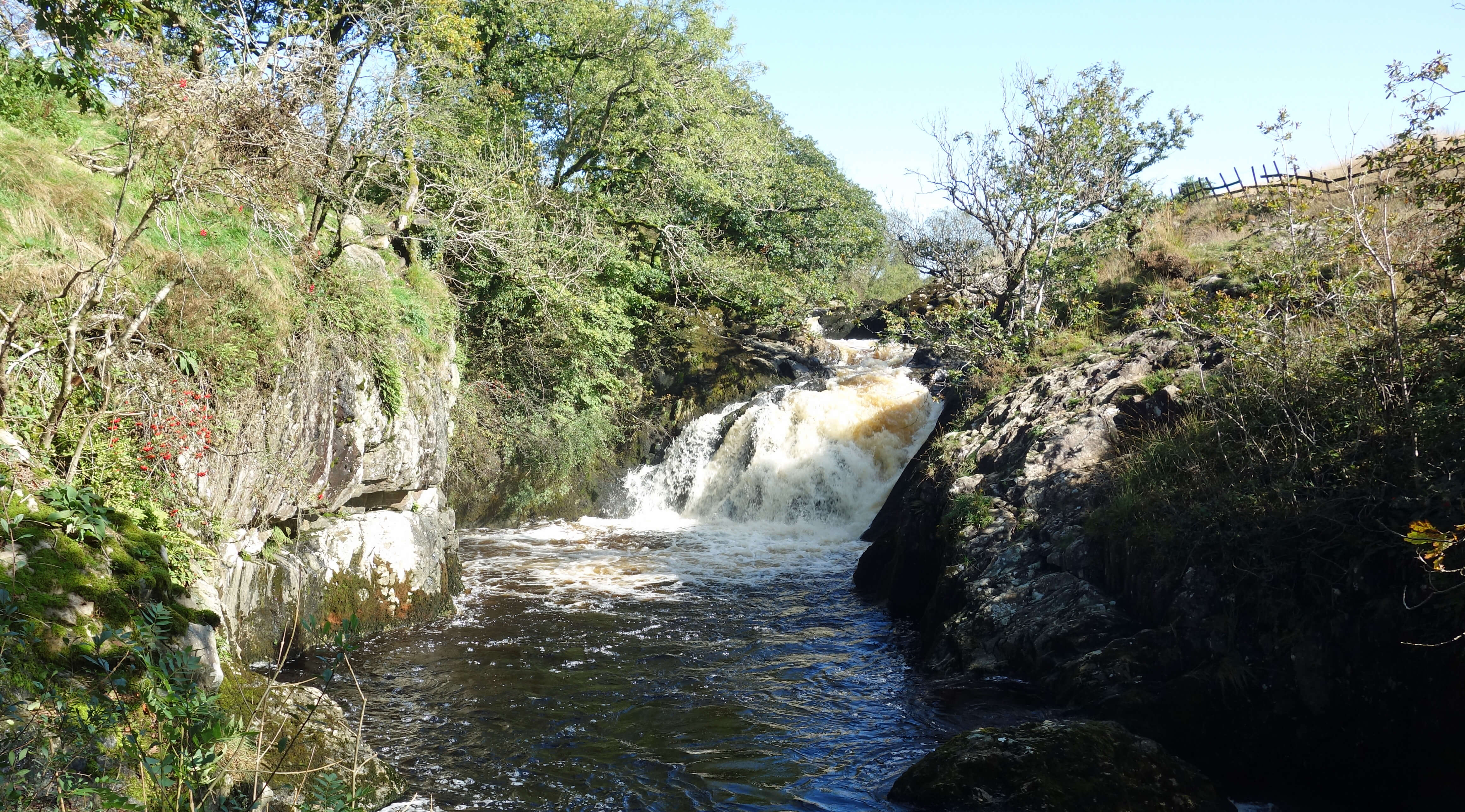 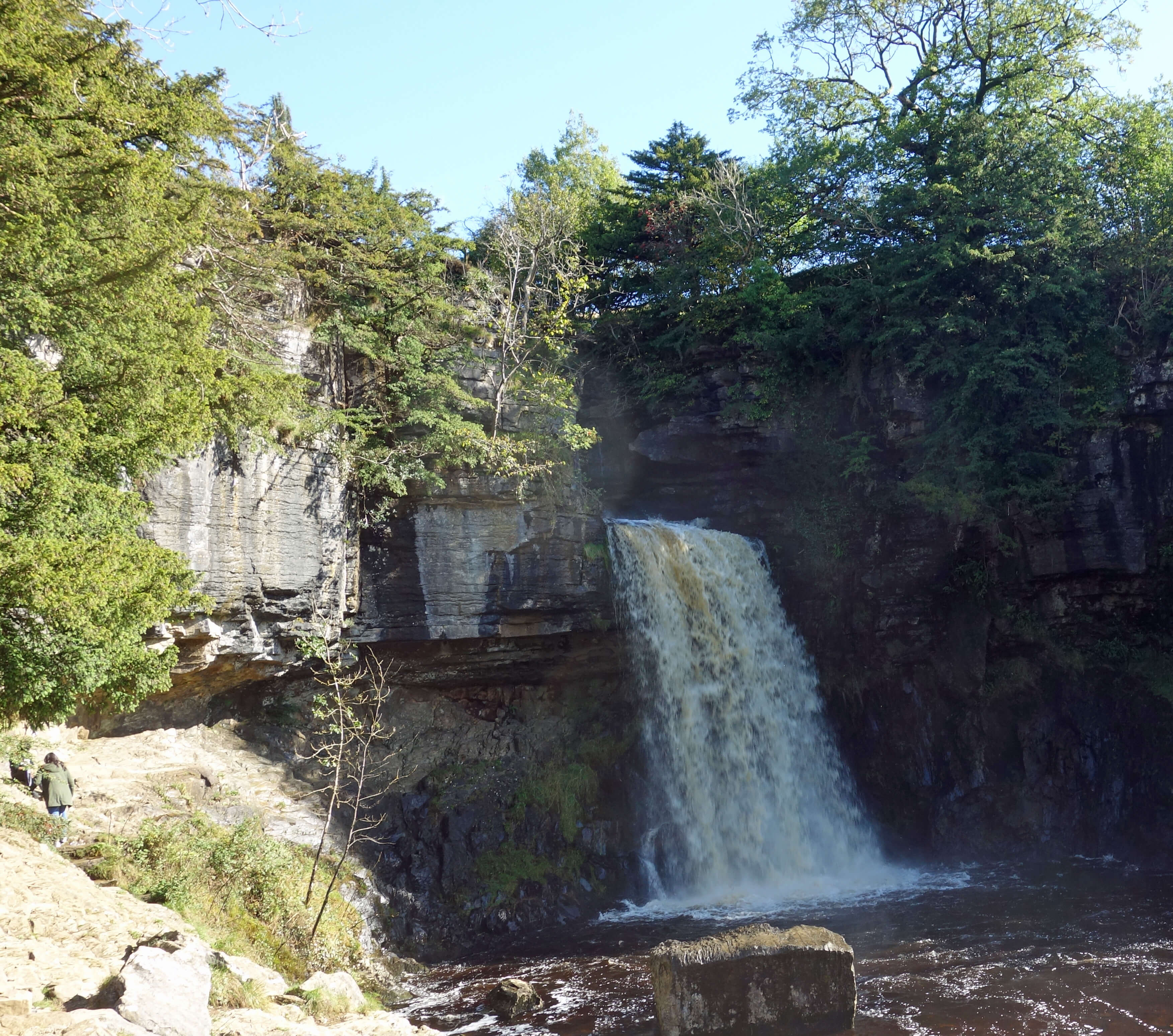 Walking against the general flow of walkers on the Trail, I passed Twisleton Hall and continued down to Thornton Force on Kingsdale Beck. This, at 14 metres, is the largest waterfall on the Trail and the most photogenic. I paused by the waterfall for some time ľ and I will also pause in my narrative, as Hayden (2016) did midway through his book about a walk from John oĺGroats to Landĺs End. He suddenly blurted out ôIt strikes me here ů what a poor hand I am at this travel-writing lark. I have no eye, or ear, or heart for detail. My descriptions are always vagueö. He had walked by many fields, mountains, rivers and woodlands but lamented that he could not identify trees, birds, rocks, flowers, insects, and so on. He confessed ôI am ignorant of these things. And therefore, gentle reader, so must you be.ö

Why? I had assumed that if I tried to rectify my own lamentable ignorance of botany, geology, lepidopterology, ecology, and so on then that would be bound to enhance my appreciation of the environment. Surely it helps to know the difference between dolerite and dolomite, between redshank and redstart, between mullion and muntin, between dark green fritillary and snake headĺs fritillary.

Hayden, however, draws the opposite conclusion. He wants to consider himself a Ĺnature-loverĺ, which he defines as one who prefers to absorb rather than to observe. He draws inspiration from Wordsworth, who decried attending to Ĺsuperficial thingsĺ rather than being attuned to the moods, affections and spirit of a place. Wordsworth was a gardener but I doubt that he was a sufficiently knowledgeable botanist to write about many plants other than the daffodil. Hayden presumes to consider Wordsworth his ôfellow nature-loverö but I hope that it takes more than an equality of ignorance to qualify as a nature-lover.

Something of the same attitude can be found with John Ruskin, who moved to the Lake District in his old age and inherited Wordsworthĺs mantle as the sage of Lakeland. According to Nicholson (1955), although Ruskin approached his subject scientifically, as he was perhaps obliged to do in the late 19th century, his heart wasnĺt really in it: ôhe turned to geology ů not to understand the way the rocks had come into being, but rather how to look at them.ö Likewise, when a boy, he collected various minerals but he was attracted by their prettiness rather than by their physical properties. No doubt, they have a point. I once took a year-long course on crystallography. We studied the angle of this and the symmetry of that but we never once held a crystal and said Ĺwowĺ. 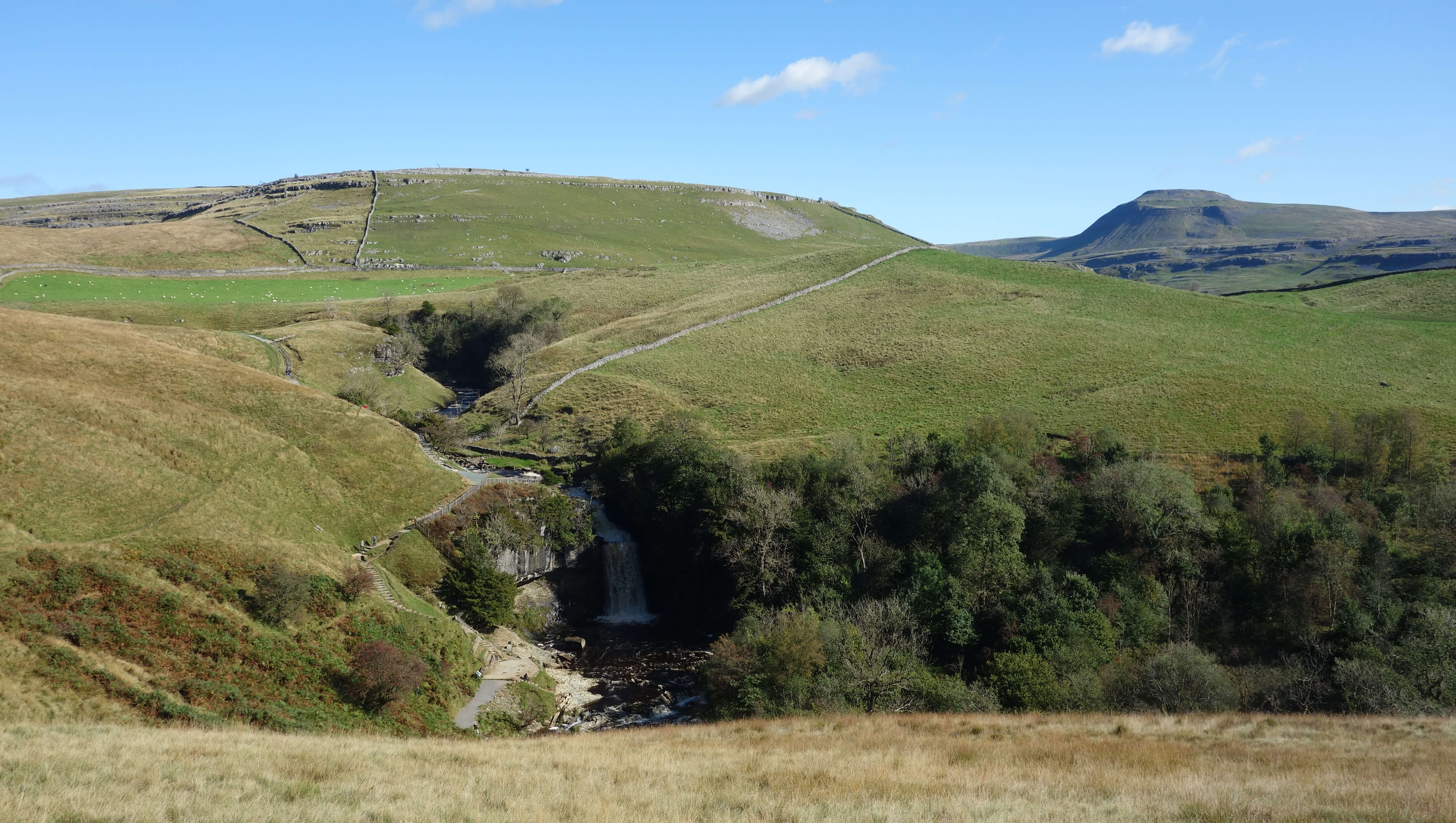 As I sat enthralled by Thornton Force I wondered what there is to know about a waterfall. The adjacent information board tells us little. It relies on J.M.W. Turner, who visited in 1816. It lazily implies that if the esteemed Turner thought it worth visiting then so must we. His sketch is described as Ĺfineĺ by the Turner Trails website although I can make neither head nor tail of it. What do I know about Thornton Force? I know where the water comes from (the slopes of Whernside and Gragareth via Kingsdale) and where it is going (to form the Greta and then to join the Lune). I know that the water is, as it is for all the Ingleton waterfalls, crossing the Craven Faults, which have exposed rocks that erode at different rates, in particular, the Carboniferous limestone and Ordovician slate visible in the wall of Thornton Force.

But does any of that affect my appreciation of Thornton Force? Thornton Force appeals more to the senses than to the rational mind. The sight of the plunging water, ever-changing and yet unchanged for millennia, is mesmerising. The sound, when the waterfall is in spate, is overwhelming too. We might imagine that we can feel the force of the water as it lands and we can certainly feel the spray if we stand close enough. Is there a sensual element in our appreciation of any aspect of the environment?

I left the natural art of Thornton Force to walk over Raven Ray to view a piece of man-made art. Andy Goldsworthyĺs Arch is housed within a hut by the road just past the prominent radio station. This flummoxes me. The arch is almost impossible to see, let alone appreciate, in this hut. It doesnĺt look much of a structure to me. Perhaps we are supposed to regard the hut as part of the artwork. The arch itself had an interesting life, travelling from Dumfries, before coming to rest here. Peering through the hut window is like peeking into a mausoleum.

I walked through Thornton-in-Lonsdale, where a notice in the church porch informs us that Arthur Conan Doyle was married here in 1885. Coincidentally, so was his wife, maiden name Louisa Hawkins. I reached the official entrance to the Ingleton Waterfalls Trail and wandered towards it. I had already seen several signs telling me to pay ú7 (but no-one to pay it to). I somewhat resent paying for what nature has freely provided. In any case, only half a mile of my six-mile walk was not on public land. I donĺt mind paying (a little) for the upkeep of the paths to ensure our safety, especially if any profit went to the local community. The Trail is managed by Ingleton Scenery Company Ltd, registered in Skipton, and profits have enabled the construction of a cafÚ and the Falls Park holiday homes near Beezley Falls. The lady at the turnstile (a turnstile to see waterfalls!) told me that local people pay ú1 a year, which seems fair enough.

Back at the information centre, an assistant was positive about the Trail, as he was bound to be. He said that locals are grateful that it brings so many visitors to Ingleton but felt that the council made a mistake fifty years ago in not gaining ownership. (I donĺt know if that was ever an option. At the time of Humphries (1985) all the shares of the Ingleton Scenery Company were owned by descendants of Samuel Worthington, a member of the 1885 committee that established the Trail. Probably they still are.) When I queried the price, it was sharply pointed out that the Trail is cheaper than the nearby White Scar Caves. Is there a fundamental difference between charging for waterfalls and charging for caves? It's often said that people donĺt appreciate what they donĺt pay for. I do.


&nbsp63.   These Are a Few of My Favourite 'Superficial Things': in Crummackdale
&nbsp61.   Knott Alone
A list of all Saunterings so far