I have a question for members of The Wainwright Society (and for anyone else). If I were bagging Wainwrights and walked from Ambleside to Red Screes (776m), returning via the Kirkstone Pass and Wansfell (487m), then how many Wainwrights may I tick off?

Kirkstone Pass from the slopes of Red Screes

The walk from Ambleside to the top of Red Screes was as straightforward as a Lake District walk can be. I headed north and kept going. That is not to say that it was easy, as I have not climbed a high hill for a while. However, the slope and the terrain of the ridge that passes Snarker Pike are relatively gentle, and all the while the views are gradually widened. At first I could not see Windermere at all because of low mist but this soon dispersed. The more distant views of Bowfell and Fairfield were a little hazy, perhaps because of the still evaporating snow. By the time that the Red Screes top was at last reached, Helvellyn and High Street had come into view, with a prospect of Brothers Water and a glimpse of Ullswater ahead. 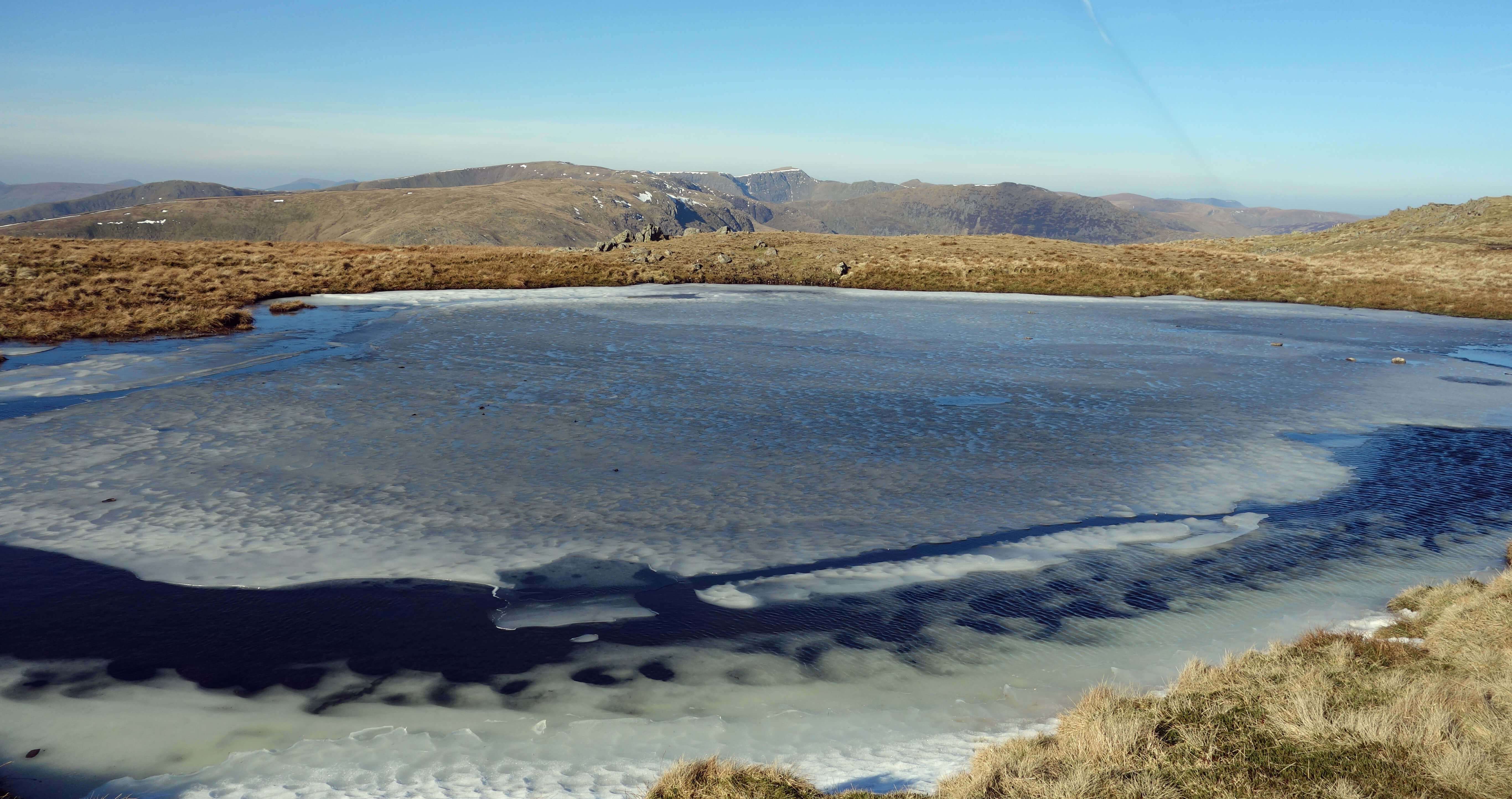 The clamber down from Red Screes to the Kirkstone Pass was precipitous but just needed to be taken steadily. It was a bit of a trudge walking south to Wansfell but at least there were good views back towards Red Screes, enabling me to reflect that I had just walked down that imposing cliff-face. The Ordnance Survey marks the highest point of Wansfell (487m) a mile or so north of Wansfell Pike (482m) but it takes some believing. It must be an optical illusion caused by Wansfell having much higher fells behind (when viewed from the Pike) whereas, from the other direction, Wansfell Pike stands proudly against the sky. Anyway, Wansfell Pike is the better top, with its celebrated view of Windermere.

Now to return to my question. The seven volumes of Wainwright (1955-1966) catalogued 214 fells. Some walkers set out to bag Wainwrights, that is, to get to the top of some of the 214. Some set themselves the challenge of getting to the top of all 214 and thereby becoming a ‘Wainwright completer’. They may then experience the euphoria of Reinhold Messner: “Standing now in diffused light, with the wind at my back, I experience suddenly a feeling of completeness – not a feeling of having achieved something or of being stronger than everyone who was ever here before, not a feeling of having arrived at the ultimate point, not a feeling of supremacy. Just a breath of happiness deep inside my mind and my breast” (Messner, 2010). However, Messner, who was the first climber to ascend all fourteen peaks over 8,000 metres, may have been thinking of mountains rather more challenging than, say, Mungrisdale Common, Lank Rigg, Hen Comb or Grike.

However, if a walker so venerates Wainwright that he or she must conquer all his tops then it behoves them to adopt fully the spirit of Wainwright. Wainwright described one or more routes of ascent for each fell. In all, about 750 different ascents are described for the 214 fells. For some fells he mentions one or more ‘ridge routes’ to nearby tops. He leaves the reader to join the pieces. He does not, for example, mention one of the most well-known Lakeland walks, the Kentmere Horseshoe. Instead, he describes the eight tops that constitute the horseshoe in separate chapters. He is like a musicologist who catalogues 214 chords, sometimes says which two chords go well together, but never gives us a melody.

When a walker has become a true-completer, there is no need to stop there. They can then set out to become a super-true-completer by walking all 750 or so ascents. Do you think anybody has, apart from Wainwright? It may be sacrilegious to say so but I wonder if Wainwright did. If you rule out all the weekends that are too wet, windy, cloudy or icy (and there are plenty of those) then there are hardly enough weekends left in his thirteen years of travail for 750 ascents. Also, it is possible to descend (like I did from Red Screes to the Kirkstone Pass) and imagine it, and later describe it, as an ascent. So, come on you members of this curious cult, become a super-true-completer, perhaps the first ever!

Just to be clear, I’m not against challenges: I’ve set myself a few in the past. A challenge adds interest, provides motivation and, ultimately, a feeling of achievement, although it may also become an obsession. The vague challenge that I half-heartedly raised in the Preamble – that is, to visit every one of the 400 5 km x 5 km squares of my North-West England – has gradually become less vague. It has not distorted my saunters, as I don’t set out caring how many squares I visit, but I do count them afterwards. As it happens, I’ve visited 99 of them since I started sauntering in January 2018.