It is obvious that the character of our North-West England hills and dales is largely determined by the underlying rocks. I should therefore try to gain some basic understanding of our geology – but where should I start? According to the Smith (2010) ‘introductory guide’ to Lakeland rocks, “the Lake District is a rather complicated place. The sort of place where to begin to recognise rock types and to begin geology, you would probably say ‘I wouldn’t start from here’.” On the other hand, somewhere like the Howgills seems to me to be so uniform that I suspect that I’d learn only about a single rock type there. I need somewhere that displays different rocks conveniently side-by-side so that a beginner like me can distinguish between them.

Turnbull (2009) describes just such a walk – from Dufton, around Dufton Pike, and along Great Rundale Beck. In a distance of about three miles several different types of rock are to be seen. Moreover, Dufton, being in the North Pennines Area of Outstanding Natural Beauty, is within a Global Geopark, which UNESCO defines as “a unified area with a geological heritage of international significance” – which sounds promising. There’s even a ‘geodiversity audit’, which is a new concept to me, as is a geopark. I have a lot to learn.

We set out hoping to spot the differences between the various rocks. Having approached Dufton from the south, across the white limestone scars of Orton Fell, we immediately detected that Dufton is different. It is red. Well, the green isn’t red but many of the buildings are. Turnbull tells us – and I am, of course, indebted to Turnbull for such details of the rocks and how they came to be where they are that I feel brave enough to mention here – that the red stone is St Bees Sandstone, 250 million years old. Yes, the St Bees of west Cumbria. What’s it doing over here, by the Pennines? I assume that this sandstone once existed all the way between St Bees and here but has, in between, been eroded away or buried.

The stones in the walls by the path from Dufton, which is part of the Pennine Way, turned from red to grey. The rock here is a shale, called Dufton Shale, reasonably enough, and is, I read, about 450 million years old. St Bees Sandstone and Dufton Shale are sedimentary rocks, created from ocean sediment. Obviously a younger sediment should be on top of an older one but here we have walked uphill to find the older rock. As Turnbull explains, we have crossed a fault, one which has caused the older rock on the east to end up higher relative to the rock on the west.

As the track approached Halsteads we saw that some of the stones in the wall alongside were orange, not grey. Small crystals of mica could be seen in the orange rocks. This is getting complicated. These orange rocks are of Dufton Microgranite and are from an intrusion of molten rock about 390 million years ago. An intrusion has to be into existing older rocks (by definition), therefore once we pass the Dufton Microgranite we return to the shale.

Now we climbed Dufton Pike (481m), battling against a strong, cold wind. There were not many exposed rocks but what there were did look different to the shale below. Turnbull says that these are volcanic rocks, although we could not honestly say that we found the bubble holes (vesicles to the cognoscenti) that he mentions. These are rocks of the Borrowdale Volcanic series, the same series that is found in the most dramatic parts of the Lake District. It is not dramatic on Dufton Pike. It is a smooth, grassy, conical hill. It does, however, provide an excellent view of Cross Fell and up Great Rundale. In the opposite direction, across the green Eden valley, we could not, because of the haze, make out Dufton Pike’s sister hills twenty miles away in the Lake District. The Dufton Pike volcanic rocks are also about 450 million years old but older than the Dufton Shale, indicating that we have crossed another fault. 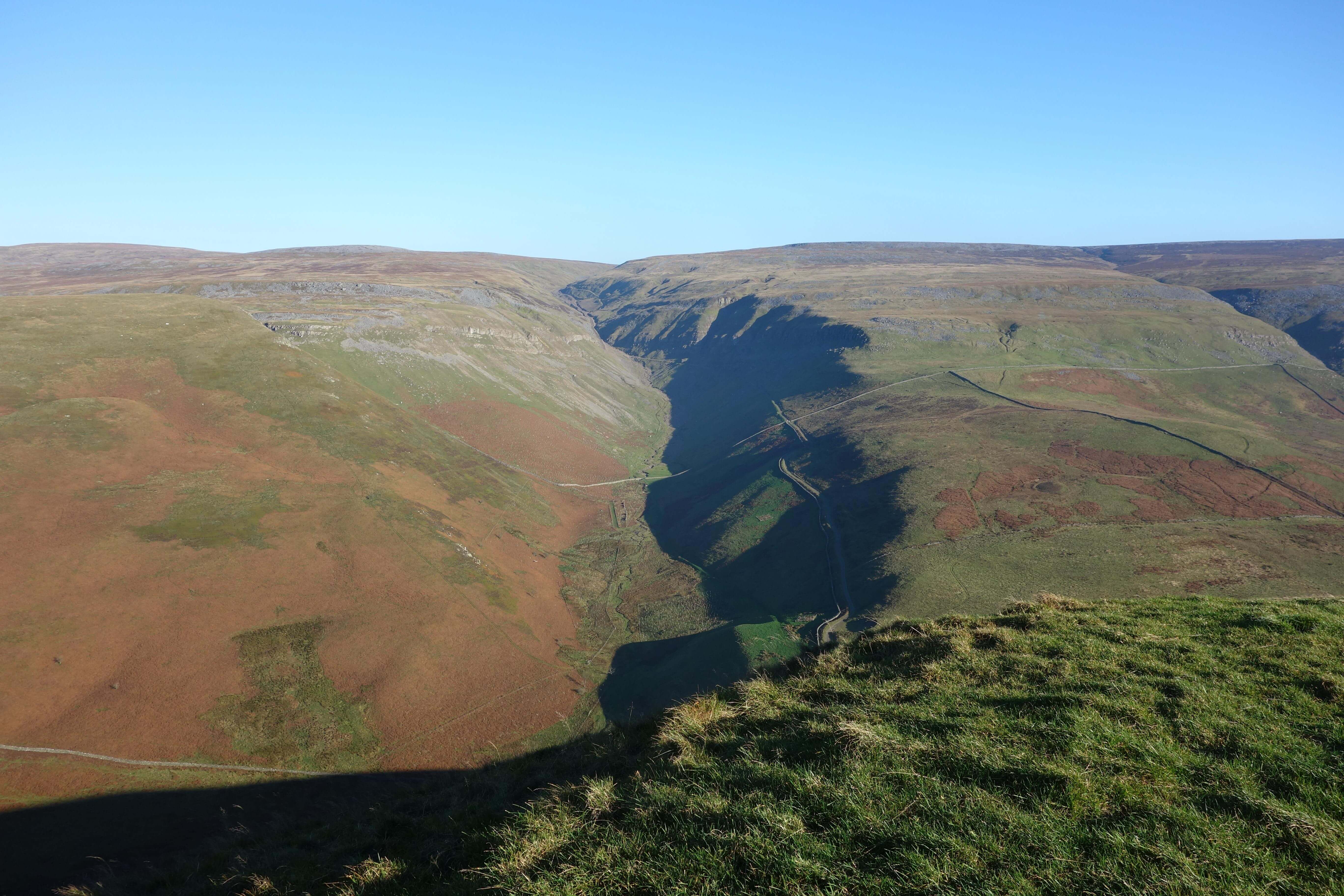 Dropping off Dufton Pike and continuing up the valley of Great Rundale Beck, we came across rocks that look familiar to any walker of the Yorkshire Dales. These are slates and limestone of the Carboniferous period, 350 million years ago. Having dropped down to a younger rock, we must have crossed another fault, a fault that also separates the adjacent Knock Pike and Murton Pike volcanic rock from the rocks of the North Pennines to the east. With all these faults within such a short distance, it is surprising to me that the nearby sedimentary layers of the cliffs on both sides of Great Rundale have survived more or less level. Should I deduce that the North Pennine Faults occurred before these sediments were there, say, 400 million years ago?

We continued up Great Rundale, surprised that the beck within was virtually dry when it clearly causes significant erosion when in the mood, and past a prominent limekiln to reach old mine workings with piles of grey stones that we assumed are of the gritstone that forms the peaty plateau above. Turnbull admits to some difficulty in telling the limestone and gritstone apart so we didn’t attempt a close study. We also didn’t attempt to continue up and over to High Cup Nick as Turnbull did – we had seen enough rocks for one day. So we returned down Great Rundale and around the eastern side of Dufton Pike. We walked past the nicely-named Pus Gill, which is a Site of Special Scientific Interest for its geology. Here there are rocks of Onnian and Lower Longvillian age, forming the most extensive Pusgillian section in the north of England. As you can see, my geology is coming on in leaps and bounds. (OK, I admit it: I pinched that from the Pus Gill SSSI citation.)


&nbsp36.   The Flow and Ebb and Flow of Morecambe
&nbsp34.   Thieveley Pike and the Singing Ringing Tree
A list of all Saunterings so far