These days I am pootling about on the foothills of Caton Moor, if Caton Moor is considered high enough to have foothills. It is only 361 metres at the trig point. It is a smooth hump, with moor-grass all over, and hardly a rock exposed anywhere. On the other side of Littledale, below Ward’s Stone, there are jumbles of millstone grit enabling some scrambling but not on Caton Moor. In short, Caton Moor is benign and not a ‘real mountain’. I haven’t tackled one of those for over a year and there is no prospect of doing so at the moment, so I thought I’d read about them instead.

Caton Moor, with its windmills, from the slopes up to Ward's Stone (Whernside is directly behind the highest point of Caton Moor, with Ingleborough to the right in cloud)

The book Between the Sunset and the Sea (Ingram, 2015) describes expeditions up sixteen British mountains. It has been well-reviewed and the author, Simon Ingram, is the editor of Trail, the “bestselling, hillwalking magazine”, and therefore knows what he is writing about. The walks themselves provide the narrative propulsion but there are long diversions to discuss associated topics, such as the mass trespasses, the nature of mountain legends, the work of rescue teams, and so on. So far, I’ve only read the first four chapters but I think I have detected a theme.

The first four mountains are Beinn Dearg (914 metres) in the north-west Scottish Highlands, Black Mountain (802 metres) of the Brecon Beacons, Cadair Idris (893 metres) and Snowdon (1,085 metres). He sets off up the first, Beinn Dearg, alone and in rain, noting that the slopes ahead appeared “steep and outwardly impenetrable”. The ascent becomes increasingly scary, with the text peppered with phrases such as “alarming void”, “exciting, nerve-wracking”, “a fragile pivot between the thrilling and the frightening”, “gingerly reversed”, and so on. After five pages of this, he reaches the top and, since it’s getting late, he descends, with “increasing alarm”, passing “a drop of similar horror”, and commenting that “descents like this are what fatal accident statistics are made of”. He realises that he was under-prepared for this “unexpectedly hairy” outing – “a lesson I could learn from provided I could safely find a way out of this jam”. Which, of course, he did.

Next it’s the Black Mountain. He wanted to see the stars of the night sky from the mountain top but he set off in rain and wind. He was soon as “wet as hell” because he had forgotten to bring waterproof trousers. The wind, which he estimated to be 50 mph, gusting to 70 mph, threatened to blow him off the mountain. But he reached the top, where he “realised just how silly [his] decision to push on had been” and that “it wouldn’t be long before hypothermia began to gnaw”. So he aborted the plan to camp at the top in order to admire the stars and descended. He found that walking back to his car “was a hell of a lot harder than walking from it”. It was now “almost totally dark” and, since the batteries in his head torch were now almost flat, “stream crossings were done in a darkness that was too profound for comfort”.

He set out for Cadair Idris with the intention of appreciating the legends that surround the mountain and in particular to see the sunset from the top. However, he had dallied on his way to the foot of the mountain and his “plan for getting to the summit by sunset was now on a perilously tight schedule”. He hurries to the top – which at 893 metres requires quite a lot of hurrying – and there he finds that instead of carrying up his warm clothing for the night he has by mistake brought a tent, which he didn’t need because he intended to sleep in a hut on the mountain top. He comments that “had this been a cold or rainy night … I could have been in quite a bit of trouble”. But he survived. 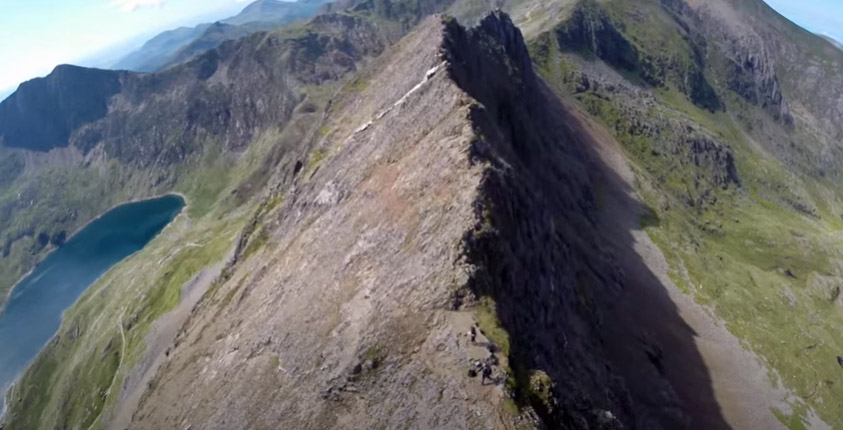 On Snowdon, Ingram planned to walk, alone again, across Crib Goch. To get us in the mood, he first discusses the work of mountain rescue teams, who deal with nearly sixty fatalities a year. He twice speculates whether he will become one of them on Crib Goch because it is “a personification of all that is deviously hazardous”. Crib Goch is, he says, 500 metres of exposed aręte with sheer drops of several hundred metres on both sides. The evening before the planned assault a friend tells him that the weather forecast (which he has not himself checked) is for rain and gales the following morning – so he decides to tackle half the crest that evening, with darkness approaching, then camp overnight halfway along (somehow), and do the rest early next morning. So we are then treated, over five pages, to a step-by-step account of his traverse of half of Crib Goch, which “was giving [him] dreadful feelings”.

You may not appreciate what an impressive achievement this is. I struggle myself to write a sentence sometimes about the step-by-steps of my own walking. Ingram manages to write 2,500 words about 250 metres of walking, each word building the tension like Ravel’s Bolero, but without hesitation, deviation or repetition, and without the dramatic end of Bolero. How does he remember or record the intricate details of every lump of rock whilst grappling to avoid falling off? As I say, most impressive.

As he sets up camp, he finds that he has a text message from his friend telling him that the gale is now forecast to be earlier. So he decamps and sets off immediately to tackle the second half, with the “light fading rapidly”. We have more pages of danger, peril and horror. I suppose that readers are expected to have a white-knuckled grip of their armchair – but, of course, we know that, like James Bond in a car chase, our hero will come through unscathed. He concludes that his experience on Crib Goch and the earlier mountains will help on the “higher, wilder peaks [that] were coming”. I can hardly wait!

I find it strange that a professional walker is not embarrassed to admit to such recklessness and to a series of elementary, foolhardy mistakes. Maybe what happened is that his magazine published a ‘do not …’ list intended to help novice hill walkers avoid risk and he mistook it for a ‘do …’ list, and set about ticking them off one-by-one. In that way he enhanced the danger, and after all it is the whole purpose of mountain walking to experience and to overcome danger. For Ingram, that is – not for me.

P.S. The title, 'Never mind the danger', is a phrase in 'On the Ball, City', said to be the oldest football song still in use today (well, not exactly today, unless fans sing it in front of their TV sets). The City referred to is, of course, Norwich City.